Lis Is The Boss Of Me

I got an e-mail from Lis this morning instructing me to please call her as soon as I was awake and conscious. So I did, of course. Now, there's been a plan in the hopper for over a year for Lis to go to Cuba with a delegation of musicians whom she knows, one of whom has been there many times over the years. Speaks Spanish fluently, knows his way around, etc.

And there's always been the possibility that there would be a place for me to travel with them. Just the thought of it has been making me anxious for that entire year and suddenly, there's an opening for sure and it's next week and I could go. 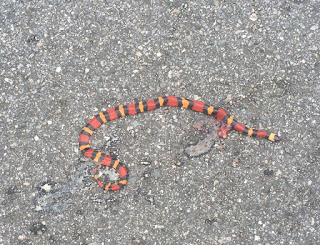 Pretty little king snake. It started to rain a little. The streets starting steaming. It was so hot. Sweat was pouring off of me. It started raining harder. I came home.
I'd gotten an e-mail from the guy who's in charge of this whole delegation to Cuba. He's in another country right now but he sent me a flyer of the trip. My heart was already starting to say, "What if? What if? What if?"
I looked at the flyer.
My heart started to say, "You can't not do this. You will regret it forever if you don't go to Cuba with Lis."

I got in touch with the man in charge via e-mail and then he called me.
In the three hours since then I've downloaded and filled out documents and printed them on my neighbor's printer because mine doesn't work. I've found my passport. I've called Lis. I've promised the man in charge that unless some dire event happens to me or someone in my family between now and next Thursday, I will be on the flight from Miami to Cuba.

Cuba. I am going to Cuba. I will be staying with Lis in...a place. I am not sure about that. Not a hotel. A room. Somewhere. In Havana. The shows Lis are playing in do not begin until 11:00 p.m. Did you hear that? I go to bed at 10:00 every night. There will be tours. There will be meals. There will be drinks. There will be...CUBA!

If. Of course. If, all of my documents get to the right place by the right time. If I am approved. If I don't die of anxiety before then.

I have been feeling on the verge of passing out ever since I got home from that walk.

What do I need to do now? Outfits? It's going to be hot. I'll take all my linen dresses. Also, my Rolling Stones T-shirts. Will that be allowed? I signed a form saying I won't buy drugs or do drugs or criticize the government or engage in prostitution. Among other things.
Okay. No problem. I won't do any of those things.
I need a book about Havana. I don't know anything about Havana except cigars and old cars and amazing music and, yeah...like that.

It'll be fine. One small step at a time. I'm going to do it unless there are glitches which disallow it.

Meanwhile, it's Jason's birthday. We're going to supper tonight to celebrate that precious man, that amazing father, that wonderful husband.

All right. That's all. For now.

Can you believe this?
I can't.

Love...Ms. Moon, who is quaking in her boots, her blood, her heart