And We Welcome A New Family Member, Plus Other Things 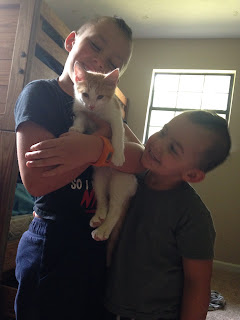 An incident happened last weekend which I have not written about because it was so sad and because Jason felt so bad. What happened was that he got up before the crack of dawn to get to work and as he backed out of the driveway, he realized that their cat Parker had been under the car and well...Parker was gone.

Lily called me to tell me and she was devastated and I felt just horrible for their whole family and for Jason especially. He had told Lily to please not tell the boys because he wanted to tell them. It was his responsibility. And so all day she felt as if she were committing a sin of omission, not telling Owen and Gibson that their Parker was gone. When Jason got home and told them, Owen called me, sobbing his little heart out. I told him how sorry I was and that he just had to feel the sadness and it was okay and that one day he'd be able to think about Parker and the happy times they had with him and it would be better.
They went out to supper that night and then Jason gave the boys those Mohawk haircuts they wanted and hearts were soothed and today, they went and got a new kitten from a litter that a friend of Lily's grandmother had at her house. The boys are so happy.
They think he's a male and if so, his name will probably be Sonny Boy but of course we thought their cat Rusty was a girl until Lily took him to be be spayed and it turned out that he could only be neutered.
So there's the new family member and may Parker rest in peace. He was a fine, fat fellow who was a very good pet.

I took a walk today, first one in forever. It is already so hot and I never get started soon enough. The black-eyed susans are blooming. 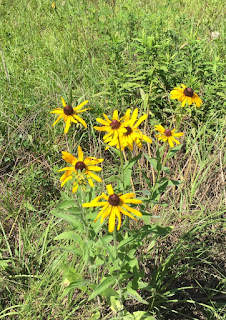 The beauty berry is coming along. 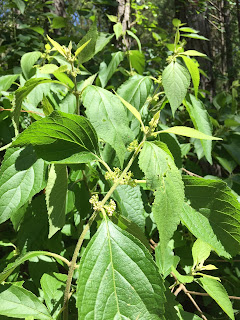 How many years have y'all been coming on these walks with me?
I should have walked down to the creek through the woods path with the "No Trespassing" sign on it but I didn't have the energy for that today. I'm sure the creek is roaring and full with the rain we got last weekend. Maybe tomorrow.

Right when I was reaching my final stretch, I came upon a man who was digging worms in the rich and ripe compost of fallen leaves and dirt in the ditch on Main Street. He uses the worms for fishing of course and said that he's been hauling in bass, catfish and bream from Lloyd Creek. He told me that I needed to get home because it was too hot and a lady down the street had had a stroke and that the doctor said it was due to the heat and the heat is no joke. That he himself goes fishing at 7 a.m. and goes home at 10, no matter what he's caught or hasn't caught. I fell in love with him a little bit, not only because of his concern, but because when I told him that my husband takes our grandsons fishing he said, "You have grandchildren? You don't look old enough to have grandchildren!" which was a bold-faced lie but I loved him for it. I think it was more a matter of the fact that most grandmothers (in Lloyd, anyway) don't go walking in the almost noon day sun.
They have more sense than I do.

So it was a day like that and I am happy to report that as of right now, all of the young chickens are still alive. The older six run together in one flockish group and the littler three have their own chicken club. They are sticking to the overgrown area between their coop and the garage and the railroad tracks, feeling safer from hawks there, I am sure. On my walk today I saw a beautiful hawk trying to capture a cardinal and I felt bad for that little redbird. I stuck around and watched for a few moments but then went on, not sure I wanted to see the outcome anyway. Oh! The cruel beaks and talons of those birds!

I hung laundry and took a shower and went to Publix and picked beans and gathered eggs and fed grapes to all of the chickens. Gotta let my old girls know I love them too.

Here's a picture of August that Jessie sent me today. They were at a crafts gathering in Asheville. 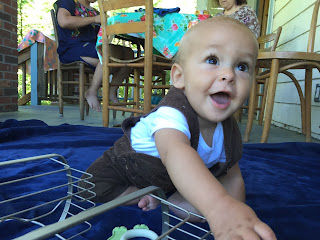 That happy little boy! And he's wearing his overalls. I miss that boy so.

And oh! I forgot to report that Jessie saw Peter Dinklage in the grocery store in Asheville yesterday. She texted me about it. She said that people were leaving him alone to do his shopping but that he'd caught her dancing to the Muzak. I told her that I bet he'd liked that. I think that Mr. Dinklage is rather swoony and of the few times I've watched any of the Game of Thrones, he's been my favorite actor, by far and the character he plays is my favorite in the series as I've read it. Tyrion Lannister. It gives me a little giggle to think of him espying my daughter dancing in the aisle of the grocery store with her son probably strapped to her chest.

And there you have it- another day in the life. Cats, chickens, grandchildren, worms, fishing, blooming things, and Famous Hollywood Actors.