I wanted to add something to what I wrote earlier today which was inspired by a picture posted on Facebook of a man whom I knew when I was young. He was the father of friends of mine and one of his daughters posted the picture.
I looked at it and burst into tears because that man was the epitome of what I would have wanted in a daddy when I was young. He was kind, he was nonjudgemental, he was incredibly intelligent, he was loving towards his wife and all of his children AND he accepted the friends of his children unconditionally and with respect. Once, when we were teenagers and many of us were from homes that were far from perfect and our behavior was beginning to reflect that, he and his wife gathered all of us together one evening and told us in no uncertain terms that they loved us and that if any of us needed help any where in any way at any time, we were to call them and they would be there for us. That we were all amazing people and not to forget that.

This man was a Christian and when I think of the "good" and "real" Christians I have ever known, I think of him and his wife and of Jimmy Carter.

I will never forget that man's kindness nor his honesty nor his true caring. His wife, Ann, was just like him. And I would like to point out that you do not have to be someone's father to show fatherly love and care and concern for them. A man who will treat a child who is not his own the way this man did will never know the influence he can have on a life. 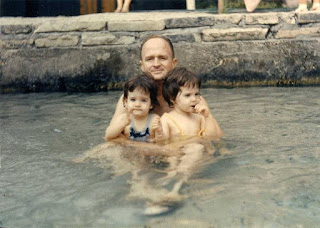 Here's the picture. His name was Carroll Teeter. He was holding his twin daughters who, no surprise, grew up to become amazing, loving, talented humans beings who also influenced my life far more than they will ever know.

I guess the point is, is that it does indeed take a village and that showing kindness towards children is one of the best things that anyone can do for the human race and that love offered without thought of reward is a gift that anyone can give and which will reach out into the universe in a way that hate and mistreatment and cruelty never, ever will.

The last time I saw Mr. and Mrs. Teeter, I had gone by to visit them in Winter Haven. I was all grown up and a mother by then and had changed considerably by that time of course, but when Mrs. Teeter saw me she immediately said, "Is that our MARY?" and I will never forget that either and I was welcomed into their arms and home as if I had never left, as if I was truly one of theirs.

And I will never forget and I will always be eternally grateful that I knew them and was loved by them and my memories of them inspire me to try and be a better person myself, to be accepting, to be respectful, to be loving. That love is the strongest thing of all.

I wish I could be half the humans they were. I wish I could tell them how much I loved them, how they found a place in my heart which was empty and so very dark and made their way into that place and filled it with a light I did not know existed and in doing that, they helped me to become a better person, a better parent, and a woman who could recognize and fall in love with a good and light-filled man myself.

And I carry all of that with me to this day and I just wanted to say that, to testify, to share a little of that light which still resides in my heart to this very moment so strongly that sometimes the mere thought of them and their kindness bursts out and I cry and that is the way it should be.