I believe I may have received a document via Dropbox yesterday concerning what I'm supposed to be taking to Cuba.
If I could figure out how to open the fucker, all might be revealed. As it is, I am clueless.

So. Saturday morning. Have I told you that I have weaned myself off my anti-depressant? This happened almost by accident and I have hesitated to mention this because (a) I do not want to jinx things and, (b) what works for me might not work for you, and also, (c) this is early days and it may have been a bad idea.

I had no idea I was about to travel to Cuba when this weaning occurred. None.
But so far, I am doing quite well and seem to have less muscle and joint pain as well as improved dreams AND when I wake up, I do not feel as if I want to slash my wrists every morning. This may be a by-product of the better dreams. I would not be surprised.

Also, I do not seem to be any more anxious or depressed than I have been and in fact, my anxiousness could be more accurately described as "nervousness" which I think is entirely appropriate in my present situation.

What is the difference between anxiety and nervousness? Well, it's sort of hard to say. Nervousness seems uncomfortable but manageable and normal. Something you might feel before going onstage or before meeting someone for the first time whom you truly admire, or going to a job interview, or going on a first date. Your stomach may hurt. You may experience feelings of not being adequately prepared. There may even be a tinge of excitement coloring the feeling.
Anxiety, on the other hand, may have no basis whatsoever in logic. It is, by definition, irrational. It overtakes the mind and the body. It is the same feeling you would have if a large wild animal was threatening you with teeth and with claws. It is, in short, panic. Constant and unrelenting panic.
It is crippling for body and for mind. It is the constant coursing through of the body of all of the fight-or-flight hormones when there is no reason for them and nothing to do with them except to shake and fear and in my experience, there is no alternative but to seek help.

So yeah. I'm not feeling that way. Nervousness? Yes. Oh hell yes. Anxiety? Maybe a teeny bit but not so much.
I think my adrenals are perhaps working overtime. I find my focus is all over the place. My stomach is a mess. I can feel a flush of nerves rush from head to fingers and toes more than I would like. I become exhausted easily. My ability to cope with outside distraction is limited.
But I can live with this.
I can make lists. I can almost laugh at myself.

So I think I'm all right for the moment. But it's odd. I can feel my brain resetting itself into the new reality of being without the medication. This on top of everything else is somewhat unsettling but I am being patient with myself and recognizing it all for what it is.
But I tell you what- if the anxiety returns, OR the depression (which is a whole different monster), I will go back on the drugs.

Meanwhile, here are some pictures I took today of the beautiful kingdom where I am so fortunate to live. 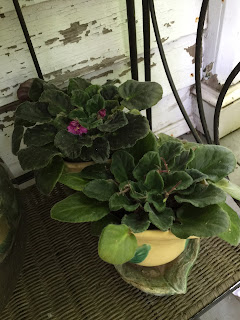 The African violets entrusted into my care by Jessie. I have not yet killed them and in fact, they look pretty healthy. This is a first for me and African violets. My mother was a master at growing them. Hers grew to the size of dinner plates and bloomed constantly and profusely. She could start a new plant with a leaf and often did. Which of course is probably why I've killed every one I've ever tried to grow. I believe the success with these is probably due to the fact that I put them out on that new plant stand where they are almost completely ignored. 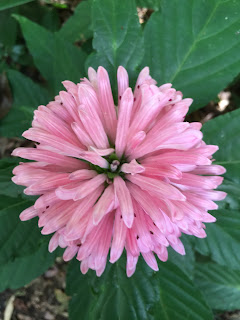 What is this plant? I'm sure someone has told me before but I can't remember. It's a beautiful bloom. You can get lost in it. 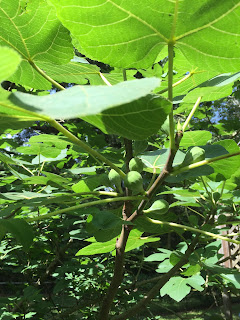 The figs are swelling. The branches are about to bend under their lovely weight. 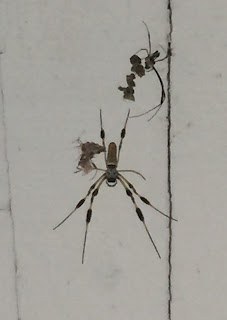 The lady Golden Orb Weavers have selected their websites (haha!) and have begun to weave their strong strands to create their summer homes. They are still small but will grow to massive proportions as we all know. Their webs are already strong enough to make me bounce off of them if I inadvertently and inattentively run into one. 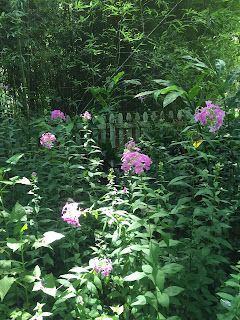 The wild phlox which I transplanted here 12 years ago from my old yard is starting to bloom and in the places I've let it go untended, it is becoming jungle-like.

I think I will do some inside work this afternoon and then later on, go out and do garden work. I crave it. This will require far more bug repellant than I'd like but it's either use the shit or don't go out. The mosquitoes are that bad.
Mr. Moon is mowing the yard right now and later on he is going to a friend's house to help him with his dock in some way that I am unclear about and then do some catfish fishing. If he gets enough, perhaps we shall have a little catfish dinner tomorrow night for Father's Day.

I wish I could open that Dropbox and find out exactly what it is I need to know about this trip. It would sure make the list-making easier.
But I am not freaking out about it.
Yet.