Big, BIG doin's in the land of heart-blessing here today.
First off, I slept until 10:00! I mean, coma-slept. After a rocky start on getting to sleep after I heard something either hit the house, the ground, the floor, or...something...last night and had to get up and walk around with a flashlight to see what I could see (nothing but Maurice and Jack heard it too), I fell back onto the pillow and checked out of this world for a long time. When I finally woke up, I was stressed out already due to the fact that (a) it was 10:00 and people were texting me about plans for the day and evening, and (b) I'd been dreaming that I had totally not shown up for a shift to work at Publix and I felt terrible but dammit! I had to take care of the baby and I could not find my uniform!
Am I channeling Lily in my dreams?

So. Okay. We have two blueberry bushes which have survived for at least eight years and finally, after all this time, I have a crop! 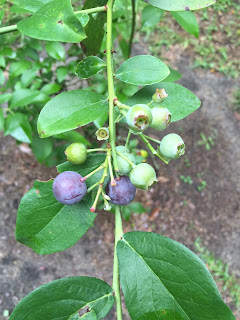 Two ripe blueberries! I sent the picture to Mr. Moon who advised me not to get too full.
I'm so proud.

Then, after much deliberation, I decided to open the coop for the young chicks to come out and explore the world. And so I did.
They are being very cautious. 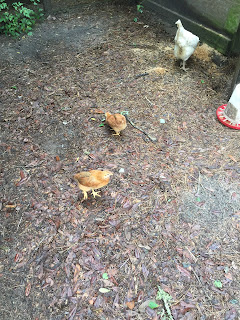 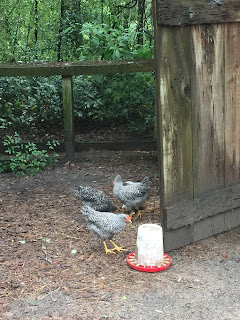 They come out, they go back in. They have to contemplate such freedom.
So exciting! I hope with all of my heart that they stay safe because if one of those local feral cats or a hawk gets them, it will all be my fault and there you go.

On top of all of this, tonight we are gathering at a restaurant where Hank runs trivia to eat pizza and perhaps stay for the trivia portion of the evening. To make things even more exciting, I believe I may wear my new T-shirt which I started to write about in a post on Friday.
Here's what I wrote in the draft I still have:

"So. Not to change the subject, but do you remember when Steve Reed wrote this post?
He only went because I wouldn't quit badgering him about it and it seems like he had a good time and he's such a good sport that he sent me a package with T-shirts he bought there and buttons for the boys and after a month and a half, they finally arrived!
I ran by the post office today after I took the trash and there was my package. I was so thrilled I sat in the parking lot and ripped it open.
Here's one of the shirts he sent me. 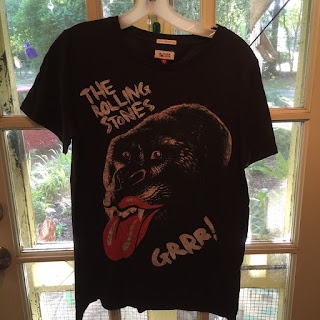 It's the twin to the one I bought Owen years ago and which he still wears.

That made my day."

So. Owen and I could wear our matching Rolling Stones T-shirts in fine Grandmother/Grandson matching outfit tradition and wouldn't that be swell?

And to top everything off, I just got a picture from Lily who is at the river with the kids and her friend Kelly and her son. 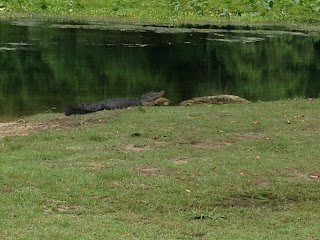 Can you see it?
So they aren't swimming as of yet.

Oh, Florida. What a great state to live in!

Holy fuck! I just saw Lisa Marie jump up and snatch one of my blueberries! That bitch!

I better go eat the other one.

And oh- the tropical storm has passed. We got a lot of rain and that was nice and no wind and that is better.

All right. That's it for now.

May all be well with you and yours and I hereby officially bless everyone's heart, including my own.