That Was The Time For My Tears 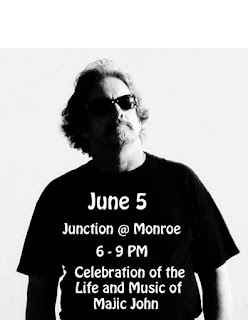 So, yes. I said I wasn't going to the Celebration of Life yesterday. I just couldn't deal.
Lis was having none of that. "You need to grieve with your friends," she said.
As we all know, Lis is the boss of me. Always and forever.
It was a potluck gathering and I made a spinach and rice casserole, a hippie apple cake with caramel frosting. We got dressed and all got into the car and found the venue in Tallahassee. I started crying as soon as I got out of the car and saw one of our oldest friends whom I haven't seen in forever and he hugged me so hard. And that's what it was like.
I swear to you. I sobbed for an hour. I couldn't stop. Everyone must have thought that John and I were a lot closer than we were but that wasn't it. It was just...
John was such a part of my life for so long. Those were the days when community was everything and my community was a musical family. There were bands, there were children, there were road trips, there were gardens and parties and celebrations and sharing of houses and food and stories and songs and love.
And so many of those people were there last night.
The first band that played was a group of people who were playing together down in the woods and swamps of Sopchoppy when I got here in 1974. Living in handmade houses (as so many people were then), they probably just got electricity to plug in their amps.
Priorities, people.
John had been a member of their band for awhile and they put on a short set that brought the house down. 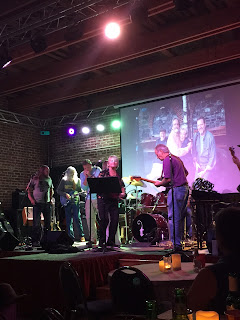 They were amazing and yes, I cried throughout the whole thing. I just couldn't believe the power they brought to music after so many years. Their original bass player died some years ago but his son took his place and did his memory proud.
Unlike most of these services, there weren't a whole lot of testimonials about Majic John Jones. It was as if everyone there knew what a gentleman he was, what a truly good guy, what an amazing musician he'd been, how very sweet and funny and intelligent he was and there was no real need to discuss it.
He just was.
All the good stuff.
As I said in a former post, I don't have one negative memory associated with that man. And I knew him well.
He had his kids late in life and adored them. I got to meet them last night and got to talk to his daughter for a long, long time. And listen. Mostly, I held her hand and listened.
And cried.
Every time I greeted an old friend it seemed like the same thing got said. "How you doing?"
"I'm still here."
And of course, within those few words, came the entire universe of acknowledging those who are not, that list growing longer every day now.
There were stories, of course, passed around among all of us. My friend James and I were talking to another old friend and James was laughing. He told me that once he'd asked the other guy we were talking to if he knew a keyboard player.
"Hold on, be right back," said the other guy. They were down in the swamp in Sopchoppy at that moment.
"And FOUR hours later," James said, "Here comes Floyd with a guy with a Hammond B3 and a Leslie amp. And that was how I met John."

For those of you who do not know, the combined weight of those two things is probably about half a ton. I am not exaggerating. 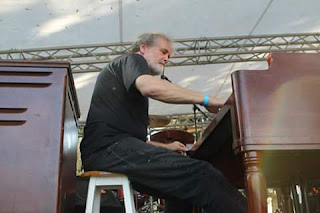 There was John. And that's exactly what he looked like when he played. No histrionics, no posing or attention grabbing or bullshit. Just solid music coming forth from his talented self.

So James played and Wharton played (and I got some good video of them playing together but it's too big a file to send) and my ex-husband played and a lot of people played and there was some of the finest music in the world going on and there was food and drink and laughter and tears. I had told Lis when we were getting ready to leave the house that I knew I was going to thank her for making me go and of course I did. About fifty times.

And here we are today, this tropical storm, named Colin, bringing us rain and more rain. Lon and Lis loaded up and left and I cried a little more.
It's been such a sweet, heart-full weekend. 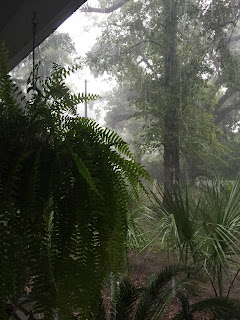 The rain is comforting and my eyes are still teary. It's a perfect day to withdraw into this gray curtain of water with the frogs singing and the magnolias blooming and the smell of wet dirt like a promise that as bad as things may be, there will be growth and renewal.
And life.
The cats are taking it easy. 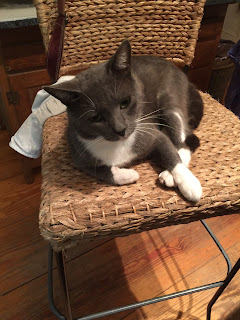 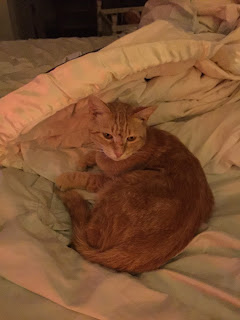 They are wise in the ways of rainy days.
Last night Maurice got in bed with me and licked my face. I feel certain she was enjoying the salt from my tears but still- she's never done that before. She's more of a slasher than a licker but last night she gentled herself for me.
And during the whole thing last night, my husband was there to hold on to me as I cried, to bring me food and another beer when I wanted it. And Lis protected me and some young woman I do not know said, "You look like you could use a hug," and gave me one.
James said, "You're going to make ME cry, stop it," and then he cried too.

We've lost a good one but some of us- we're still here. And although we always say this when someone dies- we'll never forget John Jones as long we ourselves are living and his memory will rest tenderly in our souls.

Thank you for making me go, Lis. And thank you, Lon, for re-evaluating the situation and deciding to stay another night.
And thank you, Majic John, for being exactly who you were because you were splendid in all ways.