Down To The River. Again 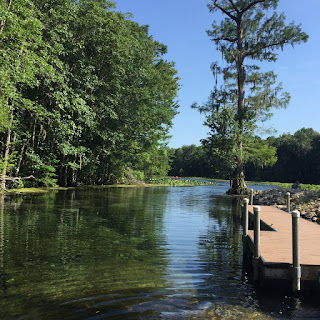 My walk did not dead me but it came close. I was so hot when I got home that I thought I might become deaded but of course I didn't. I did a few things here and then we gathered at the river again- one last time before Jessie and Vergil and August take off for Asheville.

The yellow flies were fierce when we got there and I got bit on each hip. I am not kidding. Matching bites that swelled up and itched so I got in the cold water and stayed for a long time and I tell you- better than Benadryl. We dipped and chatted and held babies and ate chips of questionable color. 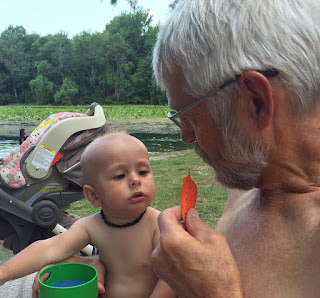 We did not let the babies eat any although August was fascinated by the neon orange food Boppie was putting in his mouth. We kept them all for ourselves and laughed at ourselves for eating such trash. Ay-yi.
We ate watermelon too. Does that help?
No. No it does not.

The boys played in the water and the sand and made new friends. Gibson, at one point, told a girl that she had a big belly, but the way he said it was just the same as if he'd told her that she had blonde hair. Lily told him afterwards that it wasn't polite to tell people things about their body and that it could hurt their feelings.
"Did I make someone feel bad?" he asked, completely mystified.
"You didn't mean to but you might have," his mother told him.
He registered the information and got on with his life.

August got over his complete dislike of the water and with the help and arms of his mama and me he belly kicked through the water a bit. We cheered for him and he seemed pleased. Maggie likes the cold water just fine and was happy the whole afternoon. 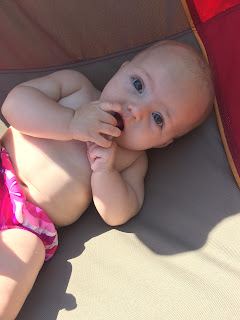 She and August are both, on the whole, extremely easy-going babies.
We are so lucky in that regard, as we are lucky in so many ways.

The boys and their Bop went over to the boat ramp where there's a little spring head to look for fish in the clear water. 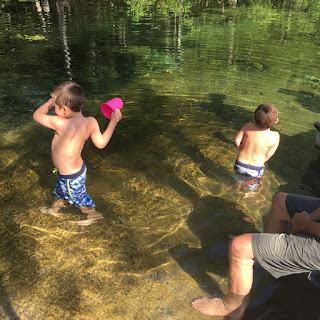 Here's a picture of Maggie and me. 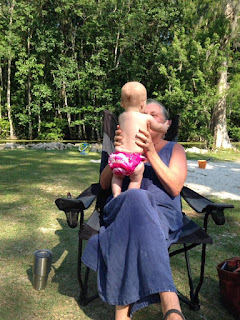 Lily also posted a picture on FB of me wearing a bathing suit holding August. The gall of that child! You will not be seeing it here.

So it was a good afternoon but greatly tempered by the fact that it is our last hurrah with August at the river until the very end of the summer. They are leaving tomorrow evening and I am going over to Jessie's tomorrow to help her pack or at least to amuse August while she packs.
We kept doing the math today of how old August will be when he gets back and what he'll be doing and how old Magnolia will be and what she'll be doing. Will August be walking? Will Magnolia be crawling?
It is all so hard to wrap our minds around.

As we were leaving, I saw a hat someone had left on a rock. 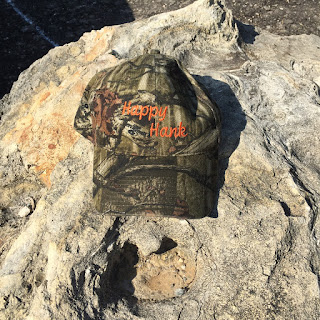 Hank- is it yours?

We missed him today but he had trivia to write.

Well. There will be plenty more trips to the river but for a few months, our Jessie and our August and our Vergil will not be there. We shall miss them so.

I mused to Mr. Moon last night, asking, "Do you think I'll cry a lot when Jessie is gone?"
"I hope not!" he said.
I told Jessie that today and she laughed and said, "Well, you can if you want to but you don't have to."

As always, my children are my teachers.
And now my grandchildren too. I should be so much wiser by now than I am.
I am doing my best, though.