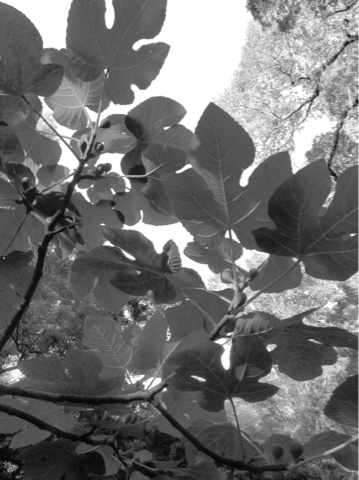 The fig trees are full of fruit and I have great hopes for pints and pints of fig preserves this year. I am writing this on my iPad and have taken the pictures with it too and the camera on it is not making me happy. The camera on my phone is useless at the moment because my storage is full and it won't let me take pictures even though I now have Google photos installed and if I knew how to just transfer all of those photos on my phone to Google, the problem would be solved.
This is hardly an insurmountable problem. I just need to figure it out but between recent events and the heat, I am feeling listless and too languid to do so.
I will.
I could have driven back into town this evening to get my repaired MacBook Magic Box but I spent most of the day in town and am feeling too...listless and languid to make that drive again, let us not even discuss the putting of a bra-like garment on in this heat.
I needed a new trackpad. Mine was not tracking properly and was also sending "phantom instruction" (or was it imput?) making it impossible to use.
Reminds me of my brain.
Ah well. I had a very fine time with Lily and her children today. Lily had an appointment to get the results of some Pre-K testing that Gibson did recently and the boys and I waited in the van while she and Maggie went in for that. Turns out that Gibson is excellent in all regards and the boys and I played cards and read a book about frogs while we waited and I learned a lot, including the fact that frogs have external eardrums and that you can tell a male from a female in that the male's eardrum is larger than his eye, whereas the female's is smaller.
Did you know that?
We went to the big library and we went to lunch at a Chinese buffet and Owen ate more than I have ever seen him eat. I have a feeling he's going to grow three inches this summer. At least. We went to Costco and bought a bag of apples so huge that Owen nearly fainted with joy.  Apples are one of his favorite foods.
And so that was all good and Maggie is making raspberry noises with her little pink tongue sticking out of her mouth and giggles and laughs and I got all her sugar today, nuzzling and kissing her.
What would I do without my babies, the ones grown and the ones still little?
Before I left Lily's house Owen informed me that he had seen his parents having "sex" the night before and he used finger quotation marks. Lily said, "What?! What did you see?" And he said "lots of kissing."
"That is not sex," Li.y said.
"But it was romance!" Said Owen
He was right about that.
I remember the first gay bar I ever went to. It was in Tallahasee and I was living with a woman named Paula and a man named Bruce, and Bruce took us to a place that was a fried chicken joint by day and a gay bar at night.
I loved that place. There was outrageous dancing and fancy flirting and a sense of community and safety I'd never felt before in my life.
I've been to gay bars since. Some with my son. Some with my husband because Club Park Avenue was the the very best place to go dance on a late Saturday night and no one cared whether you were whatever or whatever and why define things? Just fucking dance.
I am rembering these things, even as I do grandmother things. I want nothing more for my grandchildren than for them to grow up in a world where love is love and dancing is dancing and everyone is allowed to fall in lust or in love freely and with joy wherever they are.
That is what I want. For them to know that they are loved to the heavens and back and that they will be safe in all regards as they experience all of these things as all humans must and should do.
Is that so much to ask?
I have lived with the fear that a child of mine may be in danger simply because he is who he is for so many years.
And I think of all of those mamas and daddies whose fears were justified yesterday in such a horrific way and I am brought to my knees.
I contemplate the making of preserves and I feed my chickens fruit and I try to remember that love is stronger than hate and that for all of the years of my life I have been blessed with the absolute knowledge in my soul that there is no wrong way to love and it ain't my business anyway. 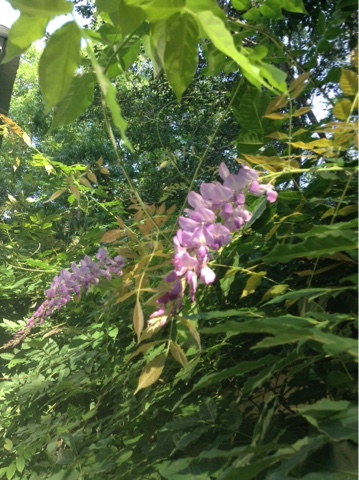 The wisteria is putting out its second summer growth.
That's what's on my mind tonight.
Love...Ms. Moon
Posted by Ms. Moon at 7:54 PM