Back To Using My Words

Did you notice that I didn't really write anything yesterday? I just didn't feel like it. Maybe for the first time ever.
And it was a busy day. It was actually, in my life, a remarkable day in that May and Michael came out for a visit while the boys were here AND my friend Judy stopped by. And the phone rang at least seven times which is about two weeks worth of calls for me. Not counting political robo calls. And one of the calls was from Hank who told me all about the new apartment he's about to move into and I am so thrilled that he's moving from his tiny little place into a bigger place with an oven that actually works and sinks actually attached to the walls. And TWO bedrooms! And a blue-tiled bathroom! Such good news there.

The boys had a fabulous time when they were here. They glommed onto May and made her play with them for about two hours. Tarzan, Power Rangers, Fly-Like-A-Bird.
I don't know what all.
I had some plants I wanted to give May and I did. One of them was the pup of my ancient split-leaf philodendron. The smaller plant was in a pot on the front porch that is slowly coming apart in shards. The pot, not the plant. It froze last winter and cracked and I have several of these sister philodendrons and so I dug it up yesterday, amazed at the number and length of the roots and was even more amazed at the number of earthworms in the pot's dirt. I mean, it was like a worm condo in there! I bagged up the plant and gave it to May along with one of my giant-leaf begonias. I have so many of those plants now that I started years ago from sprouting two leaves. I feel so rich in my plants and isn't that silly and when winter gets here and I have to bring them all in to prevent death by freezing I'm going to feel even sillier.

After May and Michael left and Judy was here, she and the boys went on a worm-digging adventure. They are always shy of her at first (they are a bit shy of anyone they don't really know) but Judy is so good at getting them to finally shed their shyness and they always end up in love with her. 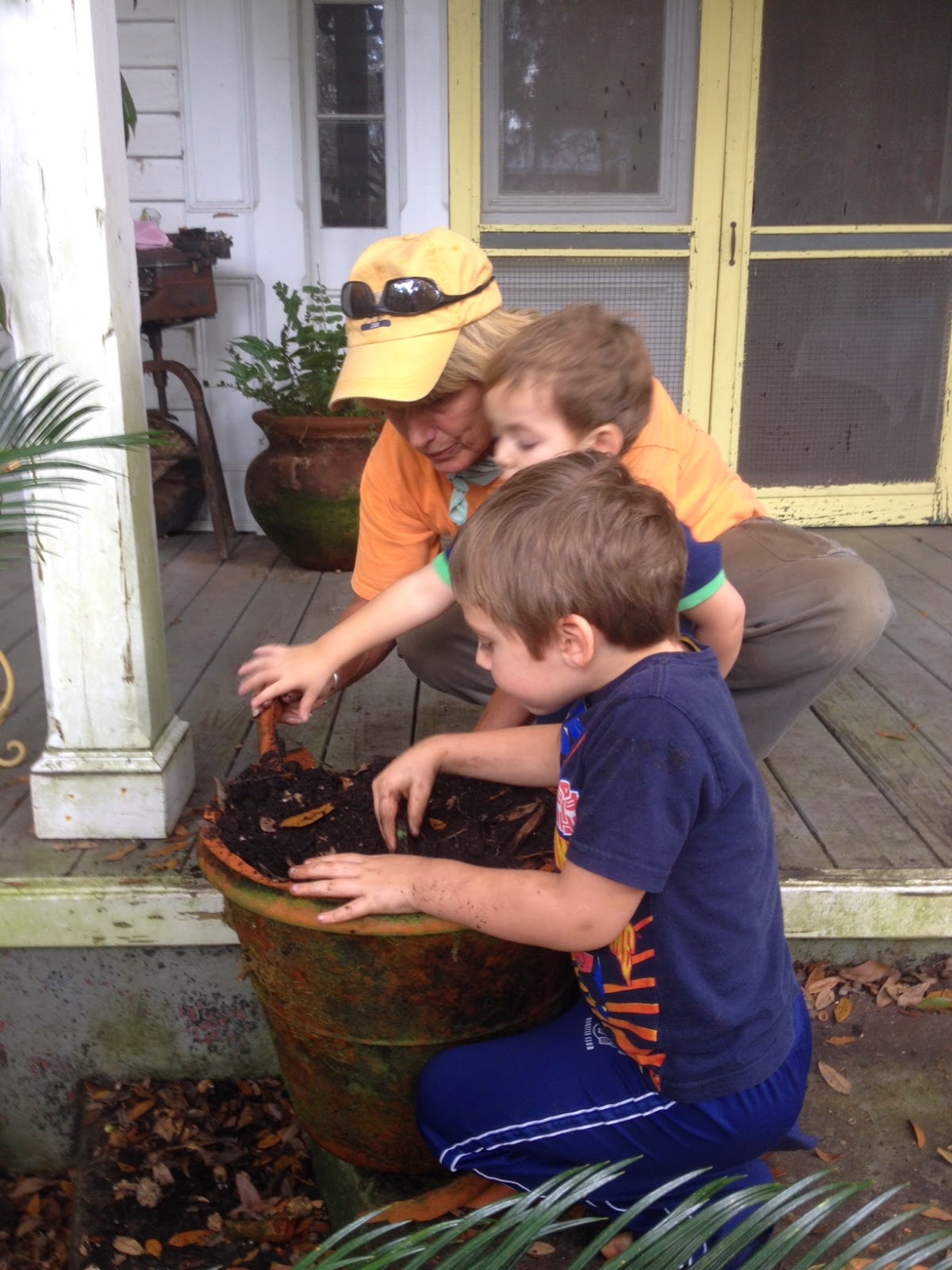 They transferred the worms they caught to other pots on the porch. It was quite a project and after Judy left, Boppy came home and played with them for a little while and when the boys were in their daddy's car, ready to leave, Owen said, "I wish we could all live here forever."

And I'm sure he does. With all of the people who love him.

When he was still sort of hiding from Judy, he came out to the porch and sat down with a notebook and a pen. I came out to check on him and said, "What are you doing, baby?"
"Figuring out who the murderer in this house is," he said.
"Okay," I said.

May came and checked on him a few minutes after that. She came back in the kitchen and said, "I'm a little worried about who this murderer is. The only name on that paper is Owen."

A tiny bit later, I came back out.
"Mer," he said, his voice all trembly and dramatic, "I figured out who the murderer is."
"Who?" I asked.
"Me!" he said with great and fearful dramatic flourish. 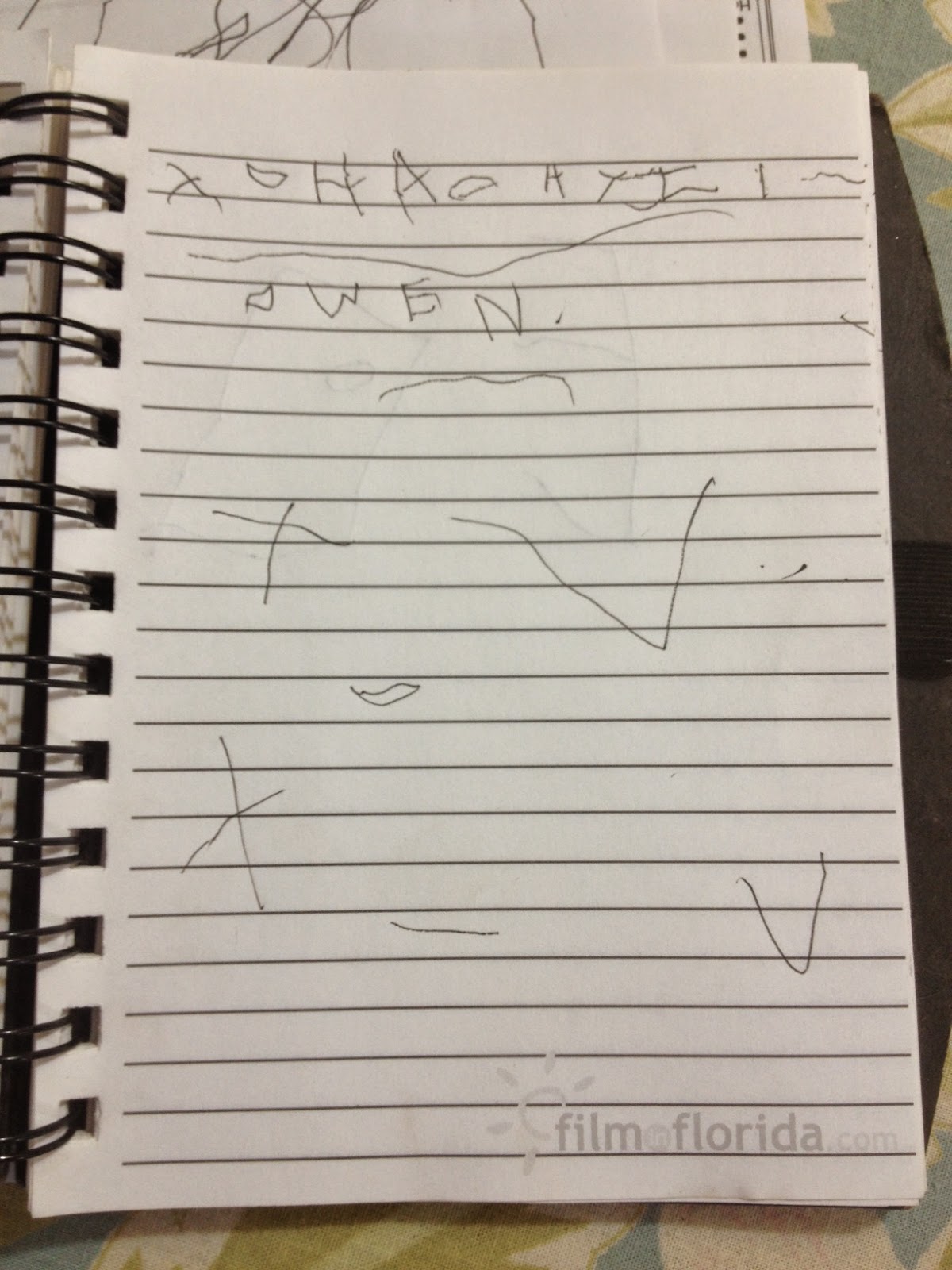 He had a cold yesterday and Gibson was a bit sniffly and now I've talked to Lily and she's got the cold. It's not a bad one, just an annoying one. She texted me a little while ago when I was on my walk and said, "If I ask you something will you answer me honestly?"
And of course my mind went to all sorts of crazy places. What in the world was she going to ask me?
I texted back, "I guess."
I got home and called her. What she wanted to ask me was if I was going to be coming to town for real because if I was, she'd like some seltzer water and cough drops but she did not want me to just come to town for that.
Oh Lord.
And I am going to town so it will be easy to get her those things and drop them off. Honestly and truly.

I just talked to the very delightful Norma Jean at my dentist's office. I'm going in tomorrow at one for my "procedure" which is getting the damn spike put in my gum which will, eventually, anchor my crown. For some reason I thought this would take about twenty minutes. Dope me up, drive that sucker in with a nice little surgically sterilized hammer. Done. Right?
Fuck!
They have me scheduled for "most of the afternoon!" They said that it'll take me about forty-five minutes to an hour to become properly sedated. Shitfire!
Well, if the extraction process was any indication, they definitely know how to sedate me properly. I still look back on that day with such fondness. The drug cocktail they gave me was better than the quaaludes we used to do back in the old days and that was some good shit.

I should shut up now, right?

Yes I should. I'm going to run to town and get things to make a big pot of vegetable soup and drop those things off for Lily and kiss my babies and then I'm going to spend this beautiful afternoon chopping and simmering and nothing in this world makes me much happier than that.
I am listening to Wally Lamb's "We Are Water" and enjoying it so very much.

Here I am. I have had a good walk, I feel good, tomorrow I'm finally going to get this implant process started, there will be drugs. Jessie and Vergil will be here in a few days, I got to see my May yesterday, and Michael and Judy too. Hank will have a new home soon.

Oh! And Mr. Moon shot a deer the other night! Fresh sausage! And if all goes well, fresh greens from my own garden in a month or so.

It doesn't take much to make me happy, does it?

Lucky as hell, rich as Midas, and wise enough to know it.