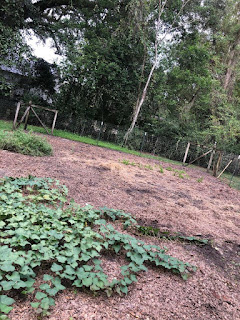 Damn, I'm tired. Today has been a long hard slog of it for me and I have been slapped in the face with the fact that the old gray Mary, she ain't what she used to be.

It all started out with a note from my husband saying that he was taking my jewelry and moving to Buenos Aires to be with his fabulous South American mistress.
No, no. Not really.
The note said that the freezer wasn't working and he'd call me after he got out of the gym.
I'd almost rather have heard about a mistress in Buenos Aires.
Again- and most definitely- not really.

So. Yes. Last night I had realized that the ice maker was not dispensing ice and that the freezer had taken on a spell of sweating. I told Mr. Moon and we did what humans do and rationalized all the symptoms to mean nothing, nothing at all! Just, this adjustment, that possibility.
You know.
But this morning when he went to make the smoothie and reached for the supposed frozen bananas in the freezer he discovered only a bag of mush and the ice maker still wasn't making ice.
So...
What's a woman to do but to haul everything in the freezer out to the freezer in the garage in her laundry basket?
So I did that and almost killed myself because I'm so damn lazy I decided to carry it all in one go rather than make two trips.

And then I got to work in the garden. There was just a bit of weeding to get done before the tilling can happen and then the planting can happen and I'm way overdue on the planting.
So. That little bit of weeding took about three hours and although it was overcast and only in the low eighties, I sweated like a beast and my knees took the brunt of it all but that garden is cleared except for the sweet potatoes, the basil, and two very short, straggly rows of arugula.
See above. Try not to get dizzy.
I was too weakened by my efforts to hold the phone straight.

Oh! While I was out there weeding away, I heard the huge CRACKING noise that I now realize immediately is the sound of a very, very large oak tree or a very, very large oak tree branch breaking. Then the thud, although not a great thud.
The chickens next door who live right near where I heard the crack and thud went crazy and cackled and called and made their panic noises and I walked over to see what was what and indeed, a very large branch on a very large and extremely old oak had fallen but wedged into a fork of the tree.
I went back to weeding and the chickens regained their composure.
I swear- it would not be surprising if I died due to a falling tree branch. It's got to be at least a possibility in this yard. It would not be the worst way to go if it happened instantly. I'd hear the thud, look up, and BOOM! Done.

Anyway. I finished up the weeding, crawled into the house and took a shower because I was filthy. The kind of filthy that is going to require more than one shower to truly deal with. And then, and THEN, I set up the ironing board and ironed three episodes of an old Ricky Gervais series on Netflix worth of shirts.
I was talking to Jessie about needing to do ironing the other day and she said, "You never used to iron shirts," and I said, "That phase of my life is over."
It just makes the man feel so loved and like I've said a hundred times before- it gives me an excuse to watch TV in the daytime.
It's not really that strenuous. And it does give me a temporary sense of accomplishment.

Then I realized that the freezer was working fine again. The ice was being made and dispensed and so forth. So I went out and got all of my freezer stuff from the garage and brought it back in although this time I took two trips. I simply could not have carried it all in one load. I hope this was not a premature act.

The bed is going to feel very, very good tonight.

I feel the need to do a bit of bragging here. The bread I made yesterday turned out beautifully. Look at the way the Lloyd yeast rises the bread: 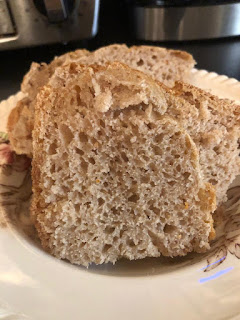 Isn't that pretty?
We were watching the Great British Bake Off last night as we ate our soup and bread and it was bread week, coincidentally. For the very first time while watching this show I felt as if Paul Hollywood might have said, "Good job!" on something I've baked.
Or, he might have said, "Bit chewy, isn't it?" and then looked directly into my eyes with those preternaturally piercing blue eyes of his (who doesn't have a bit of the hots for Paul Hollywood?) and I would have said, "Bite my ass, Paul Hollywood! I captured my own yeast to bake this bread. Use your damn teeth for what god gave them to you for."
And I would have won Star Baker.

I just turned on the air conditioner. It's 78 degrees in my house. Tomorrow night, it's going to get down in the forties and I will probably turn on the heat because to us, that's like Frozen Tundra temps.

This is just one of the many reasons we're so crazy here in Florida.