One Of The Best Anniversaries Ever 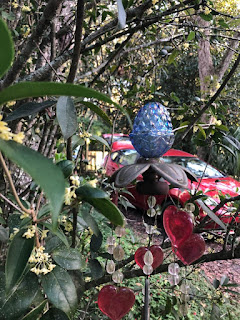 That's a rather jumbled-up picture but the message is that the tea olive is blooming and the scent of that is what we were greeted with when we got home.
And that was a very nice thing.

So yes. We made it. It was hard to leave this morning. We got everything packed up and tidied up and I tried to leave the little Cabana House in as good a condition as possible. I walked around and gave the river my love and the bamboo and the palms and the mangos and I patted one of the lions' heads and told him that he was still doing a good job and I teared up and choked up. We drove to the breakfast restaurant we love and after we ate we hit the road and drove the interstates, mostly, just to get on home. We passed a horrible wreck. A car had driven off the interstate, down the embankment and into a tree. The car was wrapped and twisted and blackened. A fire truck was spraying the area down and an ambulance headed East with all sirens and lights so I guess that somehow, some way, someone survived.
I don't know how.
We were both silent for a few minutes, thinking about how quickly life can change, can end, can go so very dreadfully wrong.

But now we are here in Lloyd, and Hank and Rachel left the house in such good shape and that darling Rachel left enough food AND beer in the refrigerator that we could have a dang party now. I've got laundry going and have unpacked the kitchen stuff but haven't touched my clothes or jewelry or make-up or toiletries and I vow and declare never to pack so much again.
I didn't wear any of the jewelry I packed, mostly because I couldn't find my silver-polishing rag until I packed up to come home so I wore the same jewelry I left home in. A necklace and a pair of earrings.
I didn't wear a third of the clothes I took.
I used a little bit of make-up twice.
I didn't read all my New Yorkers although I did read an entire David Sedaris book (which takes about two hours, maybe) and started a book of short stories only to realize I'd already read them.
I took a pair of shoes that I never wore.
I took jackets that it never got cool enough to wear.
I forgot my hairbrush and had to buy a new one.
Let's face it- I suck at packing.

Whatever. I got everything there and back and all is well.

And it was a very good trip, honestly, in a lot of ways.
Despite anxiety and the uncertainty of the whole Mayo situation and my general state of stressed-outed-ness when we travel, we managed to have some very sweet time together, that man and me. Sixty-five year old people can be pretty loving.
Who knew?
And we laughed a lot. And god knows we ate a lot of crabs.

I did have a terrible nightmare last night. It was unlike anything I've dreamed in a very long time and it was so terrifying that I yelled out loud, waking myself and my husband up. It was so real that it makes me wonder how much about my childhood I may have blocked.
Ah well.

Like I said, it was hard to leave Roseland. It is remains absolutely unbelievable to me that it's still right there. And yet it is.
What a lovely glory that is to my heart. That place, that river, that sky and those trees and houses and the people who lived in them helped shape me into who I am when I was a child and they continue to mean so much to me now. When I think back on who I was then I imagine a little chubby grown-up woman with wary eyes behind blue cat's eye glasses, already worried about everything in the whole damn world. Or her world, which was the same thing at that age. And yes, many really awful things happened to me in Roseland but the fact is that there was so much to sustain and comfort me in the natural world that I not only survived but ended up feeling almost nothing but sheer love for the place. Roseland was never cruel to me. She only offered the sweetest fruits of life when I needed them most.

I better get back to unpacking and laundry and so forth.
Life flows on, doesn't it? Within you and without you.