We Go To Monticello 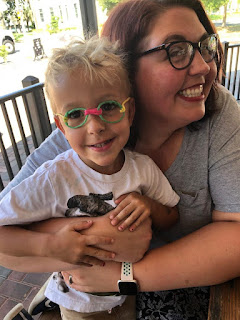 Lily and Jessie and I decided to go to Monticello today and thank god. I woke up late, disoriented and already frustrated and angry from my dreams. I needed desperately to get out of the house and into a world with grandchildren.
I got a few chores done and put on a dress and Jessie and her boys picked me up and we drove to Monticello. Jessie said that August had been talking about Terez, the librarian there for weeks and we hoped he would be there. And he was. August, despite his interest in Terez, had already made a plan that he would go directly to the kids' computers but we convinced him to stop at the desk and say hello to Mr. Terez and he did and then he flew to the computers. Jessie and Levon followed and Levon was shy and hid behind his mother's legs but came out soon enough to also sit at a computer. Terez seemed very happy to see us. He is just the nicest guy. Six foot five he is and merry as can be. One of his old elementary school teachers was there and he told us that when he was little all of the kids had loved her because she had a pair of sunglasses that when she flipped them up on to her head, became Micky Mouse ears. "She says she still has them!" he said.
Oh, the power of the fun teacher.
When Lily and Maggie got there, Maggie also became shy. She was wearing a magnificent princess dress with a headpiece that someone had passed down to her with the sparkly shoes I got her when we went school shopping for the boys. She, too, hid behind her mama's legs but Terez went and found her a sequined slap bracelet from the toy box to give to her and she melted and said, "Thank-you," very sweetly.
There was computer time for the kids. August especially loved the games. He doesn't have games like that at home so he was fascinated and all in. He got onto a game where he had to put the internal organs into a human form and bewilderingly, he knew where so many of them went and even knew a lot of their names. Maggie wandered into the book room and stepped behind the little puppet theater prop but instead of a theater, it was her store. 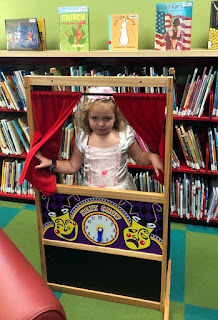 She sold books. Levon and I bought them. Levon found truck books on his own and we looked at those. He even took one to the desk and handed it to the lady behind it. "He loves trucks," explained August.
This is most definitely true.
Maggie wanted me to read her some books and of course I did. She crawled up on my lap and cuddled me and we read a few. There was a scavenger hunt where Terez gave us a sheet of paper with Halloween things printed on it that were all hidden in the two kid rooms and if they were all found, a reward in the form of a piece of candy was given. All of the ghosts and spiders and witches were found and candy handed out and the children were in heaven. Terez offered candy to mamas and grandma, too. We spent some time talking to him today. He is twenty-eight years old and he goes on annual trips with his mother's church group. Or possibly grandmother's- I can't remember. But they went to NYC this year and they've been to Washington, DC and Chicago and all sorts of places. I love the thought of Terez on a tour with a bunch of older ladies. I bet they love him to pieces. He is so kind.

We pretty much took over the kids' section of the library and had to do quite a bit of tidying before we left. Everyone told Mr. Terez "Good-bye! Good-bye!" and he said, "Come back soon!" and we said, "Oh, we will."
The joy of a small town.

And then we drove around the courthouse and parked and walked to the Rev, where we like to have our lunch. Not only is the food very good but if we eat on the porch the children can play with the large blocks and perhaps more importantly, Levon can see all of the trucks and tractors and heavy equipment that make their way down the road that circles the courthouse. Which is a LOT. 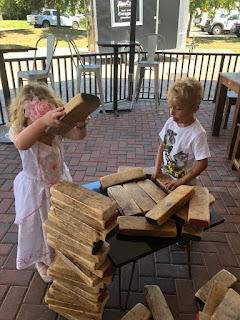 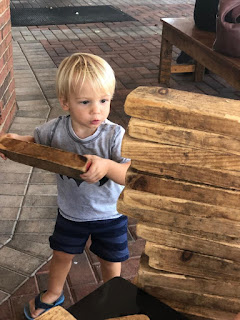 We love how the kids just immediately jump into building and they seem to be very good at teamwork, working together to make tall stacks or long roadways.
At one point, we spied three huge trucks hauling flatbeds with absolutely massive dirt and whatever-moving vehicles on them and Levon almost lost his mind. He pointed both of his arms straight out, his pointer fingers extended and squealed with joy. It was not unlike a true-believer witnessing the second-coming of Christ.
He was en-Raptured.
Wiki Stix were played with. 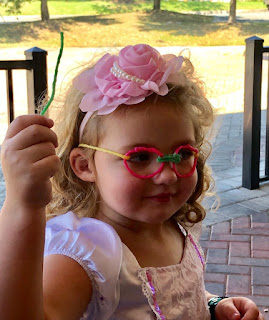 Jessie is taking part in a study with the AIP diet which you can read about here. I am not certain that the link truly explains what the diet is but it gives the basics. It's a diet to try and heal the gut and improve the microbiome to reduce inflammation in auto-immune diseases which she does suffer from. It sounds like a really serious study and there are several stages to it, explicit instructions, blood work, and so on. This is the week that the participants are getting their pantries and mindsets together to truly being prepared so Jessie is eating all of the grains and goodies that she will soon be eliminating from her diet now. The portion of the diet which is most restrictive will last for six weeks and then foods will be introduced back very, very slowly and responses recorded. So it's not a forever thing.
I truly admire and respect her for doing this. She's been trying on her own for some time to do essentially the same thing but this will be a much more controlled and supported effort. It's not easy. No alcohol, coffee, grains, sugar, commercially processed seeds, dairy, nightshade vegetables, and so forth. Even the spices she uses will be defined and restricted. But how worth it it will all be if her pain and skin problems abate! She suffers and has suffered her entire life.
Vergil is very supportive of this effort and of course her entire family is. So today, as we ate we talked about it all. If I were a great mama, I would do it with her (some of the subjects' mothers are!) but I'm just not that dedicated. It will be very difficult for her to eat in restaurants because even if what she orders is within the protocol, there is no guarantee that what she gets will actually be free of what she needs to avoid.
But she can do this and we can help her.
I'm proud of that girl.

After lunch Jessie brought me home and I didn't have the energy to do a damn thing but sit on the couch, watch some TV and do a little stitching and then I took a nap. On these days when my mind goes to places that are murky and deep and dark, my body follows with its own pains and fatigue. The mind/body connection is no stranger to me.
Yes. I should probably do that diet.
To be frank, I am not strong enough.
My entire life has been spent denying myself foods that I love and flirting with eating disorders and not eating when I'm hungry and following programs- even healthy ones!- that I can no longer seem to gin up any interest in doing anymore. I used to do it to be thin and beautiful.
I am not thin. I am not beautiful. Not anymore.
But I can eat cheese.

And so I'm going to go make some shrimp and grits.

That's it from Lloyd today. 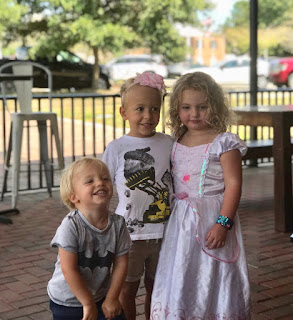 Maggie had taken off her beautiful flowered and pearled headpiece and August gladly put it on. Can you see the beautiful bracelet that Terez gave to her? Aren't they beautiful children?
I think so.
I am so grateful for them in my life.
As always.