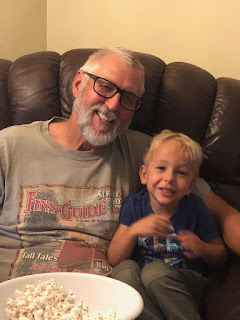 I have wanted to do so much more to help Jessie this week before we leave and it struck me that tonight is the night that August needed to come stay. That way we'll still have tomorrow to get ready to leave on Monday. And of course, August thought this was a great idea and his mama did too.
The storm never did much of anything at all. It rained on and off and just as Mr. Nucatola said, it was breezy. I managed to walk to the post office and clean out the hen house.
Boppy went and got the boy and then Jessie and I both got this picture. 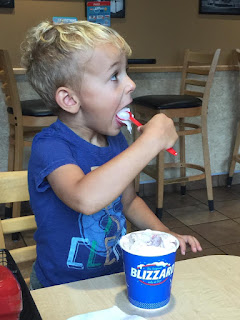 Good Lord! How can a Mermer compete with the Dairy Queen?
Not with embroidered overalls, I'll tell you that.
And then of course when they got home there was TV although Mr. Moon mostly napped through that. It's a napping sort of day.

I had made up another loaf of bread just because I wanted to feed my starter and I'd rather use some of it to bake with than to discard. I didn't use a recipe because I didn't want to make the regular sized loaf and I didn't feel like using a recipe so I sort of just went by the seat of my pants and my god, after it rose, that dough was the silkiest stuff I ever felt in my life. It felt like living silk. That is literally the only way I can describe it. I kneaded a bit more flour into it and let it rise again and it still wasn't really substantial enough but I've plopped it into the heated cast iron pot and covered it up and it's in the oven and it is lovely-looking.
I'll take a picture when I take the lid off to let it brown. I'm loving this cast iron pot baking. It just charms the hell out of me.

This post is wandering like Moses in the desert. Did you know that it took Moses forty years to lead his people to the promised land, a journey of about 250 miles?
This cracks me up so much.

Anyway, yeah, so besides TV there's also been marble-playing and puzzle-doing and bed-setting-up. Oh, and popcorn-eating WHILE watching TV. As you can see above.

The drastic difference in yesterday's temperature and humidity and today's has led to every surface in my house being wet, every mirror fogged, and everything feeling soggy and wilted.
Including me.
Mr. Moon just did a little work outside, came in and turned the air conditioning back on.
He is not a man to suffer gladly if there is an alternative. Unless it involves, you know- hunting.

And I guess that's about it. Here's what the bread looks like so far. 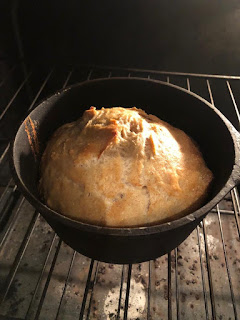 We'll be eating it with our spaghetti and salad.

I better go get busy in that kitchen. Little boys need to go to bed at a reasonable hour.