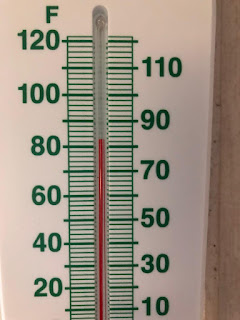 That's the temperature on my back porch right now and you cannot believe how pleasant it feels. The difference between 83 degrees and 93 degrees is vast. Although the temperatures are still way higher than normal, there is a tangible feeling of fall. It's the way the light falls, the way the air sounds as it breezes through the dried and drying pecan leaves. Some would say that's crazy talk but it's true. I'm sure that the smells are different too but it's harder to define those although I think that heat has its own smell.
Mr. Moon went to a hemp-growing information thing before he left and as swag he picked up a rain gauge (which it would appear we're never going to need again), a bag of crushed crab shell fertilizer, and that thermometer. The fertilizer is by far the most valuable thing he got but I love that thermometer. It's exactly what I wanted, although if it were metal instead of plastic I'd like it even better. But plastic or not, it pleases me. 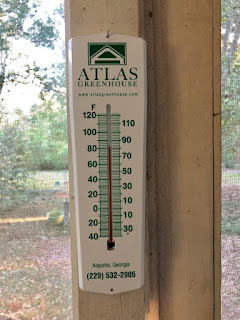 I've hung it at exactly my eye-level and I check it several times a day.
Old technology but good technology.
Of course Mr. Moon will have to bend over to read it. Sometimes I think of how very different our perspectives on everything are. He is almost a foot and a half taller and he sees things that I never do-such as the top of the refrigerator which I can go for years in blissful ignorance about its state of dustiness. Or shall we say...filth?
He sees the tops of almost everyone's head. Think about that! Can you imagine? Maybe some of you can but I'm almost exactly the average height for an American woman and I generally only see the tops of the heads of children. He sees spider webs that I never do. And once, when we were just getting together, I stood on a chair to reach for something and as such, was about the same height as he was and I realized that it is actually and indeed a lot warmer a foot and a half higher than at my height. Especially in winter with the heat on. No wonder we feel the ambient temperature in the house so differently although menopause helped even us out there.
We quite literally live in two different worlds even as we live in the same world.
And I have long had the opinion that if he sees dirt where I do not and if it bothers him, he should clean it up.
Mostly it must not bother him.

So I woke up this morning and everything hurt and felt so blah. Still, I joined Jessie and the boys at the library for babytime story hour and that always cheers me. I do love all of the little ones, the "big" kids like August, the toddlers, the real true babies in arms. There was a baby there today who was probably about six months old who had a full head of reddish hair and whom Jessie and I decided looked exactly like a baby should look. She was pudgy and darling and obviously the apple of her skinny red-headed mama's eye. August sat on his own feet in the most uncomfortable-looking position (I think he's double-jointed) the entire time, as close to the lady who led the songs and read the books as he could get. He was the only one who never did get up and wander around. He paid close attention to the stories and participated in all of the songs. Levon sat in his mama's lap and I pretended he was an apple and took bites out of him. He liked that and after I'd take a bite out of one foot, he'd move the other one to where I could chomp on it.
There is nothing in this world I love more than making a baby or a child laugh. That may be my purpose in life.
After the stories and songs and the stickers were given out Jessie picked out books for the kids and I read to August. He sat in my lap and we read a Curious George book about Hanukkah which he loved. We read another one about two scaredy-cat kids named Sam and Kerry. And then he picked out this one. 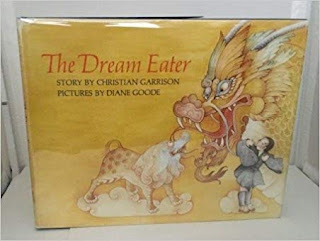 And in my prejudiced mind I thought, "Ooh boy. Another book of Japanese folk tales" because honestly, some of those books can be a bit dense and too sophisticated for a small child but I was so glad he chose it. It was a beautiful book and August loved it as much as I did. In it, a little boy has a terrible dream about a demon with three heads riding a dragon that was so scary that the boy could not sleep and he kept going to different adults to tell them about his dream and to get some comfort but they were all so obsessed with their own bad dreams and lack of sleep that they all told him to go away. Finally he went to the river because the river would listen to him and there he found a Baku, a creature who loves to eat bad dreams and the Baku followed him home and ate everyone's nightmares and the entire village could finally have sweet dreams and sleep in peace, including the little boy.
This engendered a lot of conversation and later, at lunch when we were discussing it, August told me that when he was in North Carolina he'd had such a bad dream that he'd cried. I asked him what it was about and he said that his legs had been cut off! I told him that that was SO scary and that I'd had a dream where all of my teeth fell out and he agreed that this was scary too.
"When I woke up," I said, "I was so glad that it had just been a dream!"
"Did you look in the mirror to make sure?" he asked.
Oh, that boy.
We also talked about why the Baku found nightmares so delicious and I said that maybe it was like sour pickles- some people LOVE sour pickles but some people do not like them at all.
"I don't like them," he said.
"I do!" I said. "And if you had a sour pickle and you didn't like it, I could be like the Baku and eat it for you!"
He contemplated this and I think he understood.
How I love being privy to a child's heart and thoughts. And being a grandparent means that you can do this without having to focus on anything else. At least for a little while. It is such a gift.

And so I had all of that to carry home with me and still, I've felt sad today. Perhaps because it is John Lennon's birthday. He would have been seventy-nine years old which is absolutely unbelievable. I wonder what the world would be like had he not been taken from us at such a young age. Would it be different? Would we be in this situation where we have a president who, when threatened with impeachment replies that no, no. He won't be participating in that particular event.
As if subpoenas were invitations to garden parties.
A president who can't speak or spell English. A president who has been accused by countless women of sexual harassment.
A president who is a racist.
A president who tweets about his "great and unmatched wisdom".
And part of a country and a political party who think he's just the finest thing since toilet paper was invented?

I don't know. I just know that I miss John Lennon and his truth.
We all tend to think of John now as the soft-singing writer and performer of "Imagine" which is a beautiful song and one which, it turns out, Yoko had as much to do with as John did.
But there was the other John. This John.