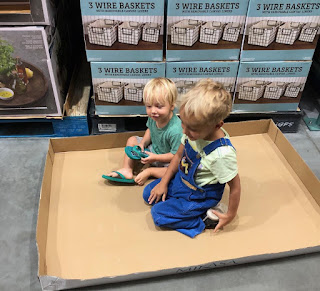 I woke up this morning groggy and dream fogged. I've been sleeping too much lately. I do not know if I am
A. Dying, or
B. Depressed, or
C. Anxious, or
D. All of the above.

And please don't suggest I go see the doctor. There is no visible blood anywhere so there is obviously no need.

But I got some things done around here this morning. Booked us a place to stay near Mayo in Jacksonville. It's only a few blocks from the beach and maybe we'll spend some time by the ocean. It's a very nice option to have. After lunch I met Jessie at Costco. It had been picture day at August's school and he chose his overalls to wear. His teacher told Jessie, "He loves his overalls."
That makes me feel so good. I asked him what he likes about the overalls. He pointed to the beaded dinosaur and wrecking ball.
"These," he said.
Bless his heart.
Levon was happy to see me. He's comfortable with me now. And Boppy and Aunt Lily. He's still very shy around people he doesn't know well. He doesn't throw his affection around willy nilly as some children do. You have to gain that little boy's trust.
We had a good time at Costco as we always do. The boys wanted to look at all of the Christmas decorations and August wanted to buy them all. His mother pointed out that he only has about three dollars and so he asked the price of every reindeer and Christmas tree and Santa. Sadly, there was nothing in his price range.
Pumpkin pie was being sampled and both boys liked that. Next up was beets. Plain, cooked, organic beets. August liked his okay and Levon seemed to like his but about ten minutes later I noticed that he still had the beet in his mouth.
"Levon, do you want to spit that out?" I asked him. I held out a napkin for him.
He spit out the entire beet onto the napkin, drooling a little drop of beet juice. He reminded me of a baby vampire.
"Did you like it?" I asked.
"Yes," he said.
Hmmm....
I love the way he studies everything so carefully and closely. I took him into the bathroom stall with me while Jessie took August into the stall next to us and I could tell that Levon was not quite sure what he was doing there. When I pointed out August's feet under the partition though, he laughed and laughed. What a great trick! And Mama's feet too!
Although he is a serious guy, he loves to laugh and does quite frequently. Especially with his Auga unless they are tussling. Those boys really do remind me of puppies. They love each other and love to be close but when they get to wrestling over something, there can be, if not blood, then at least a need to separate them. Jessie has a full time job and that's for sure.

Our friend who's going to housesit came over this evening to get the lowdown on how we do things and where things are. She house and chicken sat for Jessie and Vergil this summer and she's going to be fine. I've known her since she was a child and she and Lily were good friends. She's all grown up now, has a boy of her own. Hank and Rachel are going to come and stay at the end of the week before we get home. They love Lloyd. I know the house will be in good hands, the cats and chickens too.

It's been raining on and off since last night. We got a mighty fine real pour-down earlier this afternoon. The kind that you'd have to pull over and wait out if you were driving. Luckily, I got home from town right before that happened. As much as I've yearned for the rain, it's not really bringing me a lot of joy. I don't think that there's any sort of weather that would have much of an effect on my mood right now. I'm not in a deep dark place nor am I in a panic place but I can tell I'm doing a lot of dissociation and that's certainly a signal that not all is well. I try to remember to breathe and to focus on what's happening right in front of me. It makes me a much less fun grandmother. I know that. And not much fun as a wife or mother either.
Things will change. They always do.
And just being around the children forces me to be as present as I can be. I am quite aware that one of the reasons I've survived all of these years is because I've had children and now grandchildren. One can't call it in when lives depend on you. One cannot simply crawl into a hole and wait it out. And children are so nonjudgemental about things like how you look or whether you are being merry or not. They take you as you are, as long as you are loving and they trust you. In some ways the children in our lives know us better than anyone. Perhaps not in conscious ways, but in the deepest, most profound ways. Mermer may not be as silly on some days as she is on others but because the children know I love them without reservation and because they know what I have in my heart and in my purse too, (gum and Chapstick), it's okay.
They know I love them and they know I love their mothers and those facts alone offer a safe place to be.
And sometimes, that is all I need to get me out of bed, to get me on my feet, to make me remember that no matter how low my own opinion of myself is, there truly is a purpose in my life. Every bit of love that I can offer my grandchildren is going to someday be of benefit in their lives.
I don't know much but I do know that.

Now. If I can just stay awake for three more hours, all will be well.