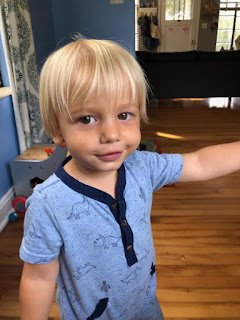 I went into town earlier than usual this morning to stay with this little boy while his brother was in school and his mama had a chiropractic appointment. When it was time for Jessie to leave on her pink bicycle (the one her mother-in-law used to ride across the entire country!) he kissed her and said, "Bye Mama!" and then we played and read books and were silly for an hour and a half or so. He didn't make one tiny fuss and never asked for Mama. He did say "no" when I asked him if it was time to change his diaper but he didn't complain when I did it anyway.
We had some giggles and I got so sleepy when we were lying on August's bed in his soft blankets reading books that I had a fantasy of him falling asleep in my arms so that I, too, could doze.
But no. Of course not.
I did note today that after telling Levon something- I can't remember what- he asked me, "Why?"
And I thought, Well, here we go.
When Jessie got home and he'd had a little mama milk and was satisfied that she was truly home, he asked me to hold him when he was in her arms. I could not have been more pleased if the queen had asked me for tea.

I went to the library after I left Jessie's house and found some new books to take on my trip with me and then I met Mr. Moon at the hematologist's office. His GP had set up an appointment and it was concerning the blood clot he'd had a few weeks ago. It wasn't much of a blood clot and was in a small, superficial vein, but it was the second one he'd had in several years. I liked this doctor fine. He was a good listener. He asked pertinent questions but when things went a little off the rails into areas that he probably didn't need to know about, he was patient and didn't interrupt. When he said that the pharmaceutical industry ripped off people, my opinion of him only got higher. Anyway, there were no problems or surprises and a plan of treatment and a follow-up was scheduled.
I suppose this was a warm-up for next week's round of appointments.

I went to Publix, I came home, I got some laundry done, I drank some coffee. I am still so very tired.

It has been lovely cool all day long and I think we are going to be getting some rain quite soon.
A lot of rain. 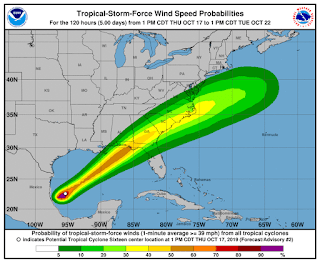 And, according to the National Hurricane Center, some damn strong winds.
Really? REALLY?!
It's always the storm you didn't seem coming, isn't it? This will be coming tomorrow night and will probably be long gone from our area by Sunday. At least I hope. I also hope that this cooler air we have right now will damp it all down although they are saying that the Gulf waters are still very warm and that's a huge factor in development of these storms.

I've been thinking about Elijah Cummings all day long.
One of the truly good ones. I had not known he had been having health problems but that speaks even more to his determination to do right by this country. I also did not know that he was the son of sharecroppers but what I did know was that every time I heard him speak I was blown away by his straight and unabashed ability to cut to the bone of the situation, to speak the truth and fear no man. And, and, and...
I'm just going to say it- why did he die and yet Trump is still alive?

Well, I don't have the answer to that and neither do you.
Unless you just plain accept that life is what it is and there is no justice and that disease and death come to us all but at different times in our lives.

This hasn't been a very entertaining or enlightening post but it's what I have. Things will probably pick up here along with the wind. I hope not TOO much, though. Honestly, branches have been crashing and falling just during the rainstorms we've had lately and I really don't want to face the prospect of leaving on Monday with a yard covered in downed branches, limbs, twigs and leaves. But if we get the winds they're saying we might, it's going to be unavoidable.

I just looked out to the hen house and saw some of my chickens doing their usual thing and roosting on top of it. Lord, if we get fifty mph winds tomorrow night, those birds won't be in Lloyd the next day. They'll be up in Georgia somewhere.

And that, my friends, is something I just cannot control.
Which is like about 90% of the rest of my life.