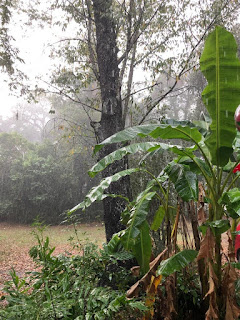 A little while ago the wind began to dance the leaves and small branches into a rackety frenzy and the chickens, startled, ran for cover under the kitchen porch. And then, suddenly, it was raining and I rushed to get the clothes off the line while the air filled with that sweet green smell of earth-funk and ozone and for a few good minutes the rain came down hard and even though I knew it wasn't going to last it was like a reminder of a promise that we'll not dry up entirely quite yet.

As Jessie wrote in a text, "Praise the Earth!"

Another slow, very unproductive day for me. I hate days like this. I suppose I need to go out and find something to do that would actually help someone instead of just waiting until my kids want to do something or need me to babysit because as it is, I'm not really being of much use to anyone, myself included.
I finished watching all of Derek today and if there was one message to the whole show it was to be kind and help others.
I had to laugh. The female lead of the show, the woman whom I said was like a saint, stated in a last episode that she really didn't have much of a maternal instinct. Last night as I was drifting in space before sleep I thought about how she represents the Perfect Mother, all-loving, all-caring, all-self-sacrificing, putting everyone else's needs before her own. That thought sort of pissed me off because it is such a horrible burden on all mothers to think that that is how we should be if we are to be the best mothers our children can have. And it's impossible to be that mother no matter how much we may want to or think we should be. Hannah, the character on the show does indeed have her moments when she yells or reaches her limit but overall, she is as saintly as any woman on earth could possible be. She is the Ultimate Mother Figure.

Anyway, I am no Hannah and I know that when I was a younger woman, a young mother, I was often filled with guilt for not being that woman while at the same time, filled with resentment for society putting that message out there in the first place and yes, even to my family for not realizing that doing the things for them that I did was not always my natural inclination and sometimes (often!) it was really, really hard.
And it is- it's almost an impossible job if you think you have to always conform to certain standards. Hell, it's an almost impossible job if your goals are basically to keep your children alive and your house tidy enough for the health department not to be called in. Throw in keeping them relatively healthy through nutrition and and regular doctor and dental appointments and bedtimes, and giving them physical and mental and creative outlets and challenges, and making sure that their emotional health is at least stable and making sure that they know they are loved and cherished and supported and respected as human beings who are learning to practice their own autonomy and add to all of that that each child is different and requires completely different things at different times AND trying to keep a partner happy and knowing he/she is loved and well...it is impossible.
It's fucking impossible.
And show me a mother who doesn't go to bed every night beating herself up for one tiny thing (or okay, maybe three big things, whatever) she did wrong in the course of her day with her children while doing probably five hundred things right that she doesn't even consider and I'll show you a mother who doesn't exist.
Or, you know- has nannies. Or is a flaming narcissist. Or is a flaming narcissist with nannies.
Phew.
I have to say that I'm surprised my kids survived the upbringing I gave them and I'm probably even more surprised that I survived.
Thank the heavens for the love you feel for them and that they feel for you because without that, no one would be crazy enough to bear and raise children.
That tricky Mother Nature.

So what in hell was I talking about?
Oh yeah- I need to do something that helps others.
Frankly, I think I'm a selfish bitch. Selfish with my time, with my energy, with my ability to sleep as late as I want to. I am just not a do-gooder at heart. And also, I like to have lots of alone time. Which probably isn't good for me but I yearned for it all my life and now I have it it's hard to think about becoming a part of some volunteer program where I would have to interact with other people and  possibly (oh dear god) attend meetings and things like that.
I'm sure there are actually a lot of things I could do that wouldn't require much of any of that.

Oh well. I'm not going to figure it out tonight. In the meanwhile, I can be kind and I do try to be kind although like Hannah, sometimes I reach the end of my rope and that's okay too. I am human.

Mr. Moon got a call from Mayo and has an appointment set up for October 21. This is good. And they are probably going to want him to stay for a day or two for testing. The clinic is in Jacksonville and our trip to Roseland, which is right down the coast from Jacksonville, is supposed to start on October 23 so that is good timing. We can leave on the 21st and then head on down to the beautiful little pool house on the Sebastian River.

Two photos from my walk this morning. 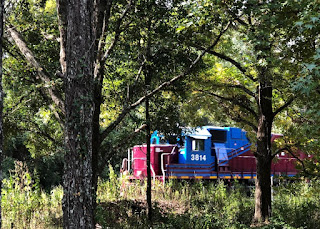 A train came through right as I left the post office (which long, long ago was a railroad depot) and I got this shot of the engine. 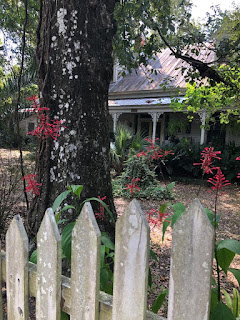 My beautiful old house with the fire spike blooming in front of the fence which yes, needs pressure washing and painting and so does the house. The fire spike doesn't care and neither do the hummingbirds or bees. Now what my neighbors may think is a different matter...