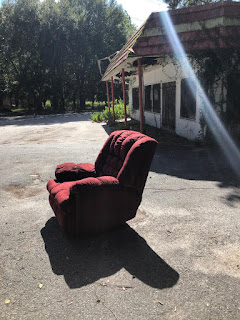 This is the sight right now that greets visitors or travelers-through when they get to the flashing light in Lloyd. The old store is crumbling and the windows have been broken and the roof is falling in. That store was open back in the 1970's when I lived in Lloyd before on a piece of land farther north right off the same road I live on now. Even then the store had an air of dissolution about it and I don't think I ever went through the doors. We did our local shopping at Ms. Ruby's which was across the street. Ms. Ruby's was in a beautiful old wooden building with a front porch and a tin roof and she sold a bit of everything from your standard beer and milk to hardware and cheap toys. She told me that she sold the toys because there were kids in Lloyd whose parents couldn't get to Tallahassee or Monticello and they needed something for birthdays and Christmas. She sold some produce, sausage, bread, grits. Things like that. Staples. Ms. Ruby was a nice woman and I liked talking to her. She had a sign on her beer cooler that said, "If you break a six-pack I'll break your arm."
She may have been nice but she didn't tolerate bullshit.
Her store burned down sometime after I left Lloyd and there was some sort of political motivation going on. It was a weird time in Lloyd and there was a highly debated issue concerning pipelines of some sort and whether or not they should go through Lloyd. How this involved Ms. Ruby I do not know but I do know that the main enemy of the pipeline people was a guy who lived in the house I live in now. He eventually got the move defeated.
But Ms. Ruby's store is no more and never will be again. She died not long after I moved back but not before I got to talk to her some. She told me that she'd lived in this house herself when she was a child and her mama had a quilting frame in the hallway and that she'd seen "something" supernatural happen that she would not describe no matter how much I gently pushed her.
She just didn't want to talk about it.
I've never seen or heard anything weird happen here except for a few things that very much alive humans have caused. Thank goodness.
Anyway, when I moved back to Lloyd fifteen years ago, an extremely nice gentleman named Israel Lawrence owned and ran that store in the picture above. He kept it tidy and neat and he and his wife were two of the most gracious people I've ever met. He had a picture of himself and Bill Clinton behind the counter. He was wearing a blue Polyester suit and Bill was holding a saxophone. He also had a shotgun behind the counter, or so I've heard (well, I heard it from him) because Lloyd had its wild-west days when the whole crack epidemic was happening.
Mr. Lawrence got sick though, and had to give the store up. It was so sad. Eventually it was sold to a couple from Tallahassee, according to the word on the street, who planned to make it into a shop where the wife could sell her arts and crafts.
Maybe the crack epidemic never truly ended.
However, that happened over a year ago and not one damn thing has been done and the building is falling into decay and is fast becoming not only an eyesore but a danger and as of yesterday, when I first saw that chair, obviously a place to dump your shit.
Great.

Hmmm...
Didn't mean to go into a History-of-Lloyd post but I guess I just did.
I took the picture of the chair this morning on my walk. I had thought I'd maybe just spend the whole day here again but then I thought that it would be sort of fun and crazy and daring to go get a pedicure and I needed a few things from Publix. There's a nail salon right next to Publix where I shop and where Lily works and although it's not the best, it's certainly convenient and extremely reasonable.
Well. It seemed like a good idea at the time.
I took a shower after my walk and even shaved my legs! and scrubbed my feet the best I could without the use of bleach and got dressed and drove to the little strip mall where Publix and the nail salon are and went in and was immediately assigned to a guy for my pedicure. He was older. Probably not older than me but certainly older than the usual nail salon employee and I had a feeling from the beginning that this might not go well. It's so hard for me to rationalize getting a pedicure in the first place due to First World Beige Woman Guilt (just being honest) and I usually never get one unless it's when my daughters can all get together and go, making it a party. But you know- Mr. Moon's out of town, I'm on my own, it's sort of like I'm on a vacation...blah, blah, blah.
So.
First thing that happened is that I do believe my pedicurist and another employee were discussing the state of my feet. Look- I get bad calluses and also, I go barefoot a lot and when I'm not barefoot I'm usually just wearing flip flops and they don't exactly keep the black dirt of Lloyd from my soles. That's just the way it is and it's one of the reasons I like to get a pedicure sometimes. Face it- my feet need professional help. And honey, I tip real well. And yeah, maybe they were talking about the condition of my feet and I can understand that. But then the guy starts in with those fucking clippers to cut away my toenail cuticles. I hate those things. And this time, it HURT! I actually, for once, spoke up and said to the guy, "That hurts!"
His English, although better than my whatever-language-he-speaks-is, wasn't very good but I finally got the message across and he looked at me accusingly and said, "Too much skin!"
Oh. Well. Sorry. I grow cuticles.
He lightened up a little bit and I sucked it up and got through that experience and then, when he started in with the cheese grater and the pumice stone he said, "So dirty!"
Well. Yeah. But it was ingrained dirt that could only be removed with the tools of his trade.
The cheese grater. The pumice stone. Whatever that stuff all is.
But it made me feel, well, shamed. You know?
And his so-called massage was a joke. I swear he only did one leg.
I shaved my legs for this?
And to top it all off, the man somehow figured out how to hurt me applying the polish.
It was just a miserable experience.

And did I complain? Did I say anything to the manager? Did I refuse to give him a tip?
No, no, and of course no. I gave him a very decent tip and he even said, "Thank you, lady!" as well he should have.
He was probably expecting me to stab him.
Lesson learned- don't go back to that place.

But shopping at Publix was a pleasure, as always. Although when the guy who weighed out my little piece of salmon asked me how I was doing and I said, "I'm good, how are YOU?" and he said, "Today is not my best day," I felt as if something very bad had happened to him. "Are you going to be okay?" I asked.
"I hope so," he said as he tore the piece of white paper from its roll to wrap my fish in. He did not sound like he had a LOT of hope though.
I didn't know what to say. Of course me being me I wanted to say, "Tell me about it. Let's talk. You'll feel better," but you just can't do that. So what I said was, "I hope so too and I'll be thinking of you today." He seemed to appreciate that and said three times, "You have a good day."
But god, I felt bad for him. One never knows. Did he just get a terrible diagnosis? Has his woman left him? Is one of his kids sick?
Well, obviously I am thinking about him and I do hope he'll be okay.

I've felt guilty all day long because I made the chickens stay in the coop. I've been getting about one egg a day and I know they're laying somewhere. But I really do hate keeping them, uh, cooped up, and although I should do the same tomorrow there is no chance that I will. Free range is free range and my chickens are. And the last time I checked I didn't even have one egg in there.
They're probably holding those eggs in for spite.
I don't blame them.

Okay. Here's something really funny. Remember the whole thing about peas and how I always buy canned peas when Mr. Moon goes out of town because he hates them and I love them? Well, I got this picture from him last night with the text message "I hope this made you laugh." 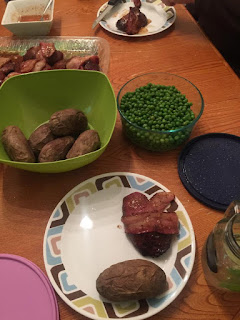 That was his supper last night!
And it did make me laugh. And I sent him this picture and said, "This is what you didn't get." 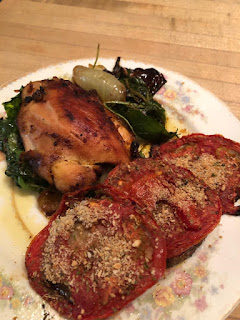 Which was a chicken shawarma with onions and greens and baked tomato and eggplant.

And tonight I'm going to be making this. 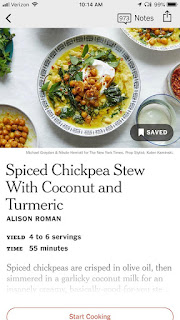 Or something resembling that.
We don't even need to discuss the naan bread I made last night with some of the discarded sourdough starter. No. No. We don't need to talk about that at all.
(Delicious.)

And I finished watching all eight episodes of "Unbelievable." If any of y'all have watched that, please let me know. There's one scene I really want to discuss with someone who's seen it.
Thanks.