The Man Is Home 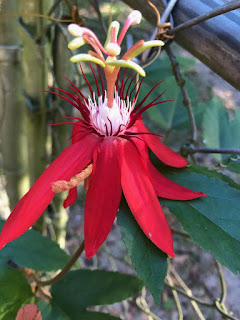 I was wrong about the time that Mr. Moon would be arriving home. He called me last night and said that it would be sometime around noon today and so it was.
As I had predicted he was exhausted. He first said that he wasn't going to worry about unpacking but just as I figured he would, he felt like he had to get it out of the way and so in came all of the uneaten snacks, the clothes, the equipment. I started in on laundry and by 2:30 the clotheslines were full of now-clean jeans and camo wear and jackets and socks. He took a shower and changed into his shorts (there's a sixty degree temperature difference between where he was and where he now is) and got into his chair and I made him a little lunch and after he ate it he fell asleep and I laid down on the bed and took a nap too.
It was just a lazy day.
He had a good time and said that on this trip "no one was an asshole" which is not a guarantee on these jaunts. I think he missed my cooking. Not only was he served peas but also cooked carrots, another one of his least-favorites, and said that the cook had not bothered with even salt or pepper. They took their breakfasts at the local hockey rink which was one of the main features of the tiny village where they were staying but the same woman did the cooking there as at the place where the hunters were staying.
I really had nothing of importance or excitement to relate. I showed him my sourdough starter and made him sniff it. He was hugely impressed.
Okay. Not really. But he did like the toasted cheese sandwich I made for him on a slice of it.

And that's been it.
The mystery of where the hens are laying is still unsolved. I am actually contemplating having to buy eggs which is ridiculous when you're feeding a dozen chickens. Of course, four of those are roosters but still.
We are parched and dry. The leaves crackle and crunch beneath my feet as I walk to hen house and clothesline. The next rain forecast is for Wednesday and I would not bet the ranch on that one. No matter what the weather feels like, it is time and past time to plant the fall garden. Hard to contemplate as the temperatures are still in the upper eighties. Watering will have to be involved.

Last night Lily sent a picture of Maggie pretending to be scared by zombies. 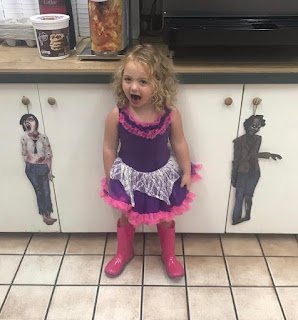 I'm sharing the picture because it shows the outfit she was wearing in all of its garden-boot accessorized glory. A friend of Lily's gave Maggie a bag of outgrown clothes that her own daughter wore and they are fancy. Should we call this ensemble the Sweetheart of the Garden Rodeo?

And this morning, Jessie sent a picture of August wearing what he had picked out to wear today. 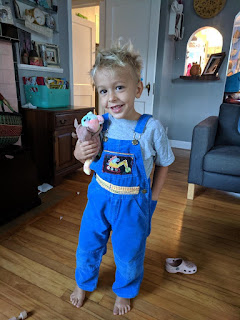 He loves his overalls. That makes me so happy.
So does his bedhead hairdo.

The big trial that I spoke of a few weeks ago has finally ended. One of the defendants was found guilty of murder and the jury deadlocked on the decision concerning his girlfriend. A mistrial was declared for her. The person we know who was on the jury is Lily and Jason's roommate and our friend, Lauren. I know she's glad for it to be over. The jury was actually sequestered for the deliberations. It's a strange case and most of us think (although I have not spoken to Lauren so I don't  have all the facts) that the victim's wife's family was responsible for hiring a hit on him but no one's been arrested for that yet.
Divorce gone bad, people. It will be interesting to hear what Lauren has to say about the experience.

And so it goes. The man is home, my red passion flower finally has a few blooms on it, the White House seems to be imploding but who knows? I'll tell you something I DO know- for some reason I am on the White House official FB page and it has become nothing more than absolute propaganda for Trump. For some reason, this scares me as much as anything.
In my darkest moments I do believe that Orwell's "1984" is finally here.
In my most hopeful moments, I try to believe that we shall overcome.
If only one could harvest hope from thin air the way one can harvest yeast. Perhaps we can, believing that it is always there even if invisible to the naked eye.
But it must be fed. Like the yeast, we must feed it.
I'm going to try.