I did laundry today for the first time in at least five days.
The last time I went five days without doing laundry I was in Mexico, I'm sure.
It was good to brush up on my skills (haha!) because Mr. Moon should be home some time early in the wee hours before the sun comes up. He is going to be so tired.
And he is going to have a lot of laundry.
Which is fine. I really don't mind doing laundry but it has been nice to have a break from it and to be honest- I've taken a break from a lot of household chores and instead spent a lot of time with kids and grandkids, making sourdough starter and eating peas.
No. Not really. I've eaten exactly one small can of Le Sueur peas but I surely have made myself some delicious meals. Tonight I'll be eating what was left from last night's salmon and braised greens and steamed vegetables. They were all so good. I've been trying very hard to eat more rationally and I think I've done well. Simple foods for the most part, but delicious, too. Stepping back and looking at each and every thing I eat is illuminating. The "just this once won't hurt" philosophy may stand up logically but it's always way more than once that I make choices that are not exactly eating all healthy and shit, as I've been known to say. Overall, my diet has never been horrible but I've been sliding down the slippery slope of being a bit too laissez faire about it all, reasoning that life is short and food is one of life's great pleasures. And this is true but it's not the entire truth and we all know that.
I'm not giving up anything although white sugar is easy for me to avoid for the most part and really- who needs that? But I'm not being weird about it. I refuse to slip down that other slope of disordered eating wherein a slice of cheese causes great guilt and consternation. Life IS too short for that shit.
Well, we shall see.

My sourdough bread does taste delicious and I love the texture. The crust is what crust should be and the insides are chewy but not too dense. It is satisfying bread. I am most pleased with it and it is easy to eat just a little of it. For anyone who is curious, I used this website as a guide to making my starter. I followed the directions closely but not obsessively. As someone in the notes for a sourdough bread recipe said- people have been making bread for thousands of years without the use of either weighing devices or measuring cups.
Or clocks, for that matter but still- following those guidelines certainly worked for me and I like the advice it gives about how it simply takes longer in some instances than in others for the yeast to start working but be patient- it will.

It was so lovely cool this morning and my walk was quite bearable. Jessie brought the boys out and we met Lily and Jason and Magnolia June at the Hilltop for our lunch. I've written about the Hilltop many times. It is the furthest thing in the world from either "fine" or "healthy" dining but one can make do there and it's always enjoyable. For one thing, it's not really a restaurant so the children aren't expected to sit at a table and behave while the food is prepared. We can go out back to the tables under shelter and the littles can find sticks to hit things with or do other things which are so pleasing and enjoyable to children. Today I read a few books to August and Maggie while we waited and also, I made a little video to send to Boppy. Here's a screen shot of August and Maggie from that video. Don't bother trying to play it. It won't play. It's just a picture. 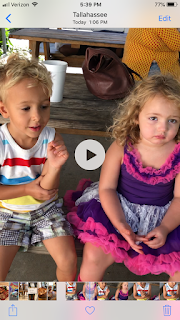 Maggie looks forlorn but she was not. How could she be in that dress? You can't really tell but she was wearing hot pink garden boots too. When she walked in with her parents everyone in the place smiled. She is so full of sass, that one. August's message to Boppy was that he loved him and that he'd like to watch TV with him soon. I'm sure that Mr. Moon liked that. We all ate our very adequate lunches and talked and when it came time for good-byes, August and Maggie were happy to give kisses. Even to each other. August came up to me and reached for my face and I said, "What do you want, love?" and he said, "You," and I bent over and he kissed me right on the lips.
I was delighted because his voluntary kisses are rare as emeralds.
When Maggie was in her car seat, I went to kiss her again and she refused. "I already gave you my kiss," she said, majestic as a queen on her throne.
As well she had.
Jessie drove me home and I gave the boys tiny little ice cream cones that I had in my freezer because they'd been promised a treat and they sat on the back steps and were in heaven, licking the chocolate ice cream and crunching the cones. August knew that those things were in my freezer and he's been after me for days to give him one so he was finally satisfied.
And there was some hallway dancing to a CD of Jessie's band, The Cicada Ladies, and then there was playing with toys and Lincoln Logs and trike riding in the hallway and the pushing of the stroller with babies in it.
After they left I got the laundry off the line, folded it and put it away, made up the bed with the clean, sun-dried sheets and pillowcases and thought about how good that's going to feel to my husband when he gets home.

It's been a fine week in Lloyd for me here on my own. I can't deny that. As I've so often said, I love solitude. It's not really about not having to take care of anyone but myself. It's about not constantly checking the clock to see where I should be in my day but letting the time flow as it will, filled with whatever it is I feel like doing. Of course, without the knowledge that my husband would indeed be coming home, this would all feel quite different. I am certain of that. And I seriously doubt that he feels guilty about wanting and needing to be out in the cold woods of Canada with guys and dogs and there should be no guilt on my part about wanting and needing to be here at home with only my cats and my chickens.
But of course I am a woman so there is a little bit. Of guilt. But then I've always said that guilt is my default emotion so this is to be expected. 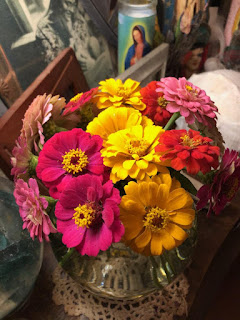 The last of the zinnias, I think. Oh, how I have enjoyed them this year! How brave and hardy they are to have survived this summer's late heat, the lack of rain. Even under those circumstances they have bloomed and given succor to the butterflies and bees as well as brilliant color and sweet cheer to my hallway.

Today is National Coming Out Day and I am humbled by all of the LGBTQ people I know and love who have done exactly that- come out- publicly and proudly. We who have never felt the need for any reason to declare our gender, our sexual preferences, or to have to defend our choices in who we love will never know what that's like. My hope and my belief is that one day no one will feel that need. That a child will no more have to tell their parents that they are gay or transgendered or bisexual or pan-sexual or gender fluid or whatever, than I had to tell my parents that I was, uh, straight.
That such labels will be unnecessary and that lives will simply be lived and that loves will simply be loved.
Of course, this is one more issue that we are having to deal with again as Trump and his minions fight to take back the rights of humans who do not fit into the cis-gender mold which have been so valiantly and often so bloodily fought for.
It should not even be an issue in any way shape or form. But we are not nearly there yet.

It's Friday. The moon is almost full. My husband will be home by this time tomorrow and I will love the one I'm with, as we should all be able to.