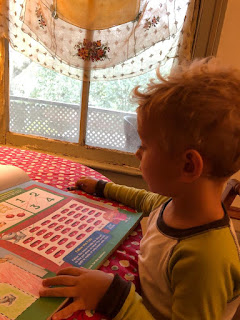 Everything went fine last night. After the Blizzard at Dairy Queen and the shared giant bowl of popcorn with Boppy, the child ate a largish bowl of spaghetti, a piece of bread with butter including the crusts, and a good amount of salad.
I was flabbergasted. Where in the world can the child put all that food? His entire stomach can't be as big as a baseball. And then, and THEN, after his shower, he convinced his grandfather to give him a miniature ice cream cone.
But he appeared to be fine and after a thorough reading of Mike Mulligan and His Steam Shovel and There's a Wocket in my Pocket (which is sort of a creepy book, really) he got into his little bed, cuddled up to Old Zippy, let me kiss him good-night and was out before I'd gotten to the doorway. And he slept until about 8:30 so it was a good night. 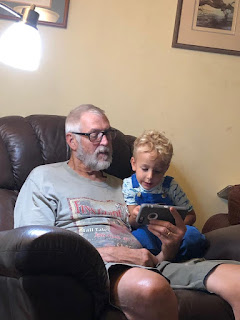 and I did some stuff with him in a giant activities book and he played with toys and then his mama and his brother came to pick him up although Levon was asleep in his car seat the entire time she was here. August wanted his "good-bye treat" which in this case was a small container of sweet and salty Chex Mix which was regarded with great joy as there were about three miniature M&M's in it.

So that was all good and then I started some laundry and organizing and went to town to pick up a few things I needed and on the way home, as I was chewing my anxiety out with a Mento, the Mento attached itself to a gold crown of mine and pulled the fucker off.
Not the Mento's fault. I'm sure that it was ready to come off. I think it's probably a combination of age and the fact that I grind my teeth that had prepared it to give way from its tooth.
Shit, shit, shit, shit, shit, shit, etc.
I came home, googled "What do do if your crown falls off" and every fucking website said that the first thing you do is make an appointment with the dentist IMMEDIATELY.
And we're supposed to be heading out of town early tomorrow on our journey to Mayo and to Roseland.
I called my dentist's office and they do give the Doc's cell phone in case of an emergency if you are an established patient and so I called it and he didn't call back for hours but Mr. Moon had to go into town himself and so he picked me up some of that temporary dental adhesive and I finished the laundry and packed my clothes and toiletries and our supplements and snacks and medications and all of that stuff and Mr. Moon got home and I glued my crown back on and then the dentist called.
He said that if I'm at his office by eight a.m. he'll take care of me.
I said, and this IS a quote, "You are so precious."
He laughed in a way that makes me think that possibly people do not generally tell him that he is precious.
I am not having any pain or sensitivity so I am hoping with all of my heart that it'll be a simple matter of slapping that fucker back on with some of the real glue and sending me on my way. Then I'll speed home, we'll load the car and hit the road.
Funny how I was so anxious before about just the general packing and getting on the road early enough and all that stuff and then suddenly I was holding my crown in my palm and wishing with all my might that I was only sweating the small stuff.
And anyone who tells me not to sweat the small stuff is not going to get a grateful thanks from me because yes, it IS all small stuff and that's what adds up to the big stuff and besides that, when you have anxiety you don't even need the small stuff to worry about. You just pluck any ridiculous thing out of the air and start going crazy over it even if it doesn't really apply to you and god knows I should be used to it by now.
I still wish I only had the packing and timelines to worry about but talking to the dentist has helped tremendously. This is a guy who met me once at his office at dusk on the night before Christmas Eve to put that crown on originally and I appreciate his dedication.
And he IS precious.

I better go pack my jewelry which, like my make-up will probably barely be used.
But it IS my anniversary trip so I should take some of my girlie stuff.
And even as I write this I am thinking, Phone charger, headphone charger, pillows, New Yorkers, crossword puzzle, favorite pen, journal (?), laptop, camera (?), binoculars (?), Benadryl, Ibuprofen, martini glasses...

Jessie asked us today if we had a lot to do to get ready. Mr. Moon said, "Nah," and I laughed to myself. All he has to do is throw his clothes in a bag, get his fishing stuff together, and trust that I've packed the rest.
But quite honestly, I will admit that I am sure that he's going to be packing some anxiety himself as to whether or not Mayo will have any answers for him and if so, what they might be.
I am quite certain in my soul that they are not going to tell him he's dying any more than any of us are dying but still, as much as we want answers, we want GOOD answers with possible remedies.

Breathe in. Breathe out.
Repeat.
Think of Roseland and grandchildren and children and that sweater that Sue lent me which charmed this man into asking me to dance and what all that has led to and the Atlantic Ocean and the Sebastian River and sunsets on docks of bays and gulfs and seas, and torments survived and sorrows shared and joys multiplied and dreams verified and making the absolute most of whatever we have before us.

And not to forget to set the alarm.