The Sweet, Sweet Smells Of Rain And Fabuloso 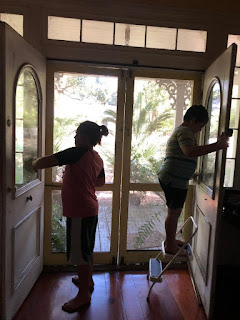 My hired help showed up this morning around 10:30 and I put them straight to work. First I gave them each brooms and assigned half of the porch to Owen and half to Gibson. This job seemed somewhat daunting to the boys. There were a lot of leaves on it, blown in from the trees in the yard, many of them in hard-to-reach places behind flower pots.
"You have so many plants!" Owen said. "It adds to the awesomeness of your house but it's really hard to sweep around them!"
Well, he was correct on both counts. While they broom-bristled leaves about I scrubbed the glass top table and told them about my wild yeast. Owen thought that was really cool. We went into the kitchen to smell the starter and look at the bubbles. Neither one of them had ever heard about sourdough bread.
"Is it sour?" they asked.
I assured them that it was.
After several breaks and glasses of ice water, the porch was at least somewhat cleared of leaves.
We moved on to the windows in the doors in the hallway, front and back, and the panes beside them. This went somewhat better although they used up all of the glass cleaner and about half a roll of paper towels. I did the highest parts. I also determined that my all-purpose cleaning solution of Fabuloso, white vinegar and water works quite well on glass. The last chore was the sills on the back porch. I know I've said this before but the dirt in Lloyd is black as night. In fact, when I first wiped the table down and showed them what the rag looked like, Owen screeched.
I mean, it is BLACK. And sort of sticky. I think it's because of the over hundred years of trains rumbling by on the tracks behind my house.
But after the sills looked a lot better, cleared of at least some of their Lloyd dirt, I offered to make them toasted cheese sandwiches. I gave them samples of the sourdough bread to see if they wanted me to use that or regular bread.
They loved the sourdough.
And then it was time to head over to the Wakulla River. Since school was out today, there were quite a few people but it wasn't crazy. Jessie and her boys and Lily and Maggie all joined us and we set up our blankets and towels and chairs and snacks in the shade and the fun began. There was a bus from a church and it appeared that all of the little boys they'd transported were playing football. Owen, instead of jumping in the river started watching the game.
"Go ask if you can play," said Lily, but of course that's hard for a ten-year old boy. Finally when the bigger guys took a break, Owen did join them and by the time the older ones came back, he was fully invested in playing. And he played football with those boys for about two hours.
"Come get in the river and cool off," we'd tell him when he came over to slug down some water.
"No," he'd say, and then he'd jump back into the game instead of the water.
I think he had a great time.
Gibson and Maggie and August played together in the water and on the sand. Jessie had brought a big blow-up float and they enjoyed that a lot. 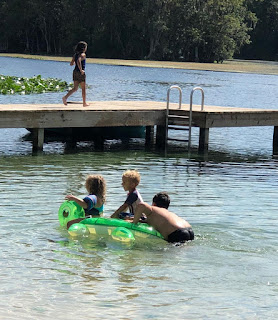 When I got in the water to cool off, all three of them pretended to be alligators and chomped me. "Don't chomp the mermaid, you alligators!" I kept telling them. They giggled and chomped some more. Levon mostly hung out on the sand although he was pretty interested in the snacks. Here he is sitting on Lily's lap. She did his hair for him. 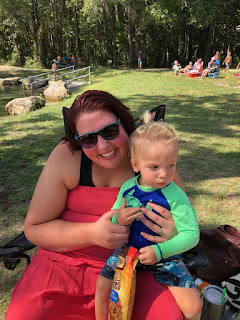 Jessie keeps saying it's time for him to get a haircut but I think he looks good with his little surfer-guy blond hair.
And so it was a perfectly relaxing afternoon. We kept an eye on the kids and talked and people-watched. We handed out snacks. The kids can entertain themselves at the river forever although after about two hours, Levon walked up to this mama and said, "Back home now."
"Do you want to go back home?"
"Yes," he said.
And eventually we all sighed and packed things up. Gibson had hip-hop dance class this evening and Jessie knew her boys were about worn out.
So there were hugs and kisses and everything was stowed back into cars and off we all went to our various destinations.
I tidied up where things had been cleaned and made up another batch of sourdough to rise. Last night I prepped a casserole made of rice and spinach and the getting-funky greens I hadn't finished during Mr. Moon's trip, so I added milk and egg and cheese and spices to the rice and cooked greens to get it ready for the oven. I watered the porch plants. The many, many porch plants which add to the awesomeness of my house.

It's gotten warm here again today but the forecast says we're going to get rain tomorrow and the next day too. And just as I wrote that, I caught the whiff of ozone in the air and damn if it isn't sprinkling just the tiniest bit. With the rain cooler air is supposed to come and that will be tremendous.

I've got house sitters and critter tenders lined up for the week we'll be gone. This takes some of the worry off my mind. I still haven't figured out a place for us to stay in Jacksonville. I need to do that. And look! 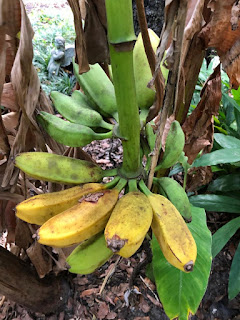 My bananas are getting ripe!

Have you heard about ACE's? Adverse Child Experiences? Scoring them? And also, resilience factors?
Jessie and I listen to the podcast Armchair Expert made by Dax Shepard and on one of his most recent shows he interviewed Nadine Burke Harris, California's surgeon general which is where I first heard about the screening program based on ACE's. It was fascinating.
Go HERE if you'd like to learn more.
And go HERE if you'd like to learn about the podcast.
Shepard is quite open about the childhood sexual abuse he experienced as well as his battle with addictions, his sobriety, and his increasing awareness about how the experiences of childhood affect us throughout our entire lives. Not all of the podcasts are life-changing by any means but they're interesting and I enjoy them.
Mostly.
But this one in particular was pretty darn enlightening and I wish that every child in the US was screened by this criteria in order to get help in learning healthy, positive ways to deal with trauma.
That's my little soapbox moment for today.