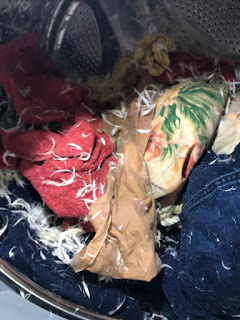 Today did not start out too well. I did another load of laundry, this time including two pretty little pillows that I got at a thrift store. I knew they were feather pillows and they had nice tropical linen-like fabric coverings. I've always wondered what would happen if a feather pillow broke in the washer and now I know because one of those pillows just completely lost its integrity during the spin cycle, I guess.
Luckily, not nearly ALL of the feathers escaped their covering for which I am eternally grateful but there were enough in the washer to bring me a bit of despair which only added to the despair I had woken up with but what can one do?
Sigh and start cleaning up feathers.
Which is what I did.
And I may even use the feathers that were remaining in the pillow case and the ones I collected from the washing machine to make another smaller pillow. Perhaps a pillow for one of the children to use when they come to spend the night.

I had to go to town to pick up a few things and I met Jessie and August at Costco. August was in a fine mood but unfortunately, the mood did not include him wanting to listen to a thing his mother or I said. The child is testing his limits, feeling his oats, and generally being a child.
A cute child. A giggly child. But a child all the same.
Jessie asked me if I had any advice.
I thought a moment and then said, "Yes. Get plenty of sleep so you can deal with this phase."
And that's as good as I can do.
I have always been a believer in the bribe-and-distract school of motherhood and that will work with August for a second or two if the object of bribery is good enough. Distraction doesn't seem to be working. I asked him to tell me all about how happy he was when his daddy got home but he just dashed off to hide between stacks of bottled water flats.
He'll be fine and Jessie will live through this but as we all know, it's not easy when it's happening.
I swear the child has grown noticeably in the week since I've seen him. I told him, "August, I think you've gotten taller this week."
"Yes," he said, "I have."
Well I do love that little monkey and his brother too. Vergil kept Levon while we were out because it was time for the little guy's nap so I didn't get to see him. He probably would have been all over the place following his brother if he had come along.

After Costco I went to Publix where the lady who checked me out was absolutely insistent on finding out if I was having a good Monday, if I had found everything I was looking for, if I needed stamps or anything else, and again- was I having a good day so far?
I almost broke down and told her that I was having a lot of anxiety, I'm sixty-five years old and am still not sure what I should be when I grow up, and that the state of our country is making me insane. And by the way- does she know about the wildfires in California?
However, I did not.
She asked me if I minded if she put my chicken in a plastic bag before it was put in my cloth bag. I said, "Yes, I do mind..."
But before I could finish my sentence she had tucked that sucker in a plastic bag and the bagger looked at me and I said, "It's fine. It's already in the bag."
More despair.
And really- such first world problems. Am I right?
She ended our encounter by telling me under no uncertain terms to HAVE A NICE REST OF MY DAY! and I couldn't wait to get the hell out of there. I wanted to tell her that no, I absolutely fucking refused to have a nice rest of my day and that she was not the boss of me but I didn't.
This is what I get for not going to Lily's Publix.

Then I had to go to the place where I get my compounded hormones. I love the lady who works there. She's got to be eighty and she's sharp as a razor and always dresses beautifully with full-on make-up and jewelry. Her son is the main pharmacist. There were some other ladies talking about how much the CBD at the counter cost but this woman wasn't having that. "It's magic medicine!" she said with great authority. "You can't believe how many people have told me it's changed their lives!"
When they first started selling it she told me that she'd been raised a good Baptist girl and it took her a long time to accept anything related to marijuana but that she'd tried it herself and she believed in it.
Bless her.
The phone kept beeping when it was my turn to check out and I said, "You can get that if you want," and she said, "Nah. I'm just hoping someone else will pick it up."
Like I said, I love her.

Then I came on home and unloaded the groceries and cleaned up some more feathers and got out in the garden to get it ready for tilling. I pulled spent zinnias (they've already reseeded) and weeds and tried to dig up a few sweet potatoes. I just do not know what I'm doing when it comes to sweet potatoes. I try to follow the directions I find online but I still haven't really figured it out. The ones I found today would be a lot more impressive if they were carrots but even for carrots they would not be overly huge. And in this case, quantity is not making up for quality.
It's a damn good thing I'm not a Florida pioneer woman with a family who depends on sweet potato pone for sustenance. But it was a good thing just to get in the garden. Maurice came and hung out with me as she does. 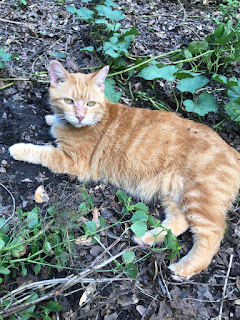 Then Fat Old Jack interrupted his twenty-hours of sleeping on my bed to come out and chase Maurice under the basil plant which is about as big as a dining room table now and settled down about ten feet away to make sure she didn't move. When I went back out an hour later to pick up the handful of miniature sweet potatoes I'd left on the ground, they were still there in the same spots. Mr. Moon chased Jack out of the garden and Maurice slowly and with great caution crept from under the bush, ran out of the garden and escaped to who knows where.
That poor cat.
Of course while I was petting her in the garden with my gloves on, she still managed to break the skin on my wrist with one of her bizarre attacks.
I have no idea why my cats are so weird but they are. And of course I love them to pieces.

So that's what I've done on my first day back. Oh. I also took the trash and recycle, watered the porch plants, fed my sourdough starter and made up a dough for a loaf of bread to be baked tomorrow. The more I read about sourdough bread, the more I realize I do not know except that I'm pretty sure I'm doing it all wrong.
I think I'm supposed to use starter to make dough only after it's been sort of force fed and is foamy and bubbly instead of just using what I have and that I should allow up to three days to make a loaf. Say what?
I say that if you can't get that shit going in twenty-four hours that it's too much trouble for me.
Maybe.
Well, we'll see how it works out with the mere overnight rising with an obviously undernourished starter. 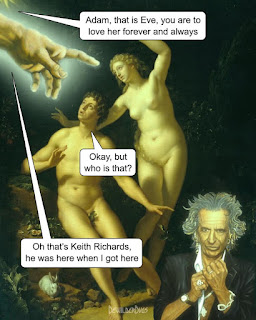 Made me smile. Hope it makes you smile too.