I Am Here But Already Drifting Down To The Flowing River

The rain cleared today and now we're supposed to get the cooler temperatures tonight. Down into the fifties which for us is chilly weather.
Don't laugh. It'll be a reason to dig out the Goodwill cashmere.
For at least half an hour. Maybe.

Today's adventure took Lily and Jessie and me and the little ones to Monticello. There were some bar stools that I had seen last week and I wanted to buy them if they were still there. We stopped at the library first. All three of us women seemed to be low energy today. Jessie was awake with Levon in the night and then he was up at 5:45. Lily was tired from work and being a mother. And me? Oh, who knows? Still in my stagnant phase, I suppose. So the children played games on the computers and we mostly just sat and talked. I am so fortunate to have grown children who are my friends to talk to, to laugh with.
I am quite sure I'll never get over the wonder of that. And I most certainly never take it for granted. Besides that aspect of having grown children, I also love seeing how the sisters relate as mothers. They have different styles of mothering, for sure, but both styles absolutely have the best interests of their children at the base of them. Lily with her three children, her ten years of being a mama, is a bit more relaxed although Jessie is far from overly protective. And they effortlessly mother each other's children when the situation calls for it. Lily is like a mother bear, scooping babies up and loving them and Jessie is a relaxed and loving auntie to Maggie and Owen and Gibson. It's such a beautiful thing to see. When they were little, their relationship was difficult. Lily was almost four years older and had a very alpha personality if one can apply that term to an older sibling. She was, quite frankly, the boss of all of us, and they were discussing how much easier life was for Jessie after Lily moved out of their shared bedroom. But they don't discuss these things with animosity. They just admit that they were completely different in so many ways and that trying to share space with each other was a bit of a disaster.
I listen to them and think of how my brother who is closest in age to me and I simply cannot get along, even now. It's one of the saddest parts of my life that our childhood experiences still get in the way of us being friends. I know we love each other. There is no doubt about that. But no matter how much time passes between our visits and no matter how much we both (I am certain) vow to keep our tempers and our tongues, inevitably something will arise and the next thing you know there is more anger between us than I am sure either of us ever experiences with anyone else.
There is a sheer violence to it which scares the hell out of me. And my brother is not a violent man and god knows, I may have some anger issues but outward shows of them is absolutely not what I do.
I have my own theories about this, about why it happens but when I try to discuss those with him, he gets even angrier.
And I suppose we could say that my youngest brother and I are estranged (and he keeps a huge distance between himself and all of his siblings) and also that my relationship with my middle brother, although loving, is not what it could be. We do not see each other nearly enough. Our mother's death somehow precipitated a splitting apart of us all that is absolutely dreadful and painful and none of us are in close contact.
So seeing my children all being tender and sweet and funny with each other is a sort of miracle to me. In a way, I think it is a very good thing that all of my children are so different. Competition is simply impossible when differences are cherished and respected.
At least, that is how it has seemed to work out in our little family.

So. Back to our day in Monticello. Mr. Terez was happy to see us and we were happy to see him. After the library we went to the place where I'd seen the bar stools and they were still there and I bought them and Lily and I hauled them to her van. 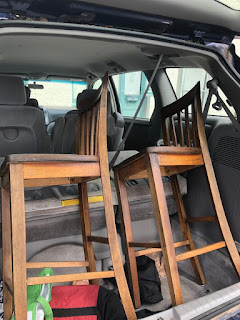 Then we went to Wag the Dog but nothing was purchased today except for a few books. The scary Halloween bride out front gave Maggie and August an excellent photo opportunity though. 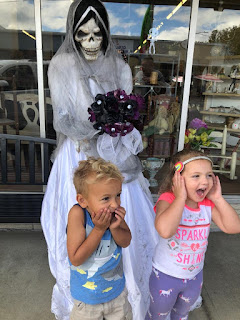 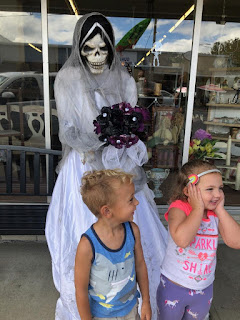 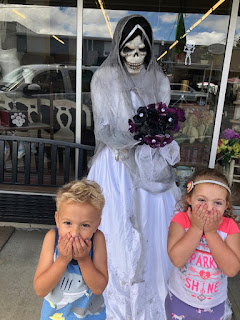 This is them acting scared. Which of course made them laugh. And made us laugh too.

We had our lunch at the Rev and it was tasty as always. Our diets are so diverse now. We're like one of those new-age jokes about diet-obsessed customers in restaurants.
"Does the meat have any soy-based products in it?" "I'd like the salad but please, no onions."
They accommodated us graciously.
The children were happy with their kid meals with french fries. Maggie got her chicken, August and Levon had venison sliders. And I got a Greek salad with shrimp.

And then home we came where I discovered that my bar stools are a bit too tall and so Mr. Moon is going to have to cut off the legs a little. Right now he's out taking a tire off the tractor.
There is something so comforting about having a man about who can remove a tractor tire. Truthfully, I love having a husband who has a tractor. I'm not sure why. I guess because that represents something that I so primally need and am attracted to.
I had a friend once who talked about "the changers of the oil and the tillers of the soil" and I suppose that is exactly who I married. On the other hand, he can tear apart a contract until an attorney weeps so there is that too.
I can't believe that a week from right now, we'll be on the dock in Roseland, watching the last color from the sunset, hearing the plash of fish doing their twilight feedings in the shallow water, watching the current take the water from here to there and back again. The river of my heart.
I dreamed this morning that developers were tearing up not only Roseland but the river. The islands were being dredged apart, the jungles growing on them torn up and the trees broken and twisted, the little strip of land between the white sand road and the water where there are pine trees and a few little houses, destroyed.
I was trying to tell two people that I know what was changing, how horrible it was, and to explain to them what it had been like before.
They didn't really care although they tried to be interested.
"Do you want to go see the spitting lions?" I asked them. Somehow I knew they were still there.
"Uh, sure," they said, but I could tell it wasn't a priority.
And then I found myself my in my grandfather and grandmother's old cottage and people were living there and it was horribly awkward and I saw amongst their things, things from my childhood.
This is all so obvious and I suppose a response to Thomas Wolfe's "You Can't Go Home Again."
Strangely, Roseland, sixty years later IS the place where I can go home again but there is always the fear that I will return to find that untrue.

Well. We shall see, won't we? I have a feeling that the islands will be intact, the strip of land just as I left it. The little Community Center will still be sitting on the property that I just found out a few years ago that my grandparents had donated to the little village, the ospreys will nesting in the pines and the railroad trestle will  still be spanning the river as it has been since long, long before I was a child.

And all of that is a joy I cannot even begin to express.