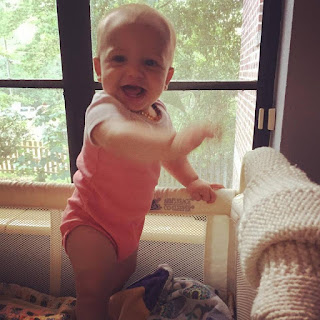 Well, there you go. Levon can pull up. All by himself. And Jessie reports that he just keeps doing it and it makes him so happy. If I ever saw a child determined to keep up with an older sibling, it is that child.
Well, besides Jessie.
She herself started walking at eight months and it was hysterical because she was about as big as a Barbie doll and people stared in wonder at the sight of such a miniature thing walking like a real human being. But, like Levon, she had places to go and people to keep up with. Her big sister Lily in particular.

So Levon's brother is here for the night. He arrived with his Boppy and came to find me. I was taking a nap. Unlike yesterday, I really was lazy today. Some days I can take the heat and today was not one of those days. I got out of bed and scooped that boy up and kissed him and put him down and he said, "First thing, TV!"
Mr. Moon had told me earlier today that he was just going to tell August that the TV was broken which is sort of true in that he accidentally cut the lines to the Direct TV the other day when he was trimming azaleas but of course we do have Netflix. "He's going to figure that out," I told Mr. Moon and by the time I'd washed my face and gotten myself together from my nap, they two guys were sitting in Mr. Moon's chair watching something animated about the frontier and horses and a train and a little girl and so forth. I took a picture and Mr. Moon said, "Don't send that to his mama," but I did, of course.
She doesn't care. She texted me that about an hour before Boppy showed up, August had his giraffe backpack on his back and said, "I'm just going to sit here on the floor until Boppy comes."
This reminds me of when Owen was a little fellow and he used to pull the tall stool up to the kitchen door and sit on it and wait until he saw his grandfather drive into the yard.
These kids love their Boppy so much and they should. He is the sort of man that a child can look up to in all ways and they intuit that as well as knowing how much he loves them which is immensely. I can't imagine a child feeling any safer than in his company.

Watching TV can make a man peckish so I made some delicious popcorn for the Big and Little Boppies. Boppys? Whatever. 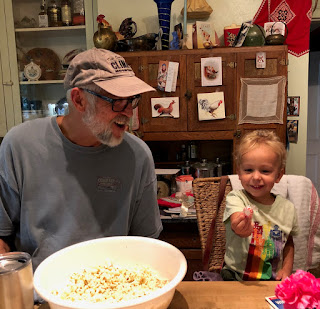 But then August spied a peppermint in the egg bowl and wanted that and so, because we are the grandparents, we let him have it and he licked it like a cat and Mr. Washcloth had to come and get all of the peppermint stickiness off his hands. Mr. Washcloth is very fond of peppermint.

The alphabet puzzle was put together. 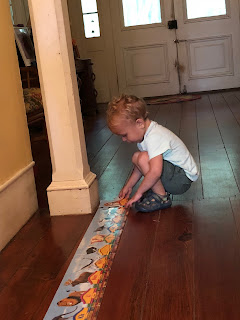 I wish I had a dollar for every time I've helped a little person put that thing together.

Mick is doing all right today. He seems to be hobbling with a little less effort. Still no resolution on the dog situation. His rear end makes me so sad, though. And one of his feet seems to be a bit wonky although he can put weight on it. We'll coat his butt with the magic ointment again tonight.

I did not get up to watch the royal wedding but every bit of it that I've seen online makes me happy if for no other reason than the fact that when Harry and Meghan look at each other they sure do seem to mean it. It would appear that Harry (how I love that name) adores her and if she doesn't adore him then she truly is one of the best actors in the world.
And just...DAMN on how beautiful it was to see her mother sitting in that ancient chapel, trying to hold herself together and can you even imagine what was going through her mind?
I can't.

I better go get supper started. August didn't get a nap and I know he's going to need to get to bed at a reasonable hour. I asked him if he wanted to sleep in the big bed instead of the Pack-n-Play (not the same one that I raised the baby chicks in-don't worry) and he said, "No. I don't like a big bed."
Well, you don't put a tiny sproutling in a giant pot and he can sleep where he wants to.

May we ALL sleep well tonight.