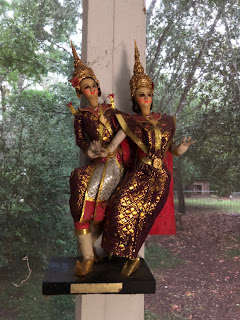 I've been as lazy today as I can recall being. My entire productive output besides the usual laundry and stuff was cleaning out the poopy hay in the chick night roost and in the big chicken's nests. That took about fifteen minutes including hauling it out to the garden and spreading it around for mulch.

I started sewing on a dress for Magnolia which I'd cut out the other day but something's wrong with the tension on my old Singer and I can't fix it for love nor money. I got out the amazing little instruction booklet which came with the machine but as usual when I try to figure out tension, I just give up. I have no idea how it could have gotten so out of whack unless a little person fooled around with my Featherweight last time it was out which is entirely possible. I did a full lube and oiling of the machine this morning before I started sewing and I guess I could have screwed something up there but I doubt it. Oh, who knows? But there are videos on Youtube, of course, and I'll work on it sometime but that time was not today.
Instead, I took a nap.

Subtropical Storm Alberto has turned out to be not much. We got a tiny bit of wind and some good rain but nothing scary at all. I'd say something positive about the electricity but I don't want to jinx things. I've been in good contact with the Dog Island pirates and they've been having a great time. The pictures they've sent have been tremendous.

Rachel sent me this one.
Click on it to see the full amazingness.

This morning Anna reported that the herons and pelicans and osprey were feeding like crazy and the mullet were jumping in large numbers. Yesterday they said the bay was filled with rays. I have to say I'm somewhat jealous. To be out there during a storm that isn't particularly dangerous but one that calls forth the storm behavior of the creatures, both of sea and of air and which draws the water up and then sends it out, which chops it into waves and then smooths it out again, which fills the sky with bruise and with silver- well. That's got to be something.
They're not going to be able to come home tomorrow which was their plan, because the boat captain doesn't want to risk the crossing until the next day.
I do not think they are too disappointed.
Or at all.
I just hope they have enough tequila.

Seems to me that Mick's been acting a bit stronger today and the chickens of the young flock have spent a lot of time scratching in the little strip of underbrush and trees between the hen house and the railroad track. They sure are growing fast right now.

Mr. Moon's been working on his bathroom all day long. He's got the floor tiled and is working on the shower floor. He so sweetly stopped work when I laid down for a nap although I told him not to. I would not trade that man for anything on this earth. We've spent a lot of alone time this weekend and it's been nice. We still make each other laugh and we're still pretty sweet on each other and I can't imagine anything better.

Ms. Magnolia's coming over tomorrow morning while her mommy gets a root canal.
Poor Lily!
But it's good that she's getting this taken care of and I'll be glad to see my granddaughter. She needs some MerMer and chicken time. Maybe we'll stroll up to the post office and then pick some green beans.
We'll see.