Something's wrong with my blog and the comments situation because I did not get notified of one comment via email on my last post and that was a bit sad for me but I just checked the actual post and see that I did get some comments and I am so grateful.
I mean- I actually DID something yesterday and had pictures of turtles and stuff. Which is far more exciting than what I usually post.
So. Thank you for the comments. Always. I try to act like it doesn't matter and I never check my stats but it is nice to know that I'm not all alone here in Lloyd. Just me and my chickens and my cats and my husband and my grandchildren and my children and my books and garden and Rolling Stones videos.
Poor me.

We've had a very low-key but very cozy day here. Alberto, the either sub-tropical or tropical storm depending on what you read and I have no idea what the difference is, is making its way up the Gulf.

I hear that Cozumel is back to being sunny and beautiful while we're getting rain and a little wind now and then. Nothing much although I will say that when I woke up and went outside this morning I could feel that a-storm-is-coming feeling that all of us who live in hurricane target areas know so well. A literal calm before the storm which has a tint of green and uneasiness to it. But I don't think it's going to end up being much besides a lot of rain. Hank and Rachel and their posse on Dog Island are sitting it out even though there's been an evacuation order for all of the barrier islands in Franklin County. The order is seemingly being ignored by everyone and I imagine there will be a hell of a good party at Harry A's tonight on St. George Island which is just a bit west of Dog Island. St. George does have a bridge and a lot of residents and vacationers, and Harry A's is the venerable and beloved bar where everyone does indeed know your name. And if they don't, they will in about five minutes. If you haven't fallen off a bar stool at Harry A's, you aren't really a member of the community.
(And, in truth, I never have and it's not a goal of mine to do so but never say never.)

So Mr. Moon and I sat on the couch this afternoon and watched a movie and ate popcorn which we NEVER do. Dang. This is the weekend for doing things we never do. First hot dogs, now this. The movie was While We're Young and frankly, I was highly unimpressed. There were a few good moments but I liked the popcorn better than the movie. Still, it was fun just sitting on the couch and cuddling up to the man.

The rain's coming down pretty good now. I don't see any of the chickens but a little while ago Mr. Moon and I went out to do a garden viewing (the tomatoes are getting eaten into lace) and we saw that the youngsters have made it as far as the inside of the fence and we about burst our buttons with pride. As they ran the length of the fence I said, "We have a herd of chickens!" and it appears that we do. Mick is hanging in there and doing his best. He is still eating heartily which heartens me.

I have a refrigerator full of leftovers and even though I consider myself to be a master at combining things to make soup of, I just cannot figure out how to meld what I have at the moment into something edible. I could go with the venison roast with potatoes and carrots and green beans and the black beans and rice but I cannot, for the life of me, figure out how rock shrimp, cheese grits, fried tomatoes, hot dogs and baked beans could possibly marry with them.
Wouldn't be prudent, as the elder Bush always said. Throw in the carrot and raisin salad (which was delicious, by the way) and it would just be a damn mess. All of the sherry in the world would not make this taste good.
I think I'm just going to heat everything up, set it all out on the counter, put every condiment I can think of on the table and hand my husband a plate.
"Have at it!" I will say.
And whatever's left is going to the chickens because my refrigerator is so full of bags of carrots and beets and green beans and peas that I can't find anything.

What a terrible problem to have, right?

Also, my tick bite itches like holy hell and I have a chigger bite which is itching too and my house is infested with what we call sugar ants and yes, they do bite, goddamn it.
Storms, be they subtropical, tropical, or full blown hurricanes, heat, humidity, Florida Man, insects, Florida Woman, (P)rick Scott, alligators, salt-water crocodiles, bears, wild cats, snakes, and mildew- as I asked yesterday- WHY do I live in Florida?

Because I'm too lazy to move, I suppose. 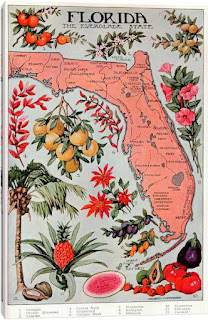 I'm just livin' the dream, y'all. Living the dream.