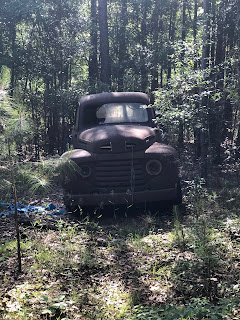 I don't know. I might be getting a little obsessive about these walks. My legs hurt like hell this morning and I knew I was going into town but I was determined to get four miles in to make my weekly total. So I got out there and I walked a part of a different loop of the road I walked yesterday (which is where I took that picture of the rather beautiful truck, all lonely and by itself in the woods) and that last hill about killed me again and by the time I got back to my car my pedometer app said I'd only walked 3.75 miles and I said, "Fuck that," and walked another quarter of a mile.
Did I mention I downloaded another pedometer app, just to make sure I'm getting my milage right?
Obsessive.

Whatever. Another thing I did this morning was to decide that I wanted my bathroom back and all baby chicks were moving out. So I packed their little suitcases and kissed them goodbye and waved to them as they walked down the long dusty road to the coop.
Just kidding. I put them in a box and carried them out there.
It's warm, they're old enough. I'm done with the inside phase of chicken raising for now.
Mr. Moon told me that I'd forgotten to close the sliding door between the coop and the hen house whose door was wide open and so many of them were outside when he got home today. He got them back in but was unable to do an accurate head count. It's not easy to count nineteen chicks who won't stop moving.
Sigh.

I did go to town because it was Thursday at El Patron day. Here's Rachel holding Levon. 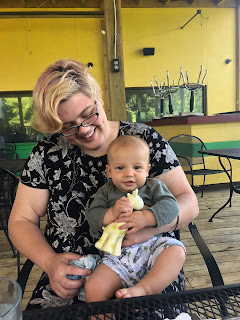 He's such a happy little guy. Since Boppy wasn't present, August sat on my lap for a good portion of the time we were there. It's amazing how much he loves me when his grandfather isn't around. Jessie told us that either yesterday or today (I can't remember which because I can't remember shit) the child came up to her and said, "I can spell August."
"Okay," she said. "Spell it."
"A-U-G-S-T."
Which, yeah, isn't exactly right but Jessie was unaware that he knew any of his letters and he's not going to be three until September.
How do these things happen? It's like when Hank wanted me to teach him to read at the age of three and I started writing things down like "cat" and "hat" and so forth, he could already read them.
Sesame Street was big then and he paid attention. Obviously.

After lunch I went over to Jessie's and babysat for the boys while their mama went to a doctor's appointment. It was fun and they were well-behaved. Levon is quite mobile on his tummy now and I would not be surprised if he didn't start pulling up soon. I gave him a bottle of his mama's milk which he held all by himself and drank most greedily and then when his mother came home, he went right for the breast. As usual, a lot of books were read and there was a delicious snack of pimento cheese and pretzels. August and I had a little pretend session wherein I introduced myself as if we'd never met and he said that his name was "Auga" and he lived in a forest. It went from there. He's a whippersnapper, that boy.
When I was getting ready to go home he said, "Don't leave, Mer!" which tore my heart out. "Do you want me to live here?" I asked him.
"Yes," he said.
"Where will I sleep? Can I sleep with you?"
"Yes," he said again. And then he thought about the fact that his bed is pretty dang small and started to laugh. When I did finally leave, he was eating some leftover birthday cake and happy as a clam.
Chocolate can ease our pain and sorrow, as he has already learned.

Mr. Moon has removed the Pack-n-Play from my bathroom and I'm about to go in there and try to create a little chickless order. And then I'll make our supper of delicious and super easy clam spaghetti. Tomorrow Owen and Gibson are coming over to spend the night and we are way overdue on that.
Lord. Why don't we all just live in a family compound? It would make things so much easier.
Maybe in Costa Rica.

I'll get right on that. I bet there are walking trails in the jungle galore there. Wonder if my pedometer apps would work there, though?
I'll start googling.