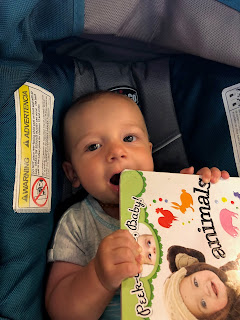 This is the only picture I took today except for some really lousy pictures of a flower in my yard which I think is salvia but probably isn't. I swear- my mind is like a sieve filled with swiss cheese these days. Listen to this- I have a plant in a pot on my porch that I have been thinking was an avocado for forever and just today as I was watering my porch plants, I realized it was about to bloom and that it is, in fact, a gardenia.
I'm almost certain.
Here's another thing I did today- I unloaded my washing machine and put all the wet clothes in the dryer, closed the door to the dryer, closed the door to the washing machine and then started the washer. With nothing in it.
A little while later I was thinking, "Jeez. Did I start the dryer after I put the clothes in it?"
No. I started the washer.
What the hell?
The only way I can shop these days is with a list and a pen in my hand. I have to cross things off the list to absolutely make sure I've gotten everything. I saw a woman in the store the other day with her list on a clipboard.
What a great idea! I thought.
I must have a clipboard around here somewhere. And don't tell me to use my phone. Please. I need the pen/paper/writing/scratching off thing to make my old brain work. Otherwise I'd probably just be in the cracker aisle watching Rolling Stones videos having completely forgotten I was shopping if I tried to use my phone to keep my lists on. I'm as easily distracted as a kitten with ADD.
Oh well. It is what it is and it seemed like the universe was out to get me today as I was driving from Costco to Jason's Deli where Jessie and I went to have our salad bar lunches. First thing that happened was that as I took a right-hand turn a car stopped right in front of me as if the driver had decided to suddenly back up. This is a relatively large highway. After that driver got her shit together and I was praising myself for not running into her, a truck decided to make a left-hand turn (and I was in the left lane at that point) but only got himself partly through the place where you have to wait to make a turn which meant that again, I had to stop quickly and inappropriately AND the fucking crazy woman in an Infinity behind me who was right up my ass almost hit me when I had to stop.
When I finally safely made it to the restaurant and got out of my car, I said to Jessie, "What in hell was that all about?" She'd been behind me the whole time.
"Right?!" she said. It made me feel better that I had a witness. She said that she thought the woman who was trying to back up was probably stoned and just realized she'd missed the turn for the Kentucky Fried Chicken.
That made sense. We've all been there.

So we got our salad bars and August was a pistol but guess what? Little Guy wore his big boy underwear today and went through the whole outing without a problem. Of course we took him to the bathroom about five times but still...
I'm so proud of him.
"Big boy underwear are a lot more comfortable than diapers, aren't they?" I asked him.
He agreed that they were but didn't get that excited about it.
A woman at Costco asked him how he was doing and he said, "Pretty good," which is what he says, of course, and she thought that was the funniest, best thing she'd ever heard. She could not get over it. Truthfully, I'll be really sad when he stops using that particular phrase.
And Levon was a good boy although he has found his voice, as Jessie says, and when he gets upset he lets out a cry like a raptor which makes me laugh.

And that was my day pretty much except, oh yeah! I bought a pair of wireless headphones at Costco because I simply cannot buy another dongle nor do I ever want to say the word "dongle" again. And it's time to join the 21st century. So far I like them fine.

Another day, another walk, another trip to town, another lunch with some of my babies, and I did not die either on the walk or on the highway and so I guess I'd have to say that the day was pretty good, all things considered.

How was your day? Was it pretty good? I hope so.