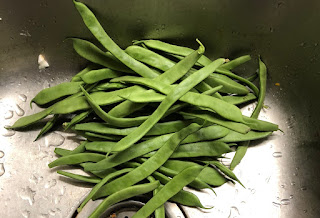 I've got my first pot of pole beans for the year coming to a simmer on the stove and I'm excited. I've never grown the Roma beans but Vergil's mama recommended them to me and she is one hell of a gardener. I picked a pretty good amount of them last night and today I picked another batch that was bigger than the first. Jessie and Vergil and the boys are coming out for supper and to collect the chicks which should be an interesting experience. We're going to have to wait until the sun goes down so they'll be in their sleep state but I'm here to tell you that chickens can come out of that state in a New York second if they're disturbed. But we shall do our best and tomorrow won't those chicks be surprised to wake up in a brand new coop?
Bless their hearts.
I'm excited because I'll finally be able to name mine. We've not been quite sure which birds Jessie was going to take so I have postponed the naming situation except for Nicey and the jungle fowl. Those four are going to be Hawkeye, Dearie, and two V- names because the black ones look just like vultures.
Maybe Vera and Vivian?

It is raining gently and it's cooled off and it's lovely here tonight. My walk this morning was pure torture because the humidity was terrible even though it wasn't as hot as it has been. I kept thinking, "Jesus, it IS the humidity and not the heat!" It was almost raining, every now and then a few drops would mist down upon me, and I swear the air was as filled with water as it could possibly be. The uphill part of Farm's Road about did me in but I got in my miles despite it all and lived to not only tell the tale but go out and weed a bit in the garden.
And then I took a nap.

Levon had his six-months check-up today. He is doing very well. He's not quite as long and a little bit heavier than August was at six months but as we all know, he is perfect. And I am sure that his folder at the doctor's office has BRILLIANT CHILD written on the front, just as all of my grandchildren's medical folders do. 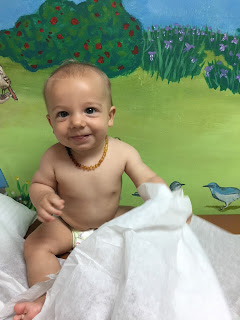 It sure is fun to see this baby-est baby growing and learning and showing us who he is. It's just magical every time with every kid and it's so crazy how fast it happens. Owen was this age about two weeks ago and yet, somehow, some way, he's now got such definite ideas about his own personal style and he acts sort of teenagery sometimes and he's falling in love with reading and he comes up to my chin and here comes Gibson who is like no other person on earth and, and, and...

Jessie showed me a video she'd taken of August and Levon the other day and I asked her to send it to me, which she did. The backstory is that August, who was lounging about in a car seat like a grown man with a beer belly in his La-Z-Boy recliner after work, had been encouraging Levon to crawl. When Jessie got out the phone to shoot a little of this brotherly love, he quit of course, so Jessie had to prompt him and it cracks me up, watching August's laissez-faire attitude about re-encouraging Levon and also, his absolute man behavior as he kicks back, crosses and uncrosses his legs, eats his snack and then gives forth a good, masculine burp.


Where did he learn this? Vergil has no La-Z-Boy. Perhaps August is modeling his Boppy. Who knows? Not me.