We Celebrate In Style 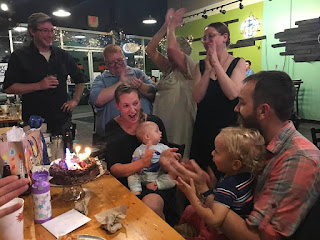 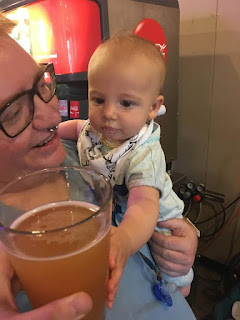 Hank is the best trivia guy. He has it all together with a picture round and an audio round and question rounds and, not to brag or anything, but Team Jessie's Groupies won.
We didn't really count because we had too many people to make up one team and also, well, Hank knew we were coming and there may or may not have been questions on childbirth practices throughout the ages and maybe the audio round featured songs with mandolins in them and well, we knew a lot of answers. There were a lot we didn't know, too, but come on- could YOU identify a picture of pickled kale stems?
Who would take the time and effort to pickle kale stems?
Having said that, I do have a lot of kale stems hanging about the garden.

Anyway, it was especially fun having Levon and Little Boppy partying with us. 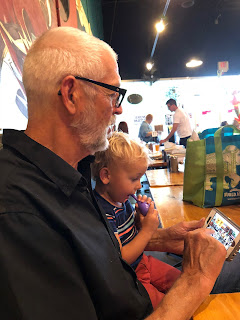 August got a little bit wild before it was all over, due to cake and the late hour but he hung in there. When I went to kiss him goodbye he told me that his name was "Boppy."
"Yes," I said. "Boppy's name is Curtis Glinden and your name is August Glinden."
"My name NOT Glinden," he said with great certainty. "My name Boppy."
"Okay," I told him. "I love you, Little Boppy," and he was satisfied.

The funny thing is, he's so much like his daddy that it's funny. If he's anything it's Little Vergil but if he wants to be called Little Boppy, Little Boppy we shall call him. And it sure does make Big Boppy happy. 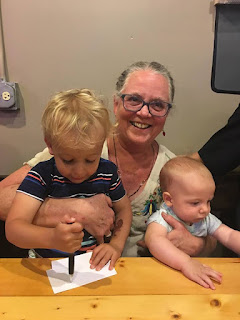 Everyone liked the cake and Jessie liked her presents. I got her a hippie gift assortment from World Market which included everything from pretty blue glasses to a package of heirloom lentils. May got her this butterfly. 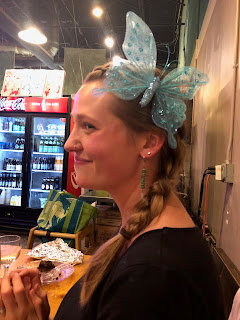 Among other things including a mermaid bottle opener which was awesome.

I think she had a good time.
I sure did. I looked around at our little group and I was so proud to be the mama, the mama-in-law, the grandmama. I'm sorry I don't have pictures of Lily or Rachel or our beloved Liz Sparks. It's a miracle I got the pictures I did and honestly, Rachel took some of those.
The best ones.

This morning I decided to walk a little unpaved road off the beautiful road I've been walking on. I drove it a few days ago to see if it looked like a good place to walk and it did, although there are quite a few hills and the one which is at the end of the road on my way back is pretty dang steep. So that's what I did and although my stupid doody-head pedometer app did it's stupid doody-head thing it does now and then and completely misrepresents my milage when I'm starting out, I'm sure I walked at least six miles. I took it slow and easy and just really enjoyed the sights. There are several bodies of water and peaceful woods and lovely homes and horse farms and trailer houses. A wide variety of things to look at and wonder about. 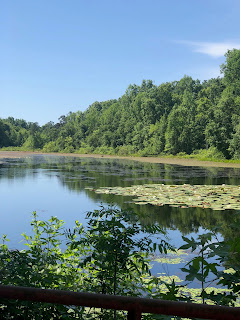 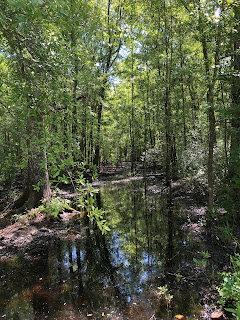 Exactly one car passed me and I saw one other person in a yard. A few dogs went crazy as I passed but they were well fenced and I said, "Hey, babies!" in as friendly a tone as I could muster and they didn't raise any ruckus when I made my return trip. The hill at the end was not easy but I am looking forward to climbing it with less and less effort.
Hopefully.
There are two loops off of that road which I can explore eventually and according to Google Earth they are as shady and as empty of human habitation as I could want.

I transferred the two Rhode Island Red chicks to the outside this morning, leaving only the Americaunas and Jessie's Australorp, Miss Poppy, in my bathroom and they shall be going out soon. 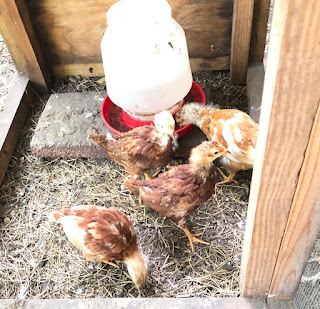 Here the reds are, reunited with their Dixie Rainbow sisters. They are all coming along nicely.

And so it goes in the Kingdom of Lloyd. I am feeling especially grateful and yes, okay...blessed tonight. I just am.