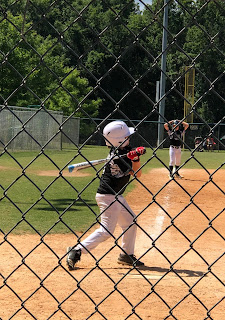 I am not going to complain about the weather. No, for May, the weather is remarkable. Cool enough to sleep at night and lovely in the mornings. I have not had the air conditioner on yet. This morning when we went to Owen's baseball game, we sat in the shade and it could not have been more pleasant.
However.
At this moment I have been doing stuff and part of that stuff was baking cookies which involved the oven and I just snapped at my husband and then I realized that I am just hot which makes me cranky especially when it's the sort of end-of-the-day-hot which has built up over the long afternoon and suddenly must announce itself with sweat and bitchiness. It got up into the upper eighties today so it's not completely surprising. If I keep my doors and windows mostly closed during the day, the night's coolness lingers longer than you'd think it would but by this time of the late afternoon, the cool has dissipated to be replaced with the heat. Not terrible heat, the way it will be, but enough to make me uncomfortable, especially if I'm cooking.
But now I'm sitting on the porch with a fan on me and I am fine but I tell you that the jasmine is about to kill me with its scent. It is honestly too much this year and although dying by scent of jasmine sounds like an ideal way to go, it really wouldn't be.

So yes. We went to Owen's baseball game this morning. Gibson had one first but I missed that. I got up pretty early to make the boys bacon and waffles before they had to leave the house at 8:30 with their Boppy, outfitted up and ready to play and I stayed behind to eat my own breakfast of an egg and toast. I am completely over pancakes or waffles or anything sweet for breakfast. I just can't do it anymore. But I got to the park in plenty of time to see Owen play and I will confess that this was his last game of the season and the first one I attended.
Bad Mermer.

I was amazed at how well these little folks played. Wasn't it just yesterday that Mr. Moon and Jason, Owen's coaches, had to constantly remind the children not to play in the dirt but to stand up and pay attention?
Now they're like, well, baseball players. That picture of Owen up there is him hitting a double. He's got a powerful swing and good aim to go with it. Or whatever it's called when you can hit the ball.
Don't ask me.
But I'm proud of him.
And Gibson spent most of Owen's game playing with his own carrot man in quiet pretending, sitting next to his mother. He's always done this and it blows me away. Remember when he'd play with the salt and pepper shakers when we'd go out? He creates these entire scenarios and has the objects act out whatever it is that his mind is creating. I love it. He may end up being the writer. A playwright, a screenwriter, a novelist. Who knows?
In the last few months, Owen has started gobbling up chapter books. He is reading the Diary of a Wimpy Kid series and can't get enough of them.
It's so interesting, watching these grandkids as they grow and develop. To see them become even more of themselves in this world with the activities they do and enjoy, their interests and questions and how they play. As St. Fred Rogers said, play is the work of childhood. I believe it.
I also believe it's an underrated and under-respected activity for adults too and I wish it weren't.
I know that when my husband and I go to Cozumel there is a lot of play involved and it is heavenly and it's so good for us. So why do we find it so hard to play at home? To spend our hours on things we may well enjoy such as carpentry for him or gardening for me but which is really and truly work if you think about it?
Because we're grown-ups, I guess.

Ah, well. All work and no play does indeed make Jack a dull boy and perhaps one day we will all reclaim our human right to continue playing until we die without feeling guilty about it. I remember when technology was going to be the thing that freed us all from the slavery of the work place but as I look around, I don't see many people enjoying themselves any more than they ever did. In fact, the opposite appears to be true. And instead of actual joyful, playful, relaxing activity, our leisure time is so often spent in tech-related activities. Facebook, Twitter, screen games, binge-watching...all that wonderful, time-sucking, soul-sucking stuff which never leaves us feeling better about anything.
Again, the opposite appears to be the truth of it.

Well, I'm not going to change the world or even myself tonight. But I am going to bake a chicken that I have marinating in yogurt and lemon juice and garlic and fresh oregano.
It'll hopefully be good but it probably won't be as good as those tacos I made last night with the Ortega crispy taco shells and the El Paso seasoning mix and the refried black beans and taco sauce and two kinds of salsa and avocados and onions and tomatoes and lettuce and cheese and sour cream.
Nah. Nothing's that good.