Blogoversary. No Cake, But There Are Chicken Pictures 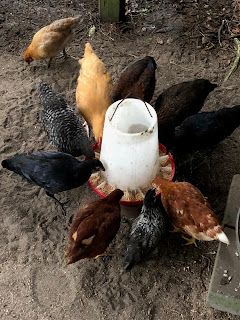 Another hot, muggy day. I'd like to say that the weather is "sultry" but I think that "practically unbearable" would be more accurately descriptive. I tried to wait until the rain passed before taking my walk because the radar showed that it would and I mostly did but by then it had heated up considerably and, well, I kept my eyes to the ground on the uphill parts and just did not stop which was more of an exercise in will than of body. And yes, I got rained on. Which was fine.

Blah, blah, blah. The fact is, no one is holding a gun to my head, forcing me to do this.

So in the picture above, starting with that reddish bird in the lower left hand corner of the circle (haha!) we have Nicey, and moving clockwise you see either Vera or Viv, then Babette, Apricot, Dearie, Hawkeye, Vera or Viv, Dixie, and Pansy. The one up at the top there is Eggy Tina.
I think. I sent this picture to Mr. Moon. 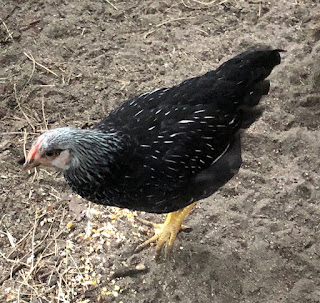 "Name your eagle!" I texted him.
He wrote back, "Big Daddy works unless it's a Big Momma."
We are going to go with Big Momma for now. Or, Big Mama, as I would spell it. Isn't she pretty?

For one more lagniappe chicken picture I give you this. 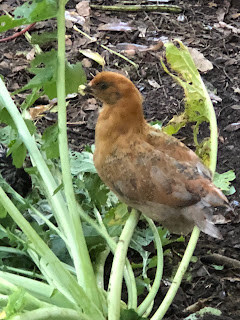 Mick is truly and noticeably walking better and has been more active today. I am so glad.
The little ones are soon going to be big enough to leave the coop and boy, do they want to! They rush the sliding door which I close before I let them out of their shelter in the morning, knowing somehow that this is the portal to the outside. Pansy is still so little that I'm a bit wary of letting them go out but it will happen before too long. It will be so interesting to see if any of them are roosters and claims them as his flock or if Mick will be the husband to them all. There is always a lot of social standing stuff to be worked out when new ones join an established flock. I seriously find it fascinating to watch personalities come out as every one finds their place in the whole.

I am actually following a recipe for tonight's supper. A black bean soup from the New York Times. It is not your traditional black bean soup but it seemed intriguing and so we shall test that out. Once again, I love the comments made on the recipe site, one woman did not even pretend to mess with the recipe that the NYT's presented but who gave her own basic recipe with the assurance that this is the way to make black bean soup. I also used a recipe for Cuban bread which is rising but I've never been able to fully succeed with that one. Mine never has the right combination of crunchy crust and soft insides but who knows? Perhaps tonight will be the night.

And so it goes, once again. Another day completely filled with the tiniest things, the many prosaic threads which, woven together, create the colorful tapestry which is my very own life. It is actually the eleventh anniversary of Blessourhearts and there is no way I can believe that.
As always, THANKS HANK!
Google assures me that I have published 7, 541 posts and I don't doubt that. As I said the other day, I talk too much.
Well, la-di-dah.
I love this blog with all of my heart and I love every one of you who's ever come here and found something of worth. If there is such a thing as a room of one's own, I've found it here.
And in doing so, I've found a community which nourishes, delights, amazes, astounds, comforts, and educates me.
I have found heart-sisters and heart-brothers, too. In times of joy, my joy has been shared. In times of despair, I have found help.
Pretty crazy.
Pretty precious.
Pretty much a miracle.