I Must Be Feeling Very Deep South Tonight 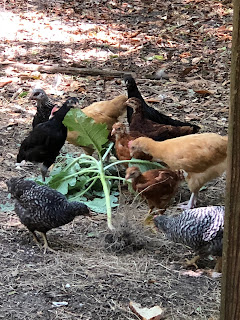 I just love watching the chicks belly up to the collard bar when I bring in a done-for plant. They love those things. They're getting bigger but their growth curve has slowed a bit, as it does at this stage. Still, they are outgrowing their night-time sleeping coop and I don't have the energy right now to try and get them to move over to the other shelter available for them which will require not only shutting their current roosting area but also figuring out how to entice them into the new one. Chickens are creatures of habit without doubt. I have a feeling that if I closed that small coop and put food and water in the other box, I'd go out at dark to find them all huddled around their accustomed bed place, completely mystified as to why they could not gain access.

The plan was for Jessie and Vergil's coop to be done enough by tomorrow to move her batch over but I just got a text from her saying that this would probably not be case which is fine. I'm not anxious about it. They'll move when all is ready and no big deal. Mr. Moon's been over there most of the day helping and I know that Jessie's been helping too. She's so appreciative of the guys' efforts. She says that she first started really looking upon Vergil with eyes of love when he showed her the chicken coop he'd built for his grandma and I think that's a very wise criteria for a future mate.
Not only the ability to build something but also, the willingness to build something for a grandparent.
And as we all know, Vergil has proven to be true in both the carpentry and caring regards and she will get her little flock soon. She is going to enjoy keeping chickens so much and I can just feel Kathleen beaming at what she started.

This morning when I got up, the children were already texting each other and Mr. Moon about the plan for Mother's Day. This was stressful for us all. I know how it feels to want to show someone that you love and appreciate them but there are so many factors involved. Since so many of us have worked in the service industry, we know what Mother's Day is like for restaurants and we would all like to avoid that but no one really wants to cook for a group of the size of our family.

I finally suggested that everyone just come on out and bring stuff to make sandwiches and that I would make iced tea and potato salad and that is what is going to happen. Which is sort of exciting! How southern!
So I went to the store to buy potatoes and other stuff and came home and made potato salad and also cole slaw and somehow I have kept myself busy and occupied all day long.
I have had to restrain myself from starting S-Town again from the beginning but have listened to the first episode of the Serial podcast which was fine but I'm afraid that the bar set on S-Town was way too high and I'm not sure I'll ever listen to anything as fine as that again. And yesterday, I totally forgot to give credit to Brian Reed who was the host and producer, and all of the others on the crew who helped shape and put that podcast together. It is a simply amazing example of what true hard work, dedication, insane mad talent and skill, not to mention what can only be love, can do.

It got hotter than hell today. Up into the nineties and here we are- summer has finally arrived in all of its burning implications. My green beans will start being ready to pick by tomorrow I figure, and we may get some rain tomorrow or Monday or Tuesday. We got a few drops today and I mean that literally- a few drops. My clothes were on the line and I gathered them up and stuck them in the dryer for about ten minutes and they probably didn't even need it. This is the sort of weather where you can wait until three o'clock in the afternoon to hang even your towels and jeans and they'll still get dry before the sun goes down and if a little rain hits them, it'll steam right out. As I was unpinning the clothes and throwing them in the laundry basket I started thinking about global warming and how a lot of people are going to be real surprised when their normally temperate temperatures start creeping up into the hundreds and above, especially if there's no air-conditioning.
It ain't gonna be pretty and in fact, is going to be very sweaty and very miserable and human production is going to go way down.
But hey! Let's not worry about that right now, okay?
I got AC and I got ice from the freezer in my vodka tonic and I got potato salad chillin' in the Fridge. I got internet and a TV that can hook up to the WiFi and I got sprinklers that can water my green beans when the rain doesn't come.
Lord help us all.

What are you doing for Mother's Day? I'd love to know.