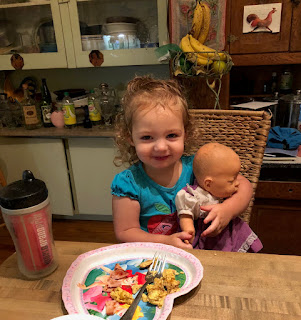 Ms. Magnolia June was happy to come and play at Mer's house today. First thing she wanted to do was to go wake up the dollies. Which she did. They were sleeping right where she'd left them the last time she visited. We had some eggs and toast for our breakfast which we both enjoyed and we walked through the rain to go let the chickens out. When it cleared some, she wanted to go feed the goats, so we did. 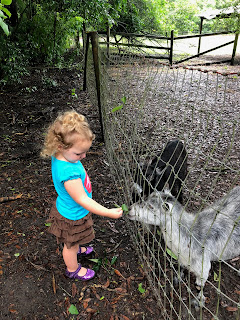 I wish I had a nickel for every picture of a grandchild feeding that particular goat I've posted on this blog. Maggie rubbed its little nose and shrieked with delight.
This was unlike when she tried to pat Maurice who scratched her arm and made her cry. Which did not last long. It wasn't much of a scratch. But JESUS, Maurice! What the hell? Jack, of course let her pet him and snuggled up with us and purred because he's a normal cat.
Well, normal for cats.
The other night Jack did something that I'm still sort of boggling about. Before Mr. Moon comes to bed, Jack and I get all cozy in the bed and I read and he tries to get between me and my book and he taps my face or my arm with his paw which can be annoying but I tolerate it because he just wants attention and don't we all?
Often, when my husband gets in bed with us, we spend a little time telling Jack how handsome he is and we pat his head and stroke his back and we were doing this the other night when I said, "Jack, show Daddy what you do when you want my attention when I'm reading."
First of all, yes, we call each other "mommy" and "daddy" to the cats and that's so silly but we do it. I don't know why. We just do.
So, Jack sits there for a minute, thinking about things, I would assume, and then he carefully reaches out his paw and taps me on the mouth a few times to illustrate what it is he does when he wants my attention.
We were both rather boggled. I mean, he was already getting a lot of attention from us and it seriously appeared as if he was just doing what I'd asked him to do.
I have a theory that cats actually understand spoken language as well as any human but of course they do not want us to know that. I also think they can talk and I have actually heard a cat talk and I don't mean I mistook a meow for anything else.
No. There were words.
And every now and then a cat will let slip that they understand you and once in a very, very long while one will speak. But of course they know that any human who reports these things is going to be laughed at or disbelieved or accused of drunkenness or perhaps mental illness so they blow our minds, pretend it didn't happen, and laugh at us behind our backs.

Oh my goodness! It is pouring rain here right now and a huge crack of thunder just announced that we are not done with the aftereffects of Alberto yet. I can't believe how tired this weather makes me. After Maggie left, it was all I could do to tidy up and eat my lunch before I had to lay down and take a little nap. Maggie certainly hadn't worn me out. She was a sweet girl and not very demanding and she wasn't here for very long. But I could hardly keep my eyes open.
But I'm not tired of the rain yet. It soothes and comforts me. It reassures me in ways I can't describe. It restores my soul, even as it restores the green earth and the blue rivers.

Here's a picture of a few of the chicks, out in the world in between showers. 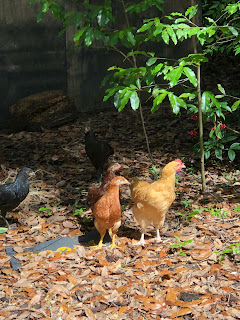 It may well be Apricot (the bird on the right) who is the rooster. We shall see.

And by the way- where is Melania Trump?

I have three theories. They are as follows:

1. She's left the Donald and has moved into a new apartment but they're just not telling anyone.
2. Whatever medical issue she had was far more serious than they are letting on.
3. She had plastic surgery and is waiting for the bruises to heal.

What do you think? Am I petty for even wondering?

I have no idea but I do know that I have a darling granddaughter and she makes me laugh. Especially when she's doing something she knows I wouldn't approve of so she points a pudgy little finger at me and says, "You leave now."
That girl. She's got a mind of her own and I am in awe of it.