A Rite Of Passage 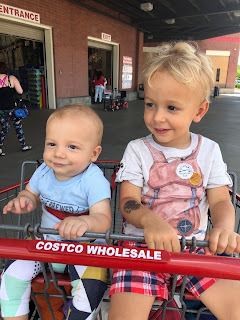 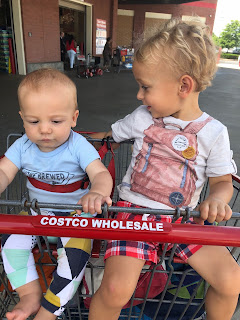 So much more to see from the vantage point of the seat in the cart than from his car seat in the basket of the cart or even from the wrap his mama puts him in where his view is basically her chest. 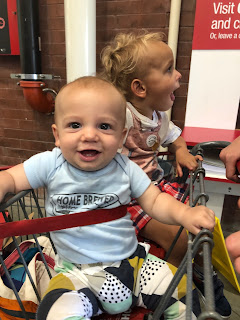 Can you see those two perfect little teeth?

But it occurs to me that of course a baby's desire to see more of what's going on in the world develops right along with his or her ability to be in a position to do that. This is so obvious that it goes without saying but still, I don't think I've ever really put those two things together like that in my mind.
I'm slow.
I realize that.

So we had a good time at Costco and August was all about his Mer today. He wanted me to push the cart and I did. When I got a sample of some chicken stir fry thing he went a little nuts though.
"Don't eat it! NO!" he said. I'm not sure why he felt so negatively about a tiny cupful of rice and chicken and vegetables but he did. At least when it came to me ingesting it.
I, however, was starving and said, "I'll just eat it over here where you can't see me," and ducked behind a display of something.
It was pretty delicious and I haven't died yet so...
August always wants to see the giant frozen crabs at Costco. This is a thing we do every time we go. We look at those crab legs which are bigger than his legs and the absolutely enormous Alaskan Crabs which sell for almost $300 apiece.
Do people really buy those? They must. They should sample that shit.

When we checked out, the lady who unloaded our cart was the same lady who thinks August is the funniest guy in the world because when she asks him how he is, he always says, "Pretty good." She asked him today and he told her he was pretty good and she laughed and laughed and said, "I'm so glad you never change!"
August likes her. Last time we saw her he wanted to go back and see that "sweet lady."

So it was a good time at the Costco as almost always and I was glad because I've been a bit down today. One of those days where the tears are just right there behind your eyes, waiting to gush at any stray word which triggers their release. Feeling as if my life is as meaningless as a vestigial tail although not nearly as interesting.

Well. I don't need to dwell on that one.

Today was Owen and Gibson's last day of school for the year and I am looking forward to trips to the Wacissa and lunches at Japanica with them. I need to see more of those boys. I need to figure out some projects I can do with them that will keep them interested. It's not as easy as the old days when they were completely happy to sit on the stairs and have me throw a big, soft ball to them and have them throw it back while we listened to the Rolling Stones.
Oh. Those were the days, my friend.

This is what it looked like when I took my walk this morning. Heat and moisture. I did get out a little earlier but it was only the slightest bit less torturous.

You should see the mosquitoes which have hatched and are hungry since the storm.
No. Not really. No one should have to see this many mosquitoes. Deet is our friend. And don't suggest anything like lavender oil because that stuff does not work for mosquitoes who are this desperate to suck blood. Trust me on this.