It is well and truly May's birthday today and I spoke with her this morning before she headed off to St. Augustine. This is the birthday she is turning forty and how I, a forty-seven year old woman (in my own head) have a forty-year old child is beyond me and let's not mention that Hank is going to turn 42 in a few weeks.
But.
I told her what I'd written on her card yesterday which is that I honestly think that a woman's forties are her best decade when she is at the peak of her powers and her glory.
She said that when she woke up this morning she felt relieved. That here it was and let's see what happens now.
Amen.
I love the post I wrote about her birth three years ago and you can read that here, if you never have. I look back on the memories of the day she was born and I can't even believe that I was ever twenty-three years old, giving birth to my second child and already the mother of an almost two-year old. But I was and May was my newborn baby and I was starry-eyed in wonder and bliss and as happy as a human woman can be, having just given birth and thus, having assisted in the process of a person coming into being, from that world to this.
That universe to this?
Whatever. I had been the portal and was now infinitely rewarded with this precious baby, this unique and wonderful life, my May baby.

Of course I've been thinking about all of that all day long and it has been a long day for me. My walks are just getting almost too hard to continue with at this pace and length in this heat and humidity. Instead of feeling as if I am getting stronger, I feel as if I am doing the opposite, being wimpier every day as I climb the hills and wish for nothing more than it all to be over with. And it is hard to get to sleep at night. My left leg bothers me from thigh to foot and it takes a long, long time to get comfortable enough to fall asleep and if I do fall asleep, I constantly wake up, in another sort of discomfort. After my walk I have little energy left for the rest of the day and that's not good. And forget naps- again, I can't get comfortable.
And if that doesn't suck, I don't know what does.
So why am I doing this?
Oh hell. I have no idea. Because I'm a stubborn old woman, I suppose. And because I can.

Anyway, so I took my walk and I've tried my best to be somewhat productive for the rest of the day. I cut out a dress for Ms. Maggie June and I tried out the new iron I bought myself at Costco yesterday as a present (haha! just kidding, no, not really kidding) and it had parts made of the sort of crap plastic that you might see toys made out of at the Dollar Store and it appeared not to be designed for human use so fuck it- I'll be taking that back. I also mopped the kitchen and microscopic laundry space and teeny tiny bathroom. It's been so long since I've done that that Maurice was a bit worried and disconcerted. 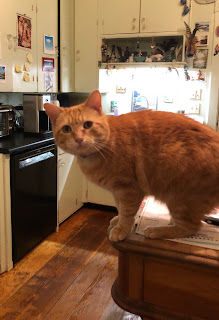 What the hell, human?

There have been no more chicken incidents although I have decided to let the littles out of the coop tomorrow. I think they are big enough and ready. They literally hurl themselves against the door which I've been keeping closed which allows access from the hen house and outside to the coop. How do they know that this is how to get out? I do not know but when they aren't hurling, they are huddling against it. They want to join the big world of scratching and hunting and exploring and dirt-napping and sunbathing and it's just time.
I dreamed last night that I was taking care of a bunch of baby chicks and I had a habitat to put them in but I kept forgetting that they weren't fish and so I would fill the habitat with water and then panic, remembering that they were chicks and draining the water but then cats kept coming in to get them and I had to wrestle babies away from cat paws and I couldn't find anything to put over the shelter to keep the cats out and, well, I guess I'm having a little anxiety about their safety.
What a strange and wonderful thing evolution is which gives us all the innate sense that we need to protect babies, whether our own or others in the human sense and also chicks and kittens and puppies and wild birds and, and, and...
Not to mention how some of us feel about seedlings.
And can I just say that interspecies mothering is one of my very favorite things about life on earth? 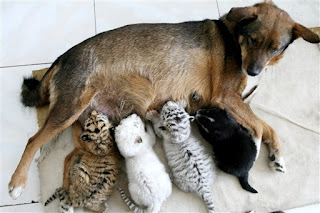 And then there's this. 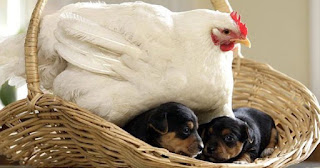 We just can't help it.

OH! It's Bob Dylan's birthday today too. He is seventy-seven. Let's wish him all the best and like all of my favorite musicians who are still alive, he's still touring, still playing, still being no one but himself, doing what he was put here on earth to do.

Okay. I'm tired. I swear to you that I am more exhausted right now than I was on the night of May's birth.
Age'll do that to you. Also, a lack of hormones.
Jeez.