It's Hard To Beat A Two-Turtle Day 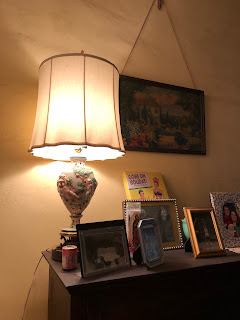 The lamp is home! And I had such a good time getting it.
It's been a good day in general. When I was having my coffee on the porch, I heard the unmistakable sound of a teenaged rooster trying out his crowing. The littles were all still in their shelter so I'm not sure which one it was but I'm thinking it might be Big Daddy because as soon as I let them out he ran straight for the door without stopping to eat a morsel while the rest of the young chicks arranged themselves around the feeder the way they do in the morning as if they had never eaten in their lives.

Mr. Moon said that he would go with me to Monticello today to buy the lamp and I was grateful because not only would that be fun but I also wanted to buy a little chest of drawers I saw yesterday. It wasn't a superior piece of furniture but would be nice in a bathroom or on a porch. So we drove back to the little town and went into Wag the Dog and wouldn't you know the dresser was already sold but the lamp was still there and I claimed it and it was mine.

We went to a real antique store and wandered around but nothing caught our eye that was priced anywhere near where we would have considered buying. What's up with these places? I looked at a nice smallish Jadeite bowl that they were asking forty-nine dollars for which is ridiculous and I bet you any amount of money that thing will still be there collecting dust a year from now. But it was pleasant to wander around and the upstairs part of the shop is the best. It feels...haunted. If not by the rooms themselves, than by the objects resting there. 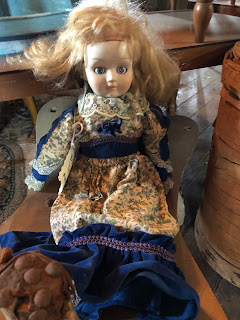 It really is a beautiful space, though. Here's the room facing the street where light pours in through the windows. 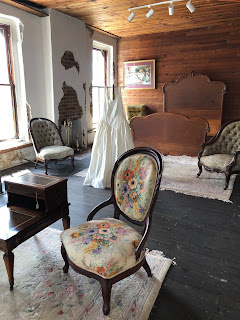 Whenever I see those massive wooden headboards I always think that if I had one I would constantly be afraid that it would fall on me either in my sleep or during love making and kill me dead.
Although dying during either of those activities would not be so bad, I suppose.

We ate our lunch at a different place than the one Jessie and I ate at yesterday. This one is more down home and diner-like with no pretensions except for in the name which includes the word "eatery." When did "eatery" become a word? When did "conversate" become a word? When did "read" become a noun? I especially hate that one.
"It was a really good read."
What's next? "We had a really enjoyable feed"?
That's probably already in use.
Okay. Sorry for the senseless segue.

But the place we ate had fried EVERYTHING! Almost. Fried dill pickles and fried green tomatoes for sure. Those were on the list of the premium side orders which you could get with your sandwich for an extra dollar. Mr. Moon and I both got chicken salad salads (yes, I had chicken salad yesterday and no, I can't get enough chicken salad) which was a big glob of chicken salad on some nice greens, period, the end. With dressing.
It wasn't bad. It was, as August would have said, "Pretty good," although on our way home I declared that next time, fuck it, I'm just getting something fried.

We stopped at the Winn Dixie on the way home because I needed to pick up a few things. I'd asked Mr. Moon what he wanted for supper and he said "hot dogs" which is hysterical because we NEVER eat hotdogs. Well, I think he might buy one at Lowe's now and then but, seriously?
He also wanted baked beans and potato chips. I can't even remember the last time there were potato chips in this house.
But, that's what we're having. I got the best hot dogs the Winn Dixie had to offer as well as the best hot dog buns (Pepperidge Farm). I got canned chili sauce for hot dogs, I got Chow-Chow. I got a can of baked beans. And since we both ate about half a bushel of salad greens for lunch, I don't feel a lot of guilt about not making a real salad but I am going to make a carrot and raisin salad and I guess that's real.
Enough.
Real enough.

On the trip home we saw this. 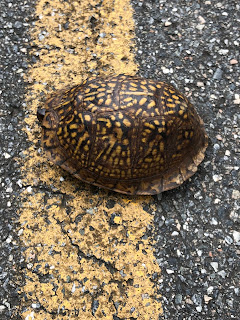 Prettiest little Florida box turtle you ever saw, seemingly paralyzed on the center line. We turned around and pulled off the road and took it to the side it had been heading before he (she?) became confused or scared or whatever. 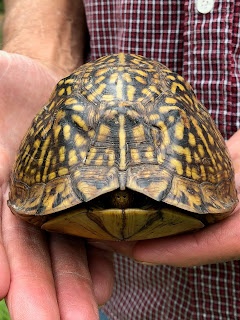 That's its little nose peaking out.

And THEN, on another road, we saw another Florida box turtle crossing the road.
Pull over. Check it out.
This little guy was not paralyzed and by the time we got to it, he'd made his way safely into the weeds. He'd gotten rained on a little bit so his shell was nice and shiny and lovely. 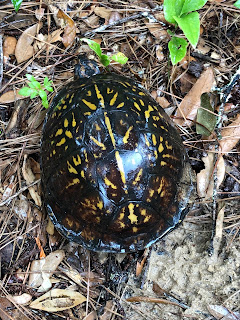 I guess it's mating season or something. This may sound ridiculous, but it was thrilling for me to have two such encounters in one day.

And then, to top it all off, I got a row of black-eyed peas and a row of okra planted. I'm so glad. What a relief! Since we're about to get a whole bunch of rain, it was good timing.
There was a lot more I could have done in the garden but I'm not feeling that great so I stopped at those two rows and came in and took a shower. While I was taking that shower I discovered a tick embedded in one of my bosoms. Really? In my own personal breast? Indeed it was.
I hate those motherfuckers.

But it's been a full day and the news about Ireland giving women the ability to control their own bodies and lives is thrilling. I have been reading the "In Her Shoes" posts on Facebook which Jo has shared which have horrified, angered, and touched me so deeply. I am so proud of Ireland for standing up to the powerful Catholic church which has held that country in such tight chains for so long. First, same-sex marriage and now this! 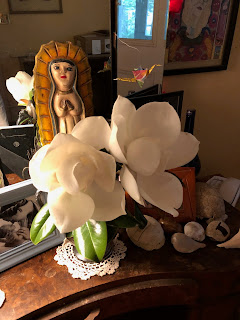 If you could only smell my hallway...