Not Necessarily In This Order 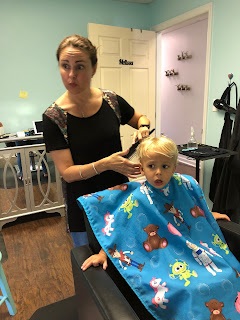 August was going to get his hair cut and then he wasn't going to get his hair cut and then he did get his hair cut. It was absolutely no big deal- he could if he wanted to but no one would be upset in the least if he didn't. His mama and daddy have given him a few trims and he's always been cool with that but he just wasn't sure about Melissa.
Until of course, he got to really know her a little better at which point she could have given him a tattoo and he probably would have let her. That's just the way she is.
Jessie got her hair cut and I didn't even get one picture! What's wrong with me? I have Grandmother Disease, I guess. 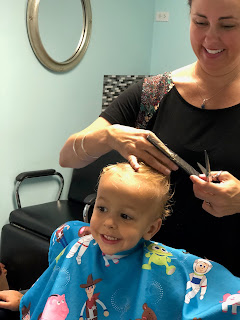 This was when August's mama asked him to smile. 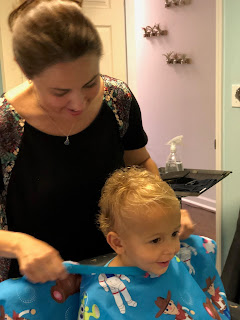 It's like all of a sudden, the kid has curls. And yes, it's humid as hell but it's been humid before. Anyway, he's a handsome little dude and he was quite pleased with his haircut. And with the whole experience, actually. Melissa patiently showed him how the clippers worked and the blow dryer and let him try them out too. This was right up his alley, as were the dinosaurs she keeps for kids to play with. And the monkey. And the silver rat. She's our kind of people. Actually, she IS our people.

Levon played happily on the floor most of the time and I don't think he got too much hair on him. He's cutting new teeth and you almost need a mop to follow him around with. Poor little guy. He's hanging in there, though.

Jessie's new chicken coop is just a beautiful thing. It smells so good of fresh pine shavings and freshly cut lumber, and those baby chicks are happy as can be over there. I think Jessie's in heaven. The chick retrieval went very smoothly last night and August helped by holding a flashlight. She's going to name them in alphabetical order with food names. As in, one is already named Apple. Get back, Gwyneth Paltrow! She's going to name one Miss Eggy-Geena after our original Miss Eggy-Tina and I am thinking that I might name our bald-eagle-looking Wyandotte Eggy Tina II because that name is just too good to let go.
I hate the phrase, "It's all good," but in this case, with this sweet chick and coop situation, it is.
It is all very, very good. Those chicks won the lottery.

We did get rain last night and this morning and I went out in the drizzle and walked two miles which is nothing but I just had to at least feel as if I'd tried. I put my phone in a baggie and I got soaked but I don't know which I got wet with worst- the rain or my sweat. Sweating in the rain just ain't right.
Oh well. I'm crazy. We are all aware of that.

I was saddened to hear of Tom Wolfe's passing. He was one of a kind and had a huge influence on American writing, both in the journalistic and fictional sense. I didn't love all of his books but I sure did love some of them. And what a beautiful sartorial sense of fashion he had!

In other news, Keith Richards is saying that America has got to get rid of Donald Trump.
Yes. Yes Keith, you are right. Now how do we accomplish that? If you'd taken care of business in 1989 with your trusty blade, we wouldn't be having this problem but you'd be in jail and that just isn't an option.
This whole thing with Melania undergoing surgery for a benign kidney issue is weird. I mean, it's quite possible this is true but has it occurred to you that she's faking a medical issue and a hospital stay so that she can just drop out of sight and go into hiding somewhere so she doesn't have to deal with her husband?
Yeah, probably not.
I hope she's okay. I mean, I don't really feel sorry for the woman. She chose to marry that shithead but still, she's a human being.

And one more thing- I really want to read Michael Pollen's new book. 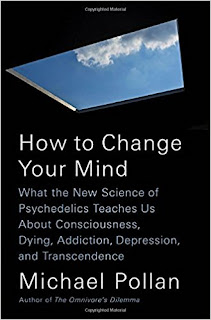 Which somehow relates to Tom Wolfe's Electric Kool Aid Acid Test. I know it does because every time I ever expanded my mind with psychedelics, it became absolutely clear to me that ALL IS ONE.
How richly ironic it will be when it is common knowledge that cannabis and psilocybin, along with other psychotropic substances, are keys to unlocking the secrets of the mind AND the brain and can be powerful medicines.