The Tour Of Coop And Garden 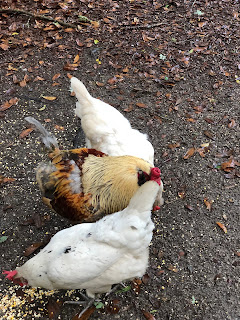 Went out this morning, a little afraid of what I'd find in the chicken coop. Last night Mr. Moon held Mick and I swabbed him good with the goop I'd made of comfrey ointment, antibiotic cream, and golden seal. He did not fight us or struggle and we set him gently up in the roost. He had not been able to fly up on his own. His ladies were agitated. They know when something is very wrong. Death upsets them. Injuries do too. And of course, they had been threatened.
But this morning I found him in the coop, walking very, very slowly but eating and moving about a little bit. I thought I'd just let him hang out in the coop all day with the babies but when his hens started clucking for him, he wanted to join them and so I let him. It would be harder on him, I think, to know that his girls were untended than it was to let him roam with them the best he could.

And I've stayed here all day, keeping an eye on things. I sat on the porch this morning with the rain falling down and watched a few videos of the Stones' concert in Dublin yesterday. Ah, the old boys. I seriously do not think they will quit until one of them falls dead onstage and if it's Keith, I bet he'll have a smile on his face.
Of course that won't happen for another forty years or so.
Mick's face is ravaged, as all of their faces are except for Charlie Watts who rarely changes expression and who has lived a tamer life than the rest, I believe, but Mick has the body of a fourteen year old. That little tushy is a thing of wonder and his ability to still dance and strut and sing and run and skip is truly unbelievable. I mean, he's a great grandfather. He'll be 75 in July.
So that was a pleasant morning and I determined that I would be consciously lazy today but then it quit raining and something clicked inside of me and I started laundry and hung out sheets and then got in the garden and harvested carrots and did some weeding. 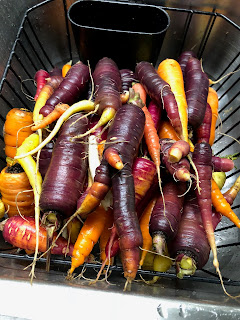 I brought all of the carrots in and scrubbed them gently. Can you see the boy carrot there?

It was hot and it was steamy but I got back outside and pulled the shallots and the onions and oh, god. I have so many shallots. 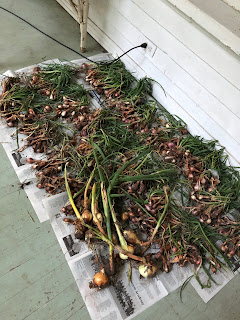 What am I going to do with all of those shallots?
I have no idea. But there they are, resting on the porch to dry and cure along with some onions.

And then I went BACK out and picked green beans and a few of the last remaining sugar snap peas. 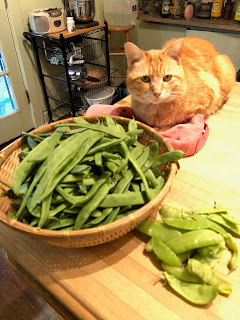 Maurice is unimpressed, as always.

And that's been my day, this day which has seen yet another tragedy involving school children and guns.
You know what? "Tragedy" does not begin to be the right word for these horrific occurrences. And to be honest with you, I feel completely hopeless.
To the point where I have nothing to say.
My words are as useless as hopes and prayers.

And so I'm going to cook some grouper tonight and some of the vegetables I pulled from the earth today and I'm going to put that salve on my rooster's butt tonight and make sure that all of the chickens are as safe as they can be. I am going to sleep on my clean sheets with my husband and tomorrow night August is going to stay with us.
What else can I do?

I'd say Happy Friday but, hey. You know.