Such A Small Life But So Rich In Some Ways This is a house I pass on my walk if I go down Farms Road which is an offshoot of White House Road which is where I've been walking. Farms Road is the one that leads downhill, downhill, downhill almost all the way to where it ends which is right across the railroad tracks which lead west eventually to my back yard and then on to Jacksonville. Or New Orleans, depending on which way you are going. The house is nice, yes, but I took the picture because this is where I saw three does effortlessly leap that board fence and then...oh my heart...three young'uns following behind, trying to keep up with their mamas. They make no noise, no noise at all, as if they are an illusion in my mind. Later on, as I was walking back up the road which is uphill, uphill, uphill, I saw four more deer cross right in front of me, as silent as the others had been, to vanish into the green leafed woods.
Ah. Even as I hate those hills, I love the walk. Ponds and trees and the sound of frogs and water birds, and the swell of cricket song.

I keep wondering why I have suddenly decided to take on these extra miles but I think it has something to do with simply being alone with my own stride, breath, effort, and of course the book I am listening to. I would love to say that it feels good to push myself and I suppose it does but honestly, after the first five miles, it is mostly a disassociation between mind and body, each step one bit closer to where my car is parked in the shade, my Yeti cup filled with ice water, waiting for me to return. This becomes more and more true as the temperatures rise and I need to get up earlier, get started earlier before the sun's heat reaches its zenith.

Jessie and her boys came out today to visit the chickens and just hang out. I love how Levon (who turned six months old today!) looks around so intently at my kitchen, checking out all of the colorful things hanging from the walls and on top of the kitchen hutch. Today Jessie showed him around.
"That's an angel, and that's the Virgin of Guadalupe, and those are aprons, and those are Christmas ornaments..."
Etc.
He is highly amused by it all, as all children seem to be.
I made us tuna salad sandwiches today with a hardboiled egg and celery and onions and pickle relish and tomatoes and mayonnaise. We ate on the porch, as we always do and Levon relaxed in the walker playing with toys and then August joined him and I got this sweet picture. 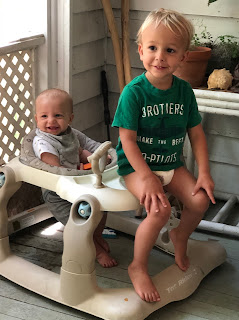 We spent a lot of time with the chicks and also laid on my bed with the fan on us, me reading books to August.
"Aren't you tired of this one?" I asked as he brought me A Fish Out of Water which we have probably read thirty times at least.
"No," he said, and I read it again with all of the voices and inflections and he listened carefully as he always does. Levon got some milk and then laid on his back and chewed on another book for a good long while and it was pure pleasure.

After they left I cleaned up some and took a little nap. I needed it and it restored me. Boppy is at a ballgame of Owen's. I had thought that last Saturday's game was the last one but I was wrong. I feel a bit guilty for not attending but not very. My joints all hurt and sitting for that long on the bleachers would have been somewhat torturous and I will see all of those children tomorrow as I am taking up the slack a little for Lily and Jason whose schedules overlap.

I'm about to go steam some peas and carrots and potatoes for my supper tonight and I think I'll make a little cream sauce to go on them. As I was turning the sprinklers on after I picked the peas, a little boy from the church next door imitated one of the neighborhood roosters and I said hello to him and he said hello back.
"Would you like a fresh pea from my garden?" I asked him.
"I guess so," he said.
"It's a sugar snap pea and it is very sweet and you can eat the whole thing," I said.
There were only a few feet between us but two lines of fence and some briars and cherry laurel bushes.
"I'll have to throw it to you," I said. And I did and he got the pea and I said, "Try it."
He crunched into it.
"What do you think?" I asked him.
"It tastes like plant," he said.
I laughed. "That's what my grandson said!" I told him.
He imitated the rooster again and I said, "Have a nice evening!" and I hope he does.