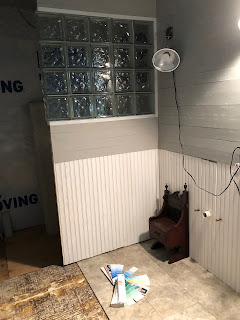 Mr. Moon's bathroom is coming right along. Yesterday he set the glass brick and as you can see, he's trying to figure out wall colors. He's been working so hard on this project. Sometimes I find him just sitting in a chair in there.
"I'm thinking," he says. "I have to sit down to think."
He thinks and then he DOES. He amazes me.

Today, however, he went over to Jessie and Vergil's to help with the chicken coop building. I know that Jessie is so eager to take her chickens home. I was invited to come too to just hang out but I have been in a foul and dark Sunday mood and sometimes, when that mood is upon me, I do tasks which I generally avoid because I hate them but if I'm already in a hateful mood, I might as well get them done.
Or something like that.

I did some weeding first, which I do not hate unless it is stinkin' hot and it was that today. When I could take no more of that I cleaned the shower in my own bathroom which had visible mildew in many of the spaces between tiles. I applied various toxic chemicals and scrubbed with everything from sponges to toothbrushes to my very strong thumbnail and finally used some clingy, bleachy toilet bowl gel cleaner which works better than anything.
So that was super fun and now that whole end of the house smells as if you could safely perform surgery in there.

On to the back porch which is where I spend half my life and which was horrible bad dirty and filthy and dusty and so forth. I didn't really clean it nearly as well as I should have but I did make it look better and tidier and got rid of some of the spider webs and accumulated dead bugs and what I suppose is spider poop since it's right under the spider webs. And I put a clean tablecloth on the table which makes everything look better.
Right?

The whole time I was cleaning and weeding and trash-taking and tidying, I was practically seething with resentment. Mostly towards myself in that I have no idea why I do this to myself, why I base my very own identity of self-worth on doing these tasks I assign myself and always fall short on because honestly, I do not like to clean at all and this is a large house for one person to take care of and although I do enjoy gardening and yard work, this is a big ass yard and I have a fairly large garden.
Was I a Mormon housewife in my last incarnation?
So I enjoy beating myself up for beating myself up, I suppose.
I swear- if I were fifteen years younger, I would swear I was about to start my period. That's how visceral and illogical my feelings are today.

Okay. Let's talk about Miranda July's novel The First Bad Man. Have any of you read it? I just finished listening to it last night and it was read by Ms. July which is always good because no one knows how to interpret the written word like the person who wrote the words. The reviews of it were very mixed, especially the short ones on Goodreads which I usually consult before I download an audio book. And I loved the beginning of it and then in the middle I decided it was just too weird and I didn't like it and then as the second half really got rolling, it sort of blew me away.
So basically, I'd love to hear from others who have read it to hear what they think.
And would I recommend it?
Ummmm...
Good question.
Let's just say that if graphic sex writing, hugely unlikeable characters, and weird girl-fighting upset you, this book is not for you.
I tell you what though- I am not going to have to try and remember whether or not I've listened to this one which frequently happens to me when I do a search for a new audio book from the library.
Nope.
Not going to forget.

Another thing I wanted to discuss was the fact that I can no longer seem to comment on Word Press posts. I was able to do that by signing into them with Facebook but now I get an error message which says that the URL was too long.
Perhaps this will be sorted out soon. I hope so.
Yolie, who has a Word Press blog, wrote recently about helping her mother "sort her shit." Yolie is supremely qualified for this task in that she and her husband, the Tearful Dishwasher, are now living a beautifully nomadic life in an Airstream and have pared their possessions down to very, very little.
As she so beautifully says in her post, she understands her mother's reluctance to let things go which she may need some day down the road and oh, how I can understand that!
And yet, there are so many other things which seem almost impossible to let go that we absolutely KNOW we will never need again. And for me, these things are mostly clothing.
I read a little piece in the New Yorker lately about an artist, and his mother was in the article too and she is the curator of a museum and she said something that has made me understand myself so much better.
What she said is that the things in our closets are like the displays in a museum. Each article of clothing holds memories of times and experiences in our lives so that the closet becomes almost our own personal museum.
And isn't this true?
How do I get rid of the dress I bought for one of my daughter's weddings which is not only beautiful, but which makes me remember the day I wore it and how happy we were and how Lis made the wedding cake and the groom's cake and Liz decorated and Jason danced to Billy Jean and how beautiful Jason and Lily were as they made their promises to each other and on and on and on?
And besides- I felt lovely in that dress.
But even the most prosaic of garments can bring up a time in my life which yes, has passed, but I don't want to forget.
The cargo shorts that I'll never wear again but which fit me when I was younger and felt strong and confident in my own body, even as the mother of four?
Just a damn pair of Gap men's cargo shorts but oh...what they represent.
It can be harder to get rid of a garment I bought at Goodwill which holds good and positive memories than it is to get rid of a garment I paid full price for but only wore a few times and never had a good time in.
Absolutely.

But of course, this only covers clothing, mostly, and we hold on to many things which have no intrinsic value at all but are, in fact, part of the Museum of Me.
That doesn't mean we should keep all of them but it definitely helps when it comes to deciding to toss shit that we really don't associate with anything except the fact that we "may" need it in some future time we really can't even imagine.

Here are a few videos I received today.

I believe that August calls himself Little MerMer when he is chewing gum because I chew gum and he has always been fascinated by that. Otherwise, he is definitely still Little Boppy.


This is a song which Maggie may have created herself about beans. No one recognizes it so it's quite possible that it's a Maggie original. Is she not the most gorgeous little girl in the world? And talented. Obviously.

And here is August and Levon's take on Maggie's Bean Song.

So, okay. I'll be talking to you tomorrow from my always amusing and slightly cleaner porch. 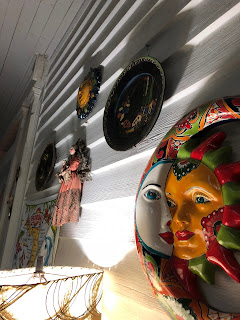 Hopefully, I will be less premenstrual (Hahahahahahahahaha!) and far more sanguine about things. If I take a good six or seven mile walk, I am certain that I will at least be too exhausted to gather the energy to be disappointed in myself.