Well, y'all, I have injured myself walking.
It's not my joints.
It's not a knee.
It's not my feet and I didn't fall down and break anything.
Nope.
I have chafed my thighs to the point where even walking from the kitchen to the porch feels like someone is taking a hot-roasted cheese grater to my thighs.
Oh Lord. It's funny/not funny.
And the thing is, I don't really have huge thighs. They are relatively thin but where my cotton Jockey big girl panties end, I am damaged.
I was having a great walk this morning. I took a road that I don't usually take for more than half a mile because it isn't shaded after that but today it was so overcast that I just kept on going, shade not being an issue. It was a beautiful walk and I was feeling strong and ready to cover another seven miles and I saw these great cracker cows. 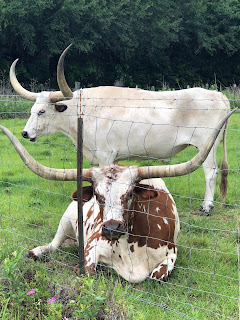 Or bulls, or longhorns, or something.
They were unperturbed by me and if I had those horns, I would be pretty unperturbed too. I like this shot because it shows both the spread and the way they curve backwards.
And I was walking and I was groovin' and checking out the sights and then it started raining a little and I turned around and by the time I'd walked five miles my thighs were in serious trouble. I swear, I thought blood was going to start running down my legs.
It did not but I didn't quite get my seven miles in although I swear, I easily could have if there had not been that fire down below.
I almost wanted to hail the mailman who travels about in his little Suburu whom I have become big waving buddies with as we cross paths over and over almost every morning for a ride to my car but I do have my pride, although it would not appear so, having written about it all here.
Plus, he probably isn't legally allowed to do anything like that.
I did get back to my car and I was going to stay home today but discovered that Mr. Moon and a carpenter buddy of his were going to be here all afternoon working on the bathroom and so I decided to meet Jessie in town to go to Costco but of course first we had to get lunch. It was pouring rain when we were done so I ended up sitting in the Jessie's car while she ran in to Costco and got the things she needed because Levon was asleep and it was just a lot more sensible for me to hang out with the boys than to try to get everyone into the store. August and I read some books and it was quite peaceful, sitting there with him and his brother and all I really needed was some honey and Jessie got me some.

Lily was going to join us but Jason had rescued a tiny kitten in the Walmart parking lot who was about to get run over and so she needed to help tend the little critter.
Such a wee little thing. 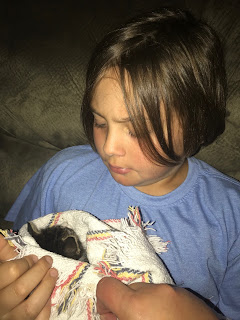 Of course it was covered in fleas and probably has worms and has goopy eyes but what can you do? Jason is so tenderhearted and could not bear the thought of the little cat getting run over and there you go. It was the right thing to do.
They washed him/her and gave him/her some wet cat food and commercial cat milk (did you know that was a thing?) and I'm sure it's getting all the love in the world right now.

And I googled "how to prevent chafing while running" because although I am not running, I am walking at a good clip and the idea is the same, I would suppose. "Runner's World" told me to ditch the cotton because it doesn't wick moisture and so on and so forth and I went to Sports Academy and bought some non-cotton, supposedly non-chafing shorts which are more like underwear and which I will be using like underwear under my cargo shorts because I ain't giving those up. I need pockets, people! I carry my keys, my phone, some gum, my sweat rag- you know- stuff. Plus, if you think I'd go out onto a public road wearing nothing but that garment on my lower body you have lost your mind.  I also bought a product called Body Glide and oh, boy am I excited about using that!
Yes. Yes I am.
But that will not be tomorrow. I have to let the wounds heal.

And that's been my exciting day.
It has been reported that Levon can now officially crawl. I asked August about this. I said, "So, can Levon crawl now?"
And he said, "Yes, and he can walk."
"Really?" I asked. "Your brother can walk?"
"Yes," he said again in the most sober and sincere way.
"Well, that's cool," I said. And before we can all wink and nod, it will be the truth. 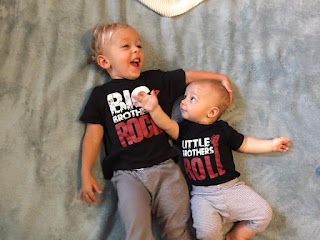