I'm Just A Little Bit Sick Which Is A Huge Relief 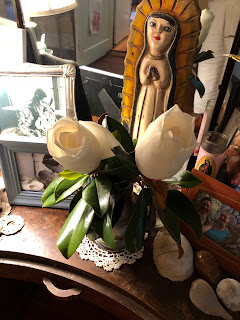 So yesterday I was whining about how wimpy I've been on my walks this week, how the heat and humidity have just slayed me and how I had NO ENERGY and blah, blah, blah and suddenly, I realized after I posted that I am sick.
Yep. I'm so rarely sick with anything that it takes me awhile to realize it when I am but Jessie and her boys have all had a cold this the past week or so and now I have it too. Sore throat, congestion, cough, aches and pains and no energy? Hmmmm....
It must not be too bad- I mean, I did walk over twenty miles this week but yeah, it wasn't easy and there's a reason.
Well, besides being old and it being very hot and humid. But it would appear that I am not dying which is what my anxious old woman brain always tells me is happening if I don't feel well.
"Yep. It's finally happening. You are dying. Get your affairs in order. This is a terminal illness. Code red. Code red. Code red."

I did let the chicks out this morning and I'm not sure they all took advantage but some of them surely have. Right now I'm waiting to see if they can figure out how to get back in. Life is not easy for young chickens and there is a lot to learn. I saw Vera (or was it Viv?) scratching in the same space as Darla who reached over and beaked her head and thus, the pecking order is already being established.

Anyway, Jessie and the boys came out and we had a Monticello outing. We went to our favorite place to eat which is called The Rev cafe and Jessie got a blackened redfish sandwich and I got a chicken salad sandwich and it was delicious. Here's the view from the Rev. 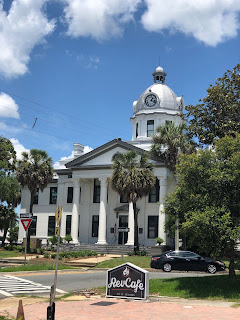 Jefferson County Courthouse. Stately, isn't it? The clock tower bells chime on the hour and traffic goes politely around the round-about and stops for pedestrians. Monticello is pretty darn cool in some ways.

After lunch of course we had to go to Wag The Dog, a thrift store which supports the humane society where we always find treasures for cheap. August got to play with toys and so did Levon and the cranky old lady who doesn't like kids to play with the toys wasn't there so all was well. Here's August wearing roller skates and holding a telescoping Mickey Mouse light saber. We think it was a light saber. 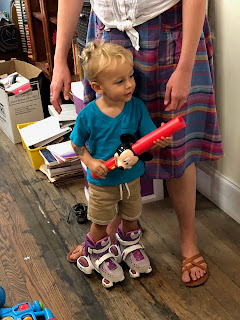 His little legs were just going everywhere and he was laughing and laughing.

I got some nice old dishtowels, the kind that are made of good heavy cotton, a large vegetable ristra, 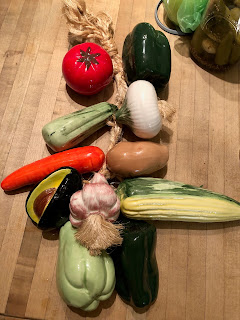 and a book. I saw a lamp that I liked but Jessie and a friend I texted the picture to both said, "NO!" 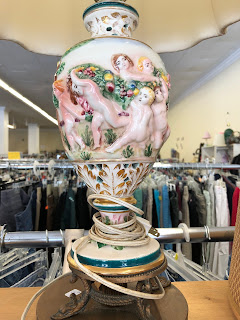 The shade was really nice and dang it, I think I might go back tomorrow and buy it. Fifteen bucks. I'm the queen of funky lamps and that one is truly oldish and why not? Life is short.
Putti are simply under appreciated these days.

So that was fun but I was ready to come home and so we bought our cool stuff and stopped at the Farmers Market for green peanuts to boil and green tomatoes to fry. 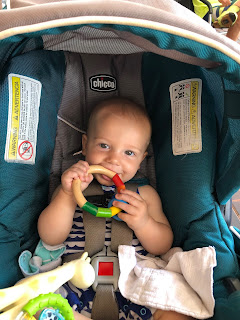 We're supposed to be getting a sub-tropical storm this weekend. Sub-tropical. Hmmmm...
What that means, supposedly, is that we're going to get a bunch of rain. Right now the system is forming over Cozumel and is going to head up through the gulf straight towards us as these things always do. Hank and his cohorts are on Dog Island for the weekend and for their sake, I hope it's not too bad. Thank GOD that Rachel is going because she planned and organized the food and supplies and so I know they won't die of hunger or thirst if they get stranded out there because the boat which transports them can't risk the seas.
Let us wish them luck. Going to the Dog is always an adventure.

In sad news, Mick does not seem to be doing well today. He has been eating and moving around but his walking seems more difficult and he's spent a lot of time laying down which is not usual for him. Or for any chickens, really. Unless they're laying down and taking a nap in the sand or dirt, they are on two legs, walking about and scratching or searching for new places to scratch.
I'll let you know how that goes.
Not to be heartless but I wonder if my neighbor would give me Dearie The Rooster back? Although I have no idea how I'd catch him.

And please note those magnolias in the first picture. Mr. Moon brought them home to me today and my hallway smells like lemony heaven. I'll take a picture tomorrow when they open for the daylight.