They Were Proud Of Their Crab Claws

We never made it to Trader Joe's today. After a lunch and a quick swing through Whole Foods, both Lily and I, not to mention the boys, had had enough retailing and we still had to go to Costco.
Whole Foods simply overwhelmed me. I didn't even look at the prices except for what they were asking for their stone crab claws. Want to hear? For the colossals, they were asking (and I suppose getting) $49.99 a pound. A POUND, PEOPLE! No, I didn't buy any. What we did buy was two bunches of "living" basil (which I came home and planted in dirt- why the fuck not? it has roots) and a small pumpkin for Owen to have as his own. It was just overwhelming and once again, I was amazed at what we Americans think of as healthy food as I looked around at all of the packaged, processed goods. Look- just because something is made out of lentils instead of potatoes, if it's fried and salted, it's not going to be that good for you. Even the hot bar's sliced and grilled or baked or whatever-it-was squash was swimming in oil and I kept thinking of back in the day when I did Weight Watcher classes and how people would cry and moan because all they'd been eating were salads and yet, they weren't losing weight and when I asked them what constituted a salad in their world, would not be surprised at all to hear about the cheese, the croutons, the olives, the eggs, the beans, the half a cup of "lite" ranch dressing.
"Might as well get the hamburger and fries," I told them. "Less calories."
Somehow, just the very presence of lettuce (or these days, kale) makes one feel virtuous and that's crap and we know it.
Well, whatever. I will probably go back at some point and be stunned and amazed at the different brands of almond milk and hummus and so forth and I'm really looking forward to my virgin journey to Trader Joe's which everyone seems to love.

Costco was Costco and we made it through there without incident. Well, okay, there was a little more yogurt smoothie and hot chocolate on the floor after we left than before we got there but hey! No blood, no foul. Lily went to work and I stayed with the boys for awhile and it was a sweet time. While I was there, Billy and I did a little texting and you know how much I love Billy's texts. It's about to be Waylon's birthday and we were discussing his little party, among other things. 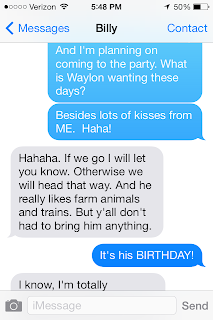 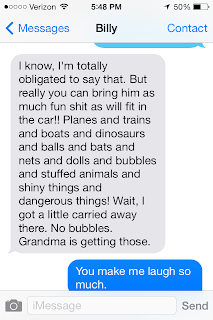 Oh, Billy.
If only he would start his own blog. My god. He would be famous in a month.

Well, it's one of those evenings where I am savoring the prospect of taking a shower and getting in the bed under my fifty-eight pounds of covers and reading for awhile. I am looking forward to that with almost obscene anticipation.

Not as obscene as someone paying fifty dollars a pound for crab claws, but that's a whole other world inhabited by entirely different human beings than I am personally familiar with and when Mr. Moon and I move to Apalachicola, should that day ever come, I will go out in the boat and pull crab traps with him and I will eat those crab claws with lusty glee.