There Ain't Nothing Bigger Than Category Five 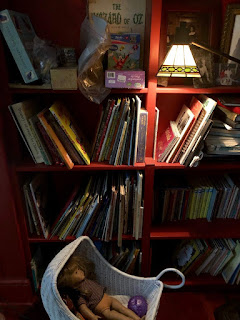 When the Weatherfords got here this morning August ran right past me with barely a glance looking for his Boppy. Of course. He wanted to go ride the tractor. As did Levon. And so while I made pancakes and visited with Vergil, the boys and their grandfather and Jessie checked out the tractor which has been repaired and is running fine.
It was so good to see the four of them. My daughter and her husband, their two boys. We had a delicious breakfast and pretty soon Mama and Daddy left to go home and unpack and settle in and the first thing on the agenda here was TV watching. Before they even left August informed Boppy that he'd already put his chair back for him. In the reclining position, you know.
And so a little TV was watched and then we moved on to other things. Levon has grown so much and is talking up a storm. He spent at least twenty minutes wheeling that little carriage around. He likes to "run in a circle." And so he does. He is no longer as attached to his shovels as he was but he did carry around a book on dump trucks most of the day. We had to read it to him at least a half a dozen times. 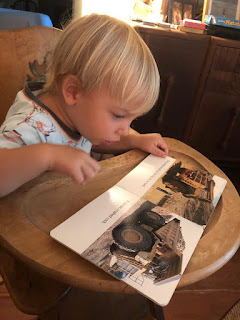 Here he is poring over it while his brother made a button necklace. 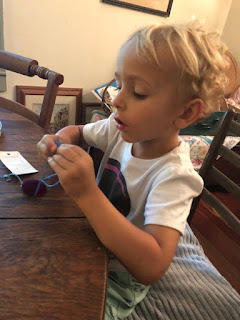 We all helped to put a giant floor puzzle together. Of course it ended the way it always does with the kids running about and the adults obsessively looking for the pieces to complete the damn thing. But hey! There were a hundred pieces! 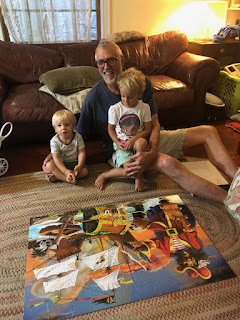 Then it was back outside for more tractor riding. Levon could not bring himself to do it. He just stood beside it and said, "Tractor." Over and over again. I think he was overwhelmed by vast amazement. August rode it though. 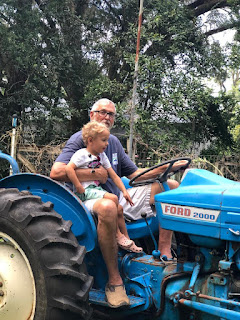 And then both of the little guys watched the big guy clip jasmine and then the fence it was on which had been flattened about a year ago by the giant tree falling during Hurricane Michael so that Boppy could use the tractor to drag the piece away to roll up so that he can mow where it had been. This was a very exciting project. Boppy had to hook the tractor chain onto the fence and pull. August was so excited, "Come on, big boy!" he said to his grandfather. And come on they did and now the piece of fence is all neat and tidy and ready to be taken to the dump although how Mr. Moon is going to get it on the trailer or in the truck (too big for that, I think) I do not know. I suppose the tractor will be involved again.

After all of that we were ready to come back into the house and drink water and cool off and lay on the bed and read a few books. Which we did. By then it was after four and Boppy took a shower and then we packed up the boys' things and put them in the car seats that Jessie and Vergil had left in my car and Boppy drove them home.
They were both very tired. August even cried a little as I was putting him into his seat.
"Why are you crying?" I asked.
"I'm not crying!" he said, tears running from his eyes.
"He's fine!" said his grandfather. "Tell your Mer good-bye."
I promised the boy that we'd see him again very soon and we will.
I sent them home with boiled peanuts and pineapple upside-down cake. Mr. Moon has a friend who is getting pretty old and he just took a tumble the other day and I was asked quite sweetly if I would make a pineapple upside-down cake for him because he loves it. I said I would, of course, and by god, I screwed up the first pineapple upside-down cake of my life. I have no idea what happened but that cake just didn't rise and was as dense as pudding. Still delicious but it wasn't very impressive to look at so yesterday I made another, this time FROM A RECIPE and it looks much better but I doubt it tastes as good as the pathetic one I'd made the day before. So the sad cake gets eaten by us.
Oh well.

So that was all beautiful and loving and August even let me scratch his back for him and sort of half-way cuddled with me and Levon let me hold him on my lap and also showed his enthusiasm for an episode of "The Mighty Little Bheem" by pounding on my leg. I'm just going to come out and say this- that kid is such a BOY! A joyful boy.

But I tell you what- my gut hurts reading about what's happening in the Bahamas right now. They've had wind gusts up to 220 mph. That's...just...unbelievable. I've been watching, sporadically, a live web cam of the storm which you can find here.
It gives you a sense of how the winds slow a bit and then come back with furious intensity. And honestly- that doesn't begin to give you an idea of the terrifying reality of what it is really like. I heard one short recording of someone who was sheltering in a resort, I think, and the plywood was peeling off the windows and they were wrapping the children in blankets to try and protect them. I saw another short video that someone took when the eye passed and cars had been literally rolled down the streets.
The Bahamas are not going to be all right.
And we have a president who is so deep in dementia that he claims he's never seen a Category 5 hurricane even though this is the fourth Cat 5 hurricane we've had since he took office. It almost, ALMOST makes me feel sorry for him but it's impossible to feel sorry for Donald Trump and it's even harder to have any sympathy at all for those around him daily who are not coming forth and telling the truth about what's going on in the Oval Office.