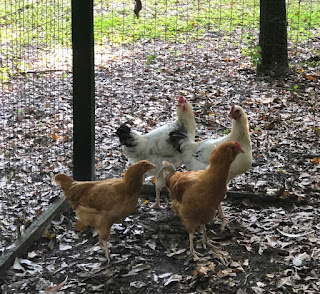 Those are the four remaining of the five chicks hatched by Darla a few months ago. Can you tell which one is the hen and which three are the roosters?
Hoo boy.
Here's something interesting- I have noticed a great reduction in the crowing around here. Even from Liberace. It's as if none of the boys wants to be challenged by the others. The new ones because they are below Liberace in status, age, and size and perhaps Liberace because there are three of them and only one of him. I don't know. But at this point those four are their own flock and stay mostly separate from the others. If all of the roos start going after Sissy (that's what I have named the one hen) they're going to be eliminated and the NO MAN LORD guy down the street is going to be eating rooster stew again.
That's the cruel truth.

That's enough for now.
It's been a quiet day here in Lloyd. I walked on White House Road. I cleaned out the hen house. I beaded part of a butterfly on Maggie's dress. Tomorrow I am going to babysit for August and Levon for a little while at their house. August has promised to show me his library books and told me that I can borrow one if I want.
Who knows? I may.

Last night I dreamed of my stepfather. It was a nightmare. It was a call-911-nightmare. After over fifty years I still have these dreams. The past is never the past, is it? Not the bad, not the good. It is all inside of us no matter how far we have come, no matter how much we have grown, no matter how much we have changed.
I suppose we make peace with it if we can.
But we still remember whether it's the feeling of panic and fear or the feeling of despair as we walk along a beach in deep fog, the waves rolling in and out, wondering if we are the only person in the world on this beach, to feel these things, to have no idea where we are going.