A Simple Trip Down A River (Possible Trigger Warning) 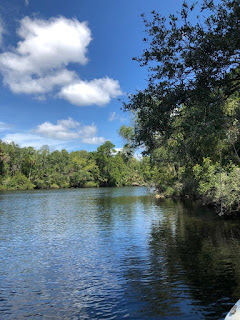 The Weatherfords and the Moons took a little boat trip down the St. Mark's river today and it was practically perfect. It would have been entirely perfect if the temperature had been about ten degrees cooler and perhaps if we'd caught a bunch of mullet but one cannot ask for everything. Compared to the last time I took a trip down the St. Marks wherein it was horribly hot, yellow flies tore us up, the boat didn't run right, the trailer got a flat tire, and the place we ate supper was not air conditioned and had biting flies, it was indeed practically perfect.

August reminded me of a tiny sailor who could climb the rigging up to the eagle's nest if we'd been in a sail boat. He had the time of his life. 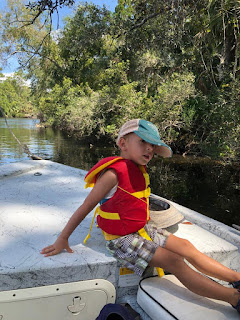 Levon, however, was doubtful about the entire enterprise from the moment he stepped on the boat. We do not know why. He insisted that his mama hold him almost the whole trip. 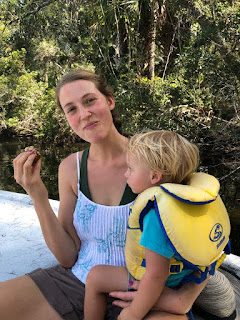 We weren't going fast, barely puttering along for the most part, and he loves going out in the kayak. Whatever was bothering him seemed to require all of his vigilance. He didn't want to nurse, he didn't want to eat. He just wanted to be held.

We saw osprey, one who seemed to be escorting us down the river. He or she would fly ahead of us, perch on a tall limb over the river, and when we caught up, fly ahead again. It was interesting. Perhaps WE were interesting to it. We saw turtles, sunning on logs who would plop off as we approached. I felt bad about disturbing their sunbathing but then I realized that falling off a log into the water is probably not that big a deal to a turtle.

When we got to the bridge we anchored the boat and jumped in the water which was heaven. And oh- we'd seen an alligator AND a water moccasin right where we anchored but Vergil made sure to make a big noisy splash and we felt sure that we would go unmolested and we were. August paddled about in his life jacket and his dad let him perch on his belly as he backstroked around. They looked like an otter and its young. Levon came out of his funk and squealed, actually and truly squealed with joy in the water. He was so happy. Jessie held him as they cooled off and giggled. I treaded water and declared that I would now be cool for the rest of the day which proved to be untrue but it was wonderful while it lasted. After awhile we all clambered back onboard and headed back to St. Marks where we'd put in.

Levon finally let his daddy hold him and he helped drive the boat. 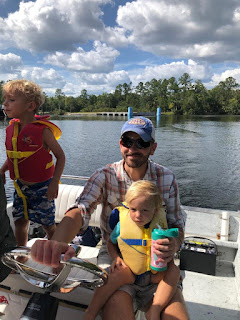 It was a sweet afternoon. 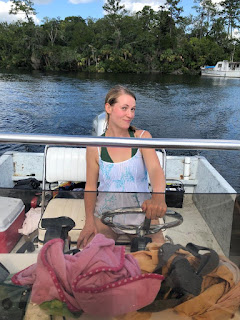 Jessie got to drive some on the way back. 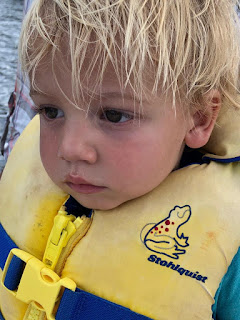 And here's my sweet somber boy.

When we got back to the marina where we'd put in, we saw something that made us all laugh.
Well, the adults, anyway. 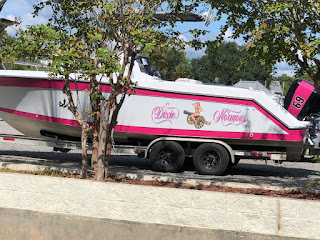 Can you read what it says? Figure it out yet? 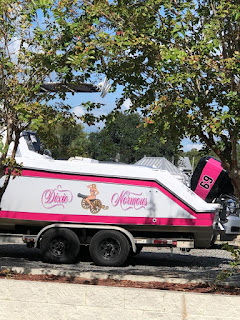 Add in the boat's engines and we can only assume that this is indeed a party boat.

Both boys fell fast asleep on the way home as I knew they would. Four hours in the sun and in the water is a lot for anyone, especially the little guys. I can tell I got a little too much sun even though I used sunscreen.
For once.

I thought a lot today about Sunday boat rides and how I suppose I have a little bit of PTSD about them. When I was a child and my mother married the man who abused me, Sundays were the worst days. Sunday mornings were when the abuse mostly happened. Not always but mostly. And then we'd go to church- our happy little family- and then we'd often go out on the Sebastian River and the Indian River in the stepfather's boat.
I can still remember the registration number of that boat.
FL6955T
Before he came into the picture, I had loved boat rides. Friends of my mother's would take us out and everything about being on the river thrilled me. The jungle flying by us, the mysterious brown brackish water where I knew porpoise and sharks and giant rays swam. I had seen them. I can remember being fascinated by the wake of the boat, the white bridal path of it, and sometimes we beached on one of the dredge islands in the Indian River, sometimes even Fossil Island where mammoth teeth and vertebra and other bones littered the sandy ground.
Those times, before the stepfather, were magical.
But when we were in his boat on a Sunday I was a mass of confusion and (although I could not define this then) burning anger. I was a damn smart nine-year old, ten year-old, but I was not smart enough to know how to think about what had happened on those Sunday mornings. I knew something was very, very wrong but no one seemed to notice, much less care, and I did not even begin to have the words to describe what was going on. There had been nothing in the world that I had wanted more than a daddy. A man to make my sad mother happy. A man to be a father to me and to my brother. A man to make us into a whole family.
And that had happened. Here we were- on the river in a boat- visible and visual proof of what a good, loving American family did on a Sunday afternoon.

So for years after, decades and decades after, being out on the water with my own family, especially on Sundays, brought back those feelings of confusion and of anger. Of course I had more insight by then but insight and wisdom can't erase such deeply engrained feelings.
But I've gotten better. And although I think of those things as we eat sandwiches and float past another jungle, they do not cause me to disassociate. I can stay firmly where I am and today, when August was looking at the spray from the engine and he said, "Look! Rainbows!" I could look and see rainbows and be as thrilled as he was to see them.

I am so lucky in so many ways. This is just one of them. This ability to find pleasure in what once brought rage and despair.

Life is something, isn't it?