Mr. Moon just got home a little while ago. He had a great time in Tennessee with his old friend and his family and I'm glad to have him home. He's going to get some of the black beans I made yesterday. I wanted a bowl and knew that by today they'd be even better. This is the recipe that I got from the New York Times cooking app and it's so good that it's worth the cost of the entire app. That's my opinion, anyway. I thought I'd posted the recipe but I can't seem to find where I did, if I did, which I probably didn't. The name of the recipe is Best Black Bean Soup and it just is. As always, I love to read the remarks left on the site of the recipe and of course lots of people wrote in about how THIS isn't how you make black bean soup but THIS is, and then proceed to give their own recipes but even though I have no problem with altering a recipe to suit your own taste, in this case I barely change a thing and wouldn't. It's just that good.
Here's what a bowl of it looked like before I ate it. A little messy but real. 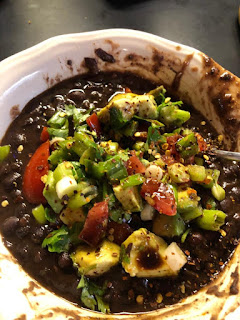 I'd put chopped avocado and green onions and tomatoes on it with some balsamic vinegar and it was pretty much heaven.
Here's a link to the recipe.
You may get firewalled but you may not. You can also try googling "Best Black Bean Soup" and see if that'll get you there. And of course, if you have the money and the inclination, the app is worth it, in my opinion. I get a lot of inspiration there.

I don't know if yesterday's post got me all talked out or what but I'm not feeling very inspired today. I haven't had a lot of energy although I did get a few things done. The chickens have clean nests and the bed has clean sheets and I took everything out of the refrigerator and wiped it down and now it's all sparkly again. I still think of that refrigerator as brand new but it was getting sort of messy as refrigerators do. It ended up being a National Holiday for the chickens because I threw a lot of stuff out. Well, not that much but a lot for twelve chickens. They got many tasty treats like mozzarella that should have been eaten two weeks ago and crackers that have been lurking in a back corner that no one is ever going to eat.
But chickens will!
So they were happy little dinosaurs. I'll be glad when they stop molting and start laying again. I got exactly one egg today and it wasn't even in a nest but up on a little shelf where one of them sleeps. I could keep chickens for a hundred years and not understand exactly how they think.

And so that's about it, I guess. Nothing new. Nothing exciting. Which is fine with me.
I'd be jumping up and down with excitement over the fact that it would appear that Trump has finally done it this time, enlisting Ukraine to get him some dirt on Joe Biden but how many times has it looked as if finally, FINALLY the man will be brought down? And then wasn't? Wasn't it Reagan they used to call the Teflon president? Haha! Oh god, how I disliked him and thought him a bumbling fool and then George Bush came along and pushed the bar even lower and I thought that surely he was the worst president imaginable and now I almost look back on those days with nostalgia.
Not really. Well, sort of.
After Trump got elected after saying what he said about grabbing women by the pussy I've just had to realize that I don't live in the country I thought I lived in and that lesson has been pounded into my head like John Henry pounded steel into rock over and over again.
It's to the point that I can't even put it all on Trump. Let's face it- the man is obviously in the throes of dementia. He cannot construct a sentence that makes sense. And as they say, dementia just makes a person more of who they always were. That may or may not be true but with Trump it seems to be. A racist, sexist, narcissist.
But supposedly there are people in the senate and house that do have their wits about them and why they're allowing this travesty of an administration to continue is beyond me.

I'm done. I'm going to go stir the black beans I've got reheating on the stove.