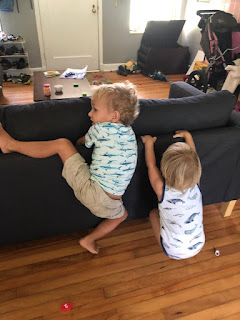 I babysat for two wild boys today while their mama went and got a massage from the lady who gave me mine a month or two ago. The one who works specifically on problem areas. I haven't been back although I said I would, for the simple reason that making appointments is another of my neurotic inabilities. I actually asked Jessie if she'd make an appointment for me which she did and she made one for herself too. I think this therapist is working on at least half my family now. She's really good. Anyway, Jessie's appointment was today and so I went over and hung out with the little guys and we had a good time. They're truly good boys and we read some books and had some laughs and Boppy came over to eat his lunch with us so it was sort of a party. While I was there I was thinking of how Levon used to be so wary of anyone but his mother or father and how easily he accepts his grandparents now. He pooped right after Jessie left and I said, "Come on, let's go change your diaper."
"Mama do it," he said.
"Mama's gone bye-bye. I'll clean your poopy butt, boy." I told him.
He thought about that for a minute.
"Auga do it," he said, and we all laughed. I can only imagine that August could change his brother's diaper if push came to shove but it would be highly amusing to observe.
And then he graciously allowed me to do the honors with Auga watching closely to show me where everything was. After I'd gotten Levon's butt all nice and sparkly clean and diapered again and set him on the floor, August climbed up on the changing table like a monkey.
"This is Levon's changing table," he told me. "Mama and Daddy are going to get a more stabler one for me."
"Oh yeah?" I asked. "Do you want help getting down?"
"No," he said, and proceeded to show me that indeed, he needed no help at all.
They both climb like monkeys and when I asked them to pose for a picture before I left, August wouldn't show his face but demonstrated how he climbs the back of the sofa and Levon tried too although finally he would let me see his pretty face and said, "Cheese!" 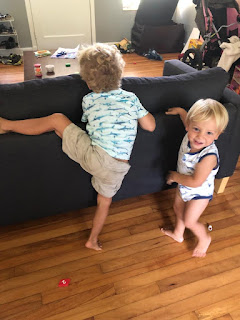 And that was the most important thing I did all day long.

Jessie showed me the bananas they have growing in their yard. They have two stalks of different varieties that look like they're going to be amazing. I am so impressed! Their yard gets a lot more sun than mine does and they've planted quite a few fruit trees.

So yeah, it's the anniversary of 9/11 and just like everybody else in this country I have my own stories of that day. I am not one to observe anniversaries like this. A lot of people are remembering how the country came together after that horrible tragedy and bemoaning the fact that that did not last but I don't even like remembering that part. It seemed to me that it was the beginning of this blind jingoistic patriotic phase we're in. People were buying and flying American flags and keeping survival supplies in their garages and basements as if having a week's worth of water and MRE's and plastic to seal windows and doors would be of much use in case we were further attacked as a nation. There was no glory involved in that day. There was chaos and there were undeniable acts of heroism and there was a president and a vice president in a bunker and there were rumors and there was panic and fear and no one thought we'd ever laugh again, and then the president told us all to go to the mall and shop like good Americans do and Saudis with close ties to the White House were flown out of the country on an emergency basis even though 15 of the 19 hijackers were Saudi and of course we ended up going to war with Iraq and nothing has been the same since.

I hear that just minutes before Trump and his woman observed a moment of silence in remembrance today he was tweeting about how the lamestream media is fake-newsing about polls and how he should get a third term as president. Also, Melania posted a picture of herself wearing a coat which, from the rear, showed white stitching and a button tab that some claimed represented a plane flying into one of the Twin Towers but to me looked looks more like a you-know-what pointing up to her you-know-what. 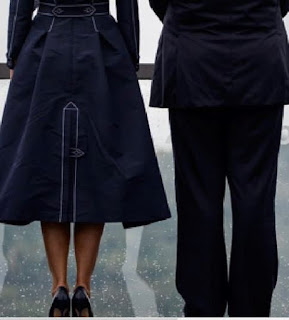 I mean- who said this was a good choice?

Nothing is as it seems.

Here's a hurricane lily in my backyard. 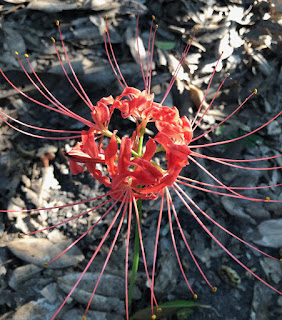